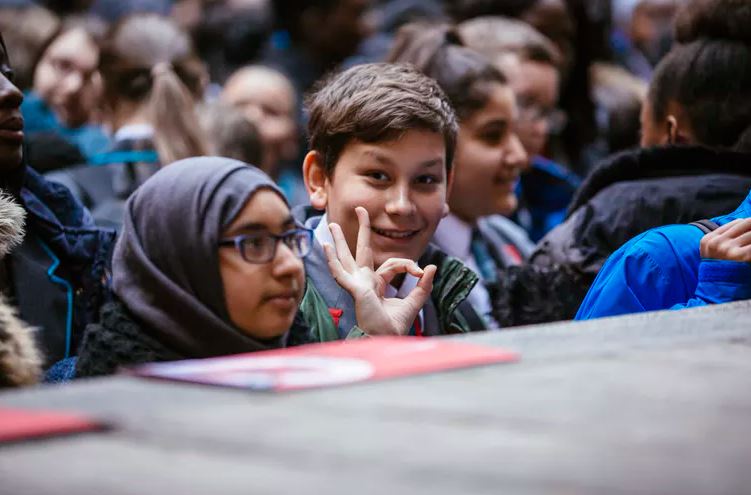 When you think of inner-city teenagers, what springs to mind? For many, it’s hoodies, video games — and probably hating Shakespeare. But my research proves that this stereotype is far from the truth.

Shakespeare holds a contested place in the English national curriculum as the only compulsory writer to be studied between the ages of 11 and 16. This imposed curriculum attempts to situate Shakespeare’s plays as part of national culture, rather than purely as an exemplar of high art. But teens are rarely asked directly about their experiences of education, and about its relevance to them.

Instead, they are often represented as a homogenous group who are bored and resistant to studying Shakespeare, particularly when it comes to struggling with the language he used.

However, my research with over 800 students in four London secondary schools offers a very different picture. I asked these 13 to 14-year-olds what they think and/or feel when they hear the word “Shakespeare” — and some of their answers defied expectations.

Many students told me that they actually enjoy studying Shakespeare in school. From comments such as “I feel happy because I like most of his plays,” to “I feel excited because Shakespeare was the best writer ever […] a legend or genius,” they expressed levels of interest in Shakespeare that are rarely acknowledged.

These students also did not see the language as a barrier, but as a challenge to be embraced. One commented: “I also get quite happy because we do not often look at texts with old English.”

In this large cohort of students, some comments stand out, showing how varied and individual their responses are. One described Shakespeare as “one of my inspirations for writing poetry,” while another said that “although I don’t really like English, I like his plays a lot.”

Teachers seem to play a key role in developing a positive attitude in some of their students. One student said that “all the work I’ve done on Shakespeare has been interesting and fun,” while another said she “really enjoyed the last play that we did.”

This study did not look in detail at what actually happens in the classroom, but many of the students’ comments suggest that having the confidence to approach a Shakespeare text with a positive attitude partly comes from the teacher’s attitude to him and his work.

‘Be not afraid of greatness …’

In addition to the wholly positive comments, some students demonstrated a more mixed response to the subject. One student told me that “sometimes it’s interesting and sometimes it’s just boring ‘cause in Year 7 I remember we did this one play for a very long time and it was just kind of the same thing every lesson for a double lesson.”

Here, the lessons were clearly not varied enough to hold this student’s attention all the time, although the comment suggests that the student knew that studying Shakespeare could be interesting and fun, even if it isn’t always like that in practice.

For others, the choice of play is key: “Some Shakespeare plays are more interesting than others, in my opinion.” One of the students I interviewed also articulated a clear tension in her attitudes towards studying Shakespeare. She said:

The good part is because everyone goes through different stuff, some people can relate and they can feel like they’re not alone or like this has happened before and studying Shakespeare makes you see the world differently, […] and the bad thing about it [is] learning how to write in the Shakespeare kind of structure when it won’t be useful in the future.

For a number of students, there are perhaps inevitable negative connotations attached to the word “Shakespeare.” Some did describe Shakespeare simply as “boring,” but others explained their reservations in more detail. One said: “I feel like I’ve heard the word Shakespeare too much and that I don’t want to talk about him.” Another thought “about long complicated language that no one understands,” while further complaints were about how “it is unnecessary to learn about as I don’t understand what’s beneficial for us as students.”

Overall, the students involved in this research demonstrated a breadth and depth of response to Shakespeare that counters the generalised belief that teenagers respond poorly to his work. Indeed, used as an introductory question to establish students’ attitudes to Shakespeare before attending a production at Shakespeare’s Globe theatre, in London, I have been fascinated by the variety and subtlety of thought they have demonstrated.

As one said: “I feel honoured that I’ve covered Shakespeare in school, because telling people you have read his plays makes you sound smart.” The sense of privilege inherent in this comment, despite the fact that everyone studies Shakespeare at school, is clearly something to cherish.