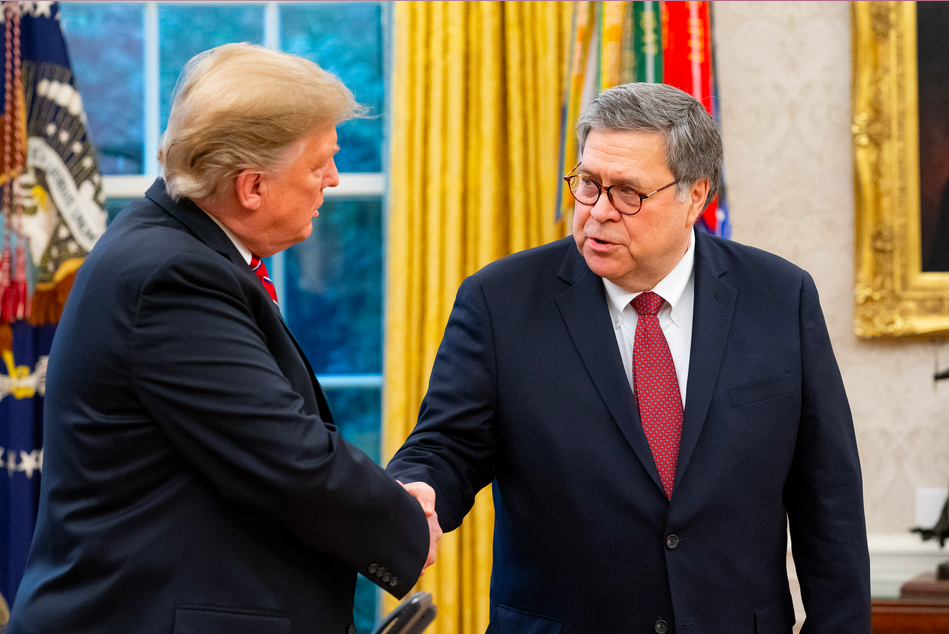 Special counsel Robert Mueller’s report highlights 10 episodes that could be construed as obstruction of justice, although his investigation found no underlying conspiracy between the Trump campaign and the Russian government to affect the outcome of the 2016 presidential election.

Attorney General William Barr held a press conference Thursday morning to lay out the conclusions of the special counsel’s 22-month probe and to explain how he, Deputy Attorney General Rod Rosenstein, and the Mueller team decided what to to release.

Barr noted that he and Rosenstein disagree with some of Mueller’s legal theories regarding possible obstruction of justice by President Donald Trump, but followed them in determining there was no basis for criminal charges.

The attorney general repeated the phrase “no collusion” several times.

Barr explained that although some information in the Mueller report was redacted, it was for established legal reasons such as to protect grand jury material and ongoing investigations, and no redactions were based on executive privilege.

The president’s White House and personal lawyers had a chance to review the report but did not seek redactions, nor did Trump cite executive privilege to shield information, Barr said.

Certain congressional leaders will be granted access to the report without any redactions except for some grand jury information, he said.

As veterans who were his guests smiled and laughed, the president’s audience applauded.

Trump again called for looking into how the probe of his campaign and his associates began.

Before his White House event, Trump referred to the megahit TV series “Game of Thrones” in a Twitter broadside aimed at Democrats and others who have hounded him.

Barr said he plans to answer further questions before Congress and also said he does not object to Mueller’s appearing before and taking questions from Congress. Mueller was not present at the press conference.

After nearly two years of investigation, thousands of subpoenas, hundreds of warrants and witness interviews, the special counsel confirmed that the Russian government sponsored efforts to illegally interfere with the 2016 presidential election, but did not find that the Trump campaign or other Americans colluded with those efforts.

The attorney general’s letter to congressional leaders in late March had revealed that Mueller found no conspiracy between the Kremlin and the Trump campaign, but was less clear about potential attempts by the president to obstruct the investigation

“The report recounts 10 episodes involving the president and discusses potential legal theories for connecting those activities to the elements of an obstruction offense,” Barr told reporters Thursday.  “After carefully reviewing the facts and legal theories outlined in the report and in consultation with legal counsel and other lawyers, the deputy attorney general and I concluded that the evidence developed by the special counsel is not sufficient to establish that the president committed an obstruction of justice offense.”

Barr noted that Trump “faced an unprecedented situation” as he took office and was “frustrated” by opponents’ allegations of collusion, but “the White House fully cooperated with the special counsel’s investigation.”

The attorney general expressed gratitude to both Rosenstein–who previously oversaw the special counsel’s investigation–and to Mueller for how he conducted the probe.

“Thanks to the special counsel’s thorough investigation, we now know that the Russian operatives who perpetrated these schemes did not have the cooperation of President Trump or the Trump campaign or the knowing assistance of any American for that matter,” Barr said. “That is something [for which] all Americans can and should be grateful.”