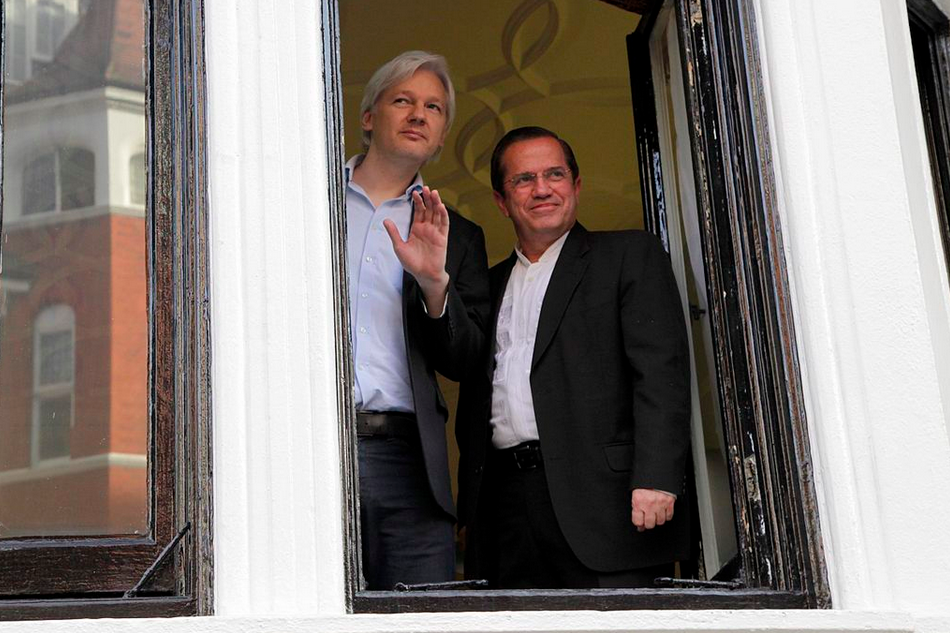 Freedom hath been hunted round the globe. Asia and Africa have long expelled her. Europe regards her like a stranger, and England hath given her warning to depart. – Thomas Paine, “Common Sense,” 1776.

Wikileaks publisher Julian Assange was dragged from the Ecuadorian embassy in chains this morning. The U.K. government plans to extradite him to the U.S., where he faces a charge of conspiracy to commit computer intrusion.

Surprise and relief are my first reactions to the indictment. Assange and his followers worried that Assange would face life in prison or even the death penalty in the U.S. Now it seems the maximum prison time Assange faces is five years, and the indictment notes that the actual sentencing would typically be less.

But there is still a dangerous precedent being set. Can the U.S. snatch up a foreign-born publisher who embarrasses the government, and put him on trial in the U.S.? The government appears to be trying to get around this by arguing that Assange is more than a publisher – that he actively hacked U.S. military computer systems. The case against Assange will hinge on that distinction of whether Assange played an active role in getting the classified information. In the full indictment released by the Justice Department, the government alleges that Assange actively tried to assist Manning in cracking a password-locked military computer system.

For 13 years Assange has been a thorn in the side of the U.S. intelligence and security state, more than half of which he’s spent in de facto exile in the Ecuadorian embassy in London. His Wikileaks site has published classified documents from government bodies around the world, and with a strict commitment to accuracy.

In the process he’s enraged both sides of the U.S. political spectrum. During the 2016 election, Wikileaks released documents proving that the Democratic National Committee intervened to halt the progress of insurgent candidate Bernie Sanders in favor of Hillary Clinton. No matter who you supported in 2016, aren’t you glad you found this out?

In 2010, Assange embarrassed military hawks on the right and left by releasing footage of a botched U.S. helicopter strike in Baghdad that killed ten innocent people, including two Reuters reporters, and injured two children. Tens of thousands of war documents followed from the theaters in Afghanistan and Iraq. They showed higher civilian death counts, disturbing cases of human rights abuses by Iraqi soldiers and police, and a grimmer picture of the progress in those wars than we were being told by either our government or our passive mainstream press.

The U.S. government protested that informants’ lives were endangered by Wikileaks’ release. Assange said he’d tried to get the help of the Obama White House in redacting names, but the request was denied. Despite this, I’m glad someone was brave enough to publish information that revealed the true nature of our foreign military interventions.

The crux of the Justice Department’s case appears to be that Assange actively abetted Chelsea Manning in hacking U.S. military computers. Glenn Greenwald, publisher of The Intercept, notes that the Obama Administration tried to concoct this line of attack against Assange, only to abandon it after concluding that it would damage press freedoms.

Obama DOJ tried to concoct a theory to justify arresting Assange for more than merely publishing docs: such as claiming he aided Manning in the the theft of docs. They found no evidence for it. Trump DOJ will likely manufacture some falsehood to claim it’s more than publishing.

However, the full text of the indictment released by the Justice Department alleges that Assange did in fact step beyond the role of publisher in the Manning case. Line 25 of the indictment alleges that “On or about March 10, 2010, Assange requested more information from Manning related to the password. Assange indicated that he had been trying to crack the password by stating that he had ‘no luck so far.'”

If the Justice Department’s charge of computer intrusion against Assange are baseless, then the implications are ominous. The American government is apparently reaching across the globe to imprison a publisher and journalist who has embarrassed them.

If that’s the case, perhaps Russia should be able to put Rachel Maddow on trial for her endless (and factually inaccurate) harping on Russian collusion conspiracy theories. Or perhaps China should be able to seize Tucker Carlson and put him in a work camp for his series on China’s economic and military threat to America.

I’m joking, but in reality, I’m very concerned where this is leading us.

Are my concerns reasonable, or should we approve of Assange’s arrest? Please let me know in the comments below; I am interested in what you have to say.

UPDATE: Provides further details in the third, ninth and tenth paragraphs about the Justice Department’s allegations against Assange, including the claim that he stepped beyond his role as publisher to attempt to crack a government computer system password.