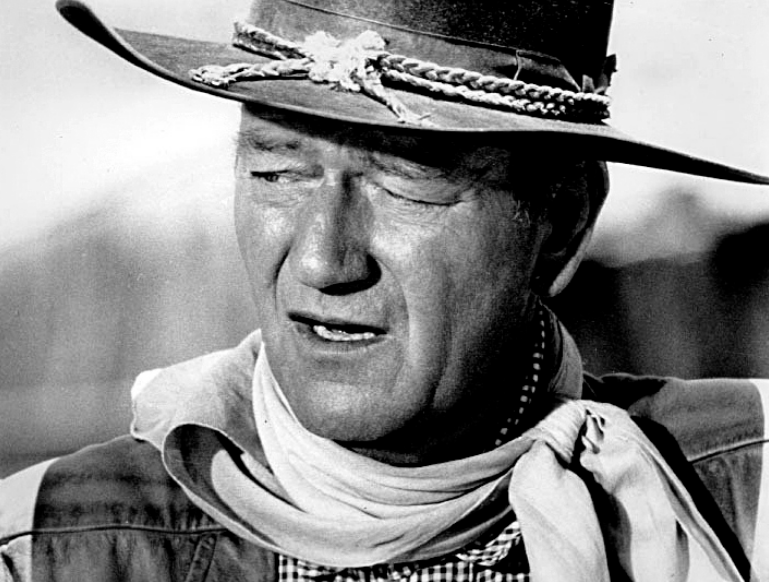 Writes a reader from Southern California: “Apparently John Wayne is the new Confederate statue.” She sent a link to this op-ed column in the Los Angeles Times. Excerpts:

Most people familiar with the life story of John Wayne are aware that the late movie star was a dyed-in-the-wool right-winger — after all, he was still making a movie glorifying America’s conduct of the Vietnam War (“The Green Berets,” 1968) well after the country had begun to get sick of the conflict.

But the resurrection of a 1971 interview Wayne gave to Playboy magazine has underscored the sheer crudeness of the actor’s feelings about gay people, black people, Native Americans, young people and liberals.

This doesn’t necessarily mean that it’s impossible or immoral to enjoy Westerns and war movies starring John Wayne; that’s a personal choice. But it certainly undermines any justification for his name and image to adorn a civic facility.

We’re talking about Orange County’s John Wayne Airport. It’s long past the time that Wayne’s name should come down.

Why? Because Orange County is now Democratic and so ethnically diverse that

it’s hard to justify asking any member of that community to board planes at an airport named after an outspoken racist and homophobe, with his strutting statue occupying a central niche in front of the concourse.

Racist? Homophobe? The Duke? Read the whole thing  to see some genuinely offensive quotes that someone recently unearthed from a 1971 Playboy interview with the iconic movie star, who had been born in 1907.

Is anybody surprised that John Wayne, who made his first film in 1929, held opinions as an old man that people in 2019 would find repulsive? Are we really so childish and philistine that the work of one of the great American film stars of all time means nothing next to some crotchety, bigoted remarks he made in a 1971 interview? Just like that, the man’s name has to come off of an airport because of his ugly opinions. Nobody put his name on the airport because they believed that John Wayne was a progressive humanitarian who celebrated diversity. They put his name on the airport because he was a global icon of the American West, which is to say, of America.

Hey, I don’t even like Westerns, but I believe it would be appalling to drive John Wayne out of the public square. Are we going to start going through old magazine interviews from decades ago to see which other film and entertainment legends we must erase from history because they offend an official grievance group?

I recently finished Scott Eyman’s biography of Wayne. It shows the man in full, raised in poverty in California, attended UCLA but didn’t graduate as he was drawn to the movie industry where he served a long apprenticeship in quickie Westerns, his acting school. After achieving stardom, he never departed from his preference to stay on the set, interacting as part of the crew. Throughout the book, one person after another, often liberals, praise him for his generosity, tolerance and ability to work with all types of people. He was reactionary but always fair-minded towards people in person. Yes, his interviews sometimes revealed his antiquated views, but the man himself was ironically a milder version of the character from the searchers, Ethan Edwards, pictured at the top of your post, who ultimately overcomes his bigotry to do the right thing. To say someone was “of his time” doesn’t necessarily acquit him of wrong attitudes, but no one among us would want to be judged solely on one’s cranky senior comments. The search-and-destroy mission, from our Founding Fathers up to now, will continue among the Jacobins.

This article was republished with permission from the American Conservative.