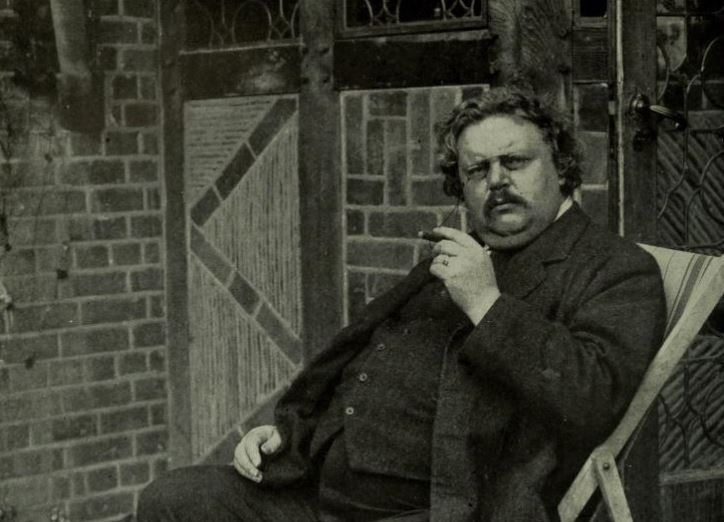 Until his mid-thirties, self-described reactionary G. K. Chesterton generally supported the Liberal party of England. Does that make him a bundle of contradictions? And if so, how big and how contradictory? Let’s take a closer look at both that party and Chesterton’s thinking.

The Liberal party of England was the party of individual liberty and limited government, both at home and abroad. It was the party of Prime Minister William Gladstone, John Stuart Mill, and the anti-Imperialist “Little Englanders,” including G.K. Chesterton. However, in the late 19th century when key members of the liberal party supported the imperial Boer War in southern Africa, all that began to change.

Chesterton was neither a key member of the Liberal party nor a supporter of the Boer War, which he deemed to be a “nasty imperial war” bent on “denying liberty to others.”  After a few years, when the Liberal party lent its support to the nationalization of health insurance, Chesterton had had enough. He was still a 19th century liberal, who was still inclined to look backward as he searched for the good society.  So perhaps this reactionary was not necessarily a bundle of contradictions when he first supported—and then left—the Liberal party of England.

As government power become more centralized both in America and England after World War I, Chesterton was working out his third way alternative to both major parties, an idea that he called “distributism.” With the goal of presenting an alternative to both capitalism and socialism, Chesterton’s idea was to bring about the widest possible distribution of property as the best guarantee of both liberty and equality—and the traditional family. Chesterton also believed that a distributist society offered the best assurance of limited government.

In both England and America the beginnings of this shift in liberal thinking stretch back to the pre-World War I period. An accompanying shift was one of terminology. Nineteenth century liberals were not just becoming 20th century liberals. They were also beginning to call themselves progressives, a term that remains very much with us today.

One such “reform” was the campaign against alcohol, which was sold to the citizens of both England and America as a progressive reform.

An even more troubling progressive reform was the movement for eugenics, or race breeding, an idea that was at its peak in the early 20th century. What had been a crackpot notion several decades before was suddenly highly fashionable, especially among progressives.

Although many, including President Teddy Roosevelt, saw eugenics as a social good, G. K. Chesterton was not among them. Aside from the principle itself, he had serious questions about eugenics procedures and who would control them.  Chesterton thought that eugenics meant that the “deepest things of the flesh and spirit” would demand the “dictatorship of the state,” which in turn meant the “denial of the Declaration of Independence.” Not only would the state of eugenics be one in which “far from all men were born equal,” but one in which “numbers of them might not be born at all.”

In the same year that a certain dictator came to power in Germany, Chesterton devoted an Illustrated London News essay to the “revival of eugenics.” He began by praising one of his long time adversaries, H. G. Wells. In his book, Mankind in the Making, Wells had pointed to an “essential fact, which all the eugenists (had) forgotten all over again,” namely that there was an “essential difference between breeding animals and breeding people.”

After all, cows were bred for milk, not to achieve a “moral balance” of any particular virtues of the cow. And pigs? They were bred for pork, not to “exhibit their portraits as pictures of perfect and harmonious beauty.”

In other words, cows and pigs were bred because they cannot be criticized or praised—or judged on the basis of the “cow concept” or the “pig ideal.” People, on the other hand, can be criticized, and therefore must not be bred.

Among eugenics advocates, the standard dismissal of their fellow man was to declare certain people “feeble-minded” and therefore “unfit.” To Chesterton, the eugenist revealed a feeblemindedness all his own by labeling others as “unfit.”  After all, he asked, just what is one unfit for? More than that, who decides who is unfit?

Chesterton could not avoid the eugenist’s penchant for avoiding answers to such questions. It was better to keep everything in the abstract. And why not? Deep down, “we know how varied, how complex . . . people are.” Therefore, it’s simply not possible to know just what any individual might—or might not—be fit for.  For that matter, how possible is it to breed any alleged unfitness out of anyone?

No wonder that G. K. Chesterton had no desire to be called a progressive. And today? The current progressive barbarity is the bodily mutilation of children as the preferred solution to gender dysphoria. No doubt defenders of such action see it as a modern version of individualism in action. Chesterton the liberal and Chesterton the reactionary would beg to differ. In any case, if this is the culmination of the transgender moment, we can only hope that it is just that, a moment, and one that awaits a G. K. Chesterton to give it the name that it deserves.