Why Ginsburg Fought Discrimination ‘On the Basis of Sex,’ Not Gender Identity 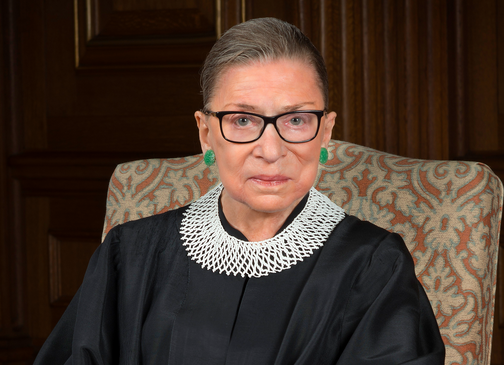 Growing up with only sisters as siblings, we were raised to aspire to all that we were capable of—no “ifs,” “ands,” or “buts.”

So, while Ruth Bader Ginsburg may not be my favorite Supreme Court justice in terms of her jurisprudence, I deeply admire how she proved that she is just as capable as any man to sit on the highest bench in the nation.

That’s why I was so excited to watch the new biopic “On the Basis of Sex,” which dramatizes Ginsburg’s early career and her battle to overcome sex discrimination, not only in her own life, but also in the law.

What struck me about the movie is what it didn’t do—reinterpret the word “sex” in “sex discrimination” to mean “gender identity.”

In the movie, after Ginsburg has finished writing her legal brief in Moritz v. Commissioner of Internal Revenue, arguing that a bachelor who was denied a tax deduction for his mother’s caretaker was discriminated against for being a man, one of her students at Rutgers University must copy the final draft on a typewriter.

As the student presents the final copy to Ginsburg, she timidly mentions that, after typing up the brief page by page, one word was practically jumping off the page: “sex.”

Ginsburg agrees that the provocative connotation of the word might be too distracting and suggests swapping it for the word “gender.” From there on out, all of the characters substitute the term “gender” for “sex.”

That makes sense when you consider the historical development of the term “gender,” which arose in the 1960s as a contradistinction from sex, to indicate the social expectations traditionally associated with one of the sexes.

I was not surprised at all by Ginsburg’s student’s observation about the legal brief. Of course, sex was practically jumping off the page of the initial brief—because the way we determine the sex of any sexually dimorphic species, humans included, is by observing overall organization toward reproduction.

“On the Basis of Sex” confirmed this scientific reality.

Later in the film, Ginsburg is practicing defending her client in a moot court. In this fictional encounter, one of the judges is Pauli Murray, an African-American lawyer and women’s rights activist, who some have speculated would have identified as transgender today.

Even if Murray’s inclusion in the film was intended to suggest that gender identity is the “new frontier” of equality, the dialogue attests to the biological nature of sex.

In the midst of the heated questioning, Ginsburg is asked to explain whether sex discrimination is similar to racial discrimination.

In response, Ginsburg points out that sex, like race, is a biological, immutable trait. She’s right.

The real Ginsburg made this point in her majority opinion in United States v. Virginia, which ordered Virginia Military Institute, the state’s all-male military school, to become coed. There, she wrote that “[p]hysical differences between men and women … are enduring,” and, quoting Ballard v. United States, added, “[t]he two sexes are not fungible.”

The film is also right about sex discrimination. Historically speaking, women were denied many of the same opportunities as men because of harmful stereotypes about men and women.

Stereotypes, such as that men are better at math or that women are too emotional to practice law, directly undermine equality between the sexes—and women are most often the ones who lose out.

The film does a great job capturing the subtle ways that sex discrimination can manifest itself, from Ginsburg’s differential treatment at Harvard Law School to the belittling comments of her husband Martin’s boss.

The film really captures how much has changed for women over the years, as Ginsburg tells the judges in the Moritz trial that 100 years ago, she would not have been allowed to even stand before them.

Unfortunately, that’s not preventing state agencies, activists, and litigators from making the argument that sex can mean “gender identity,” a term that by its very definition is fluid and subjective.

Reinterpreting “sex” to mean “gender identity” would be a mistake from both a legal and policy perspective.

Legally speaking, for our law to remain intelligible, we cannot reinterpret the law at will to achieve new political ends.

No one thought to call into question the meaning of the word “sex” in anti-discrimination law except within the past few years, which suggests that—to borrow a metaphor from the film—this so-called new sense of the term is a change corresponding to the weather of the day, not the climate of the culture.

From a policy standpoint, we ought to take serious pause before implementing sweeping policies that have serious implications for women and girls—whether by reinterpreting sex or adding “gender identity” to anti-discrimination law, as proposed by the so-called Equality Act.

When women are forced to share sex-specific spaces with biological males, this makes women less likely to report sexual assault and law enforcement less likely to get involved for fear of being charged with discrimination.

Women—and men—are also entitled to privacy from the opposite biological sex. In United States v. Virginia, Ginsburg wrote that the Virginia Military Institute “would undoubtedly require alterations necessary to afford members of each sex privacy from the other sex in living arrangements.”

Any policy that claims to create equality for all must take these concerns seriously.

So, what is the verdict on the movie? I found it to be an enjoyable film that reminds us that men and women are more than mere stereotypes—and that women are equally human, and therefore equally qualified to do great things.

I am extremely grateful to those who went before me and fought for my right to vote, to receive an education, and to do meaningful work—and that includes Ginsburg. Judicial differences aside, I think she is a great example of what women are capable of—and “On the Basis of Sex” did a great job of capturing that.