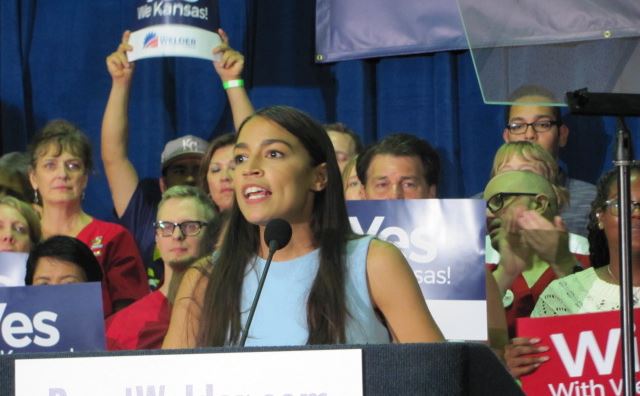 Several Washington commentators kicked off the 116th Congress by rallying behind a newly proposed 70 percent top marginal income tax rate on the wealthiest earners. The 70 percent tax rate figures prominently in the financial equation behind the “Green New Deal” proposal championed by Rep. Alexandria Ocasio-Cortez. While a tax hike of this level is unlikely to clear the Republican-controlled Senate, it also portends a return to highly redistributive fiscal policy as a mainstay for the Democratic majority in the House.

The 70 percent rate would only apply to income earnings above an as-yet undetermined threshold, but it would nearly double the current top marginal rate of 37 percent. Supporters of this extreme hike have attempted to soften its radicalism by appealing to history.

Between 1936 and 1981, they note, the top marginal rate never dipped below 70 percent. In the decade after World War II, it even reached an all-time high of 90 percent on income earnings above $200,000 (or roughly $2 million in today’s dollars). Citing the prosperity of the mid-century United States, these progressive activists contend that our economy can absorb similar confiscatory rates today provided that they are only assessed on the wealthiest earners.

Vox’s Matt Yglesias notes that these rates existed under both Democratic and Republican presidents of the mid-century, while the New York Times columnist Paul Krugman cites the “35 years after World War II” as evidence that top marginal rates in excess of 70 percent were compatible with “the most successful period of economic growth in our history.”

Supposedly, these historical rates dampen the radical nature of the Green New Deal proposal. According to historian Kevin M. Kruse, no sensible person would accuse Dwight D. Eisenhower of socialism on account of the 92 percent top marginal rate in place during his presidency. Although the actual credit for this rate goes to his predecessor Harry Truman, Kruse links its continuation to the popular Republican president so as to suggest that modern objections to 70 percent rates from conservatives amount to unfounded alarmism.

Yet this historical narrative is both simplistic and wrong. It relies upon a confusion between the statutory tax rate (i.e., the number that’s on the statute books) and the effective tax rate (i.e., the percentage of income that people actually pay once exemptions, deductions, and other tax-code incentives are accounted for).

Although statutory rates were extremely high between World War II and the Reagan-era tax cuts, practically nobody actually paid the taxman’s full sticker price on their earnings. Instead, a plethora of intentional tax exemptions, deductions, and legal income shelters ensured that wealthy individuals paid a much lower effective tax rate.

While it might appear that these statutory rates ensured that the wealthiest filers had to turn the majority of their earnings over to the government, effective tax rates indicate otherwise. Persons in the $1 million income filing bracket in 1963 faced an average effective tax rate of just over 40 percent of their adjusted gross income (AGI) for the year.

While economists like Krugman are aware of the statutory/effective rate distinction, it appears to have escaped most commentators who tout the Green New Deal’s 70 percent proposal. This confusion is significant. The mid-century tax system only functioned because policy makers in that era intentionally used a complex system of exemptions, deductions, incentives, loopholes, employment-related benefits, and legal shelters for certain income sources to reduce effective tax rates well below the statutory rates.

A clear example of this may be seen in the Eisenhower administration (1953-61). Eisenhower inherited a highly progressive statutory rate schedule from the New Deal era and the Truman administration. That schedule, including the famous 90 percent-plus top marginal rates, remained on the statute books with only a few minor adjustments until the Kennedy-initiated tax cut of 1964 reduced them to 70 percent. Yet at the same time, the effective tax rate on the $1 million tax reporting bracket (as well as all other high-income brackets) precipitously dropped across the Eisenhower presidency.

When Eisenhower assumed office, the $1 million bracket paid a total effective tax rate of almost 62 percent of AGI. By 1960, his last full year in office, the effective rate for the same bracket sat at 46 percent — a 16 percentage-point cut during his two terms in office. Most of this reduction came from the Internal Revenue Act of 1954, a sweeping overhaul of the IRS that standardized and expanded the aforementioned exemptions, deductions, and tax shelters. IRA-1954 chopped 10 percentage points off of the effective tax rate of several of the top tax-reporting brackets almost overnight, and effective rates continued to drift downward as tax planners became more adept at using these tools.

The IRS did not begin adjusting its tax-reporting brackets for inflation until the late 1970s, but the low inflation of the Eisenhower years makes the $1 million bracket a fairly stable benchmark for the period. Nearly identical patterns are also seen in other top income brackets across the same period.

The takeaway from the history lesson of the 1950s is not the golden age of high taxes and prosperity that supporters of the Green New Deal imagine it to be. Rather, the tax policy of this period strongly suggests that high statutory rates are only sustainable when they are accompanied by massive legal tax shelters that are written into the tax code by design.

These legal loopholes reduced the effective tax burden on top earners to a manageable level. While apples-to-apples comparisons between the 1950s and the tax system today require making several assumptions about the reliability of tax-reported income data, a recent report from the Tax Foundation used an estimate of the top 1 percent income share to calculate its associated effective tax rates over time. Its findings show that this group’s effective income tax rate in the 1950s was only slightly higher than today: 42 percent versus 36.4 percent.

(Note that the Tax Foundation study’s data come directly from the work of left-leaning economists Thomas Piketty, Emmanuel Saez, and Gabriel Zucman. All three are on record lending support to various iterations of the Green New Deal’s 70 percent rate proposal, yet here their own data clash with their policy preferences.)

The high tax rates of the 1950s were, of course, cut during the Reagan presidency, but so were the exemptions and tax shelters that allowed for a relatively low effective tax rate at the mid-century mark. This tradeoff was the centerpiece of Reagan’s Tax Reform Act of 1986 (TRA-1986): a sweeping reduction in top rates, in exchange for closing the loopholes from the mid-century, including those created by IRA-1954.

What this implies for Ocasio-Cortez and her supporters is that a return to 70 percent-plus top marginal rates would likely trigger a disastrous fiscal contraction for the United States, unless it was also paired with the reintroduction of large and intentional tax loopholes of the type found during the mid-century.

In addition to being politically unpopular, a “tax loopholes for the wealthy” campaign would likely chafe with the Green New Deal’s messaging and purported concern for the least well-off. Combined, this makes Ocasio-Cortez’s 70 percent tax-rate proposal into an economy-killing and politically untenable disaster.

Supporters of the 70 percent proposal nonetheless appeal to one more argument for extreme progressive rate hikes. As Krugman points out, a 2011 paper by Saez and Peter Diamond makes the case for a top marginal rate of 73 percent on income above $600,000 on the grounds that it would likely increase federal tax receipts.

A response by three economists from the American Enterprise Institute notes that the Diamond-Saez paper relies on several strong assumptions about the behavioral responses of wealthy earners to tax hikes. In fact, earners restructure their income streams to take advantage of tax-rate variation on different types of earnings (e.g., corporate and capital gains income), or in some cases they even engage in higher levels of tax evasion.

Interestingly enough, Diamond and Saez’s answer to this problem is to further restrict the remaining legal loopholes and aggressively ramp up enforcement to curtail tax evasion. Both strategies would seem to rub against the mid-century story that these same authors tout under the high statutory-rate structure, but also loophole-friendly tax code, of IRA-1954.

Equally revealing though, the entire argument for the Diamond-Saez proposal rests upon a different and highly suspect claim. These authors contend a 70 percent-plus marginal rate on top income earners is necessary to stem the rise of income inequality in the United States — a pattern they causally attribute to the tax-rate reductions of the Reagan years.

This claim is premised upon earlier empirical work by Piketty and Saez asserting that the income share of the top 1 percent of earners essentially doubled between 1980 and 2010.

Yet the Piketty-Saez estimates are themselves outliers compared to other estimates of income concentration in the United States. They appear to severely overstate the rise of income concentration at the top since 1980, partially on account of failing to adequately adjust for the income shifting between different sources of earnings, usually taxed at different rates, that occurred before and after the aforementioned TRA-1986 (a new paper by James Galbraith contains a good summary of the problems introduced by tax-data inconsistency around this reform. See also this study for a discussion of income shifting at the mid-century mark). More recent works including a paper by Treasury economists Gerald Auten and David Splinter show only a modest increase in top income concentrations since 1980, and those mostly disappear after adjusting for post-tax and post-transfer income.

In short, the oft-repeated claim of spiraling inequality in the United States is a myth, premised on outdated statistics and poor historical analysis.

By implication, the case for Ocasio-Cortez’s proposed 70 percent tax rate relies upon that same myth. And while the empirical justifications behind it should be treated as suspect, it will likely persist in the public discussion. The unprecedented spending extravaganza of several closely associated Green New Deal programs ultimately requires revenue, and taxing the rich — even if rationalized with a faulty historical narrative — is extremely convenient for that purpose.