Congress Used to Pass Bipartisan Legislation – Will It Ever Again? 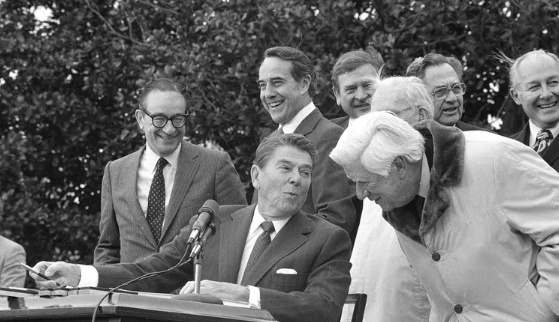 Congress seemingly hasn’t accomplished much apart from a tax cut and criminal justice reform since the election of President Trump in 2016, despite all three branches being controlled by the GOP.

Will that record get even worse now that the U.S. has divided government?

As a political scientist who studies Congress, I find it tempting to look to political history for guidance on what could happen with the new Congress.

Yet, if you look at the previous two instances since World War II where the United States had this form of divided government, the implications for legislative productivity could not be more different.

During the 98th Congress, Republican Ronald Reagan was president, with his party holding a 55-to-45 majority in the Senate and a whopping 103-seat deficit in the House, where Massachusetts Democrat Tip O’Neill was speaker.

Historians generally hold the 98th Congress in high regard for its bipartisanship during a period of divided government. As reported by the political scientist David Mayhew in his landmark study, “Divided We Govern,” its most important legislative accomplishments included:

-The declaration of Martin Luther King’s birthday as a federal holiday;

–Amendments to Social Security to preserve the pension system’s solvency that increased taxes and cut benefits;

–A major revision of the federal criminal code that included increased penalties for drug trafficking and terrorism;

–Reduction of the deficit through a package of spending cuts and tax hikes.

Looking beyond these highlights, the total of 667 laws enacted by the 98th Congress was well above the historical average of about 552 passed per Congress since the early 1970s.

Following the Republican midterm sweep in 2010, Democrats held a 53 (including independents who caucused with Democrats) to 47 majority in the Senate, but trailed Republicans by 49 seats in the House.

This Congress arguably exhibited the most intransigent partisan divisions of the post-war period.

According to the Brookings Institute’s Vital Statistics on Congress, the 283 laws passed by the 112th were the fewest enacted by any Congress going back at least until the Korean War.

One thing should be pointed out in defense of Congress’ low productivity in recent years. Congressional scholar David Mayhew has written in Politico that counting the number of enacted laws is an overly simplistic measure of productivity.

That’s because Congress has increasingly turned to so-called “omnibus” legislation, or legislative packages that sweep up lots of smaller measures into one large bill.

As a result, one important bill passed by Congress today might reasonably be considered as equal to multiple major successes for a previous Congress. For example, Mayhew argues that the Budget Control Act of 2011 and the American Taxpayers Relief Act of 2012, both of which attempted to address the budgetary crises during Obama’s first term, were important omnibus legislative accomplishments.

Nevertheless, the contrast between the two Congresses is stark.

Democrats and Republicans in the 98th Congress compromised to keep the country’s entitlement system solvent for decades. The 112th Congress, on the other hand, was dominated by partisan brinkmanship over debts and deficits that led to the downgrading of the United States’ credit rating, a key measure of the economy’s health.

Arguably, the most important difference between the 98th and 112th Congress was the sharp increase in ideological polarization between Democrat and Republican politicians that made compromise increasingly difficult.

During the early 1980s, many southern white voters retained their loyalty to conservative Democrats in the House and Senate who had heretofore resisted the civil rights movement and integration.

As a result, there was a constituency within the Democratic Party in Congress that was more ideologically predisposed to cut a deal with Reagan. It is notable, for example, that during the 98th Congress, Social Security reform included both tax increases – which Democrats liked – and cuts to benefits – which Republicans liked.

However, it was also in the early 1980s that conservative politicians and voters in the South increasingly aligned with the Republican Party. Largely because of this partisan realignment, by the mid-1990s there was little – if any – overlap in the ideological convictions of Democrats and Republicans in Congress.

In other words, from the 98th to the 112th Congress, fewer and fewer members of the two major parties agreed on potential resolutions to the issues of the day. Compromise became harder to reach.

Given the current political climate, it is difficult to imagine a reprise of the productive 98th Congress. Would President Trump agree to increased payroll taxes to pay for Social Security and Medicare? Would Speaker Pelosi agree to benefit cuts to those programs? Unlikely.

They Did A Lot

It is not at all clear how the controversies surrounding President Trump will affect the behavior of the new Congress.

Probably the closest historical analogues are the various Congresses that exercised strong oversight of the president.

The 93rd Congress (1973-1974) held hearings on Nixon’s role in Watergate; the 100th Congress (1987-1988) conducted an investigation into the Iran-Contra scandal during the second Reagan administration; and the 106th Congress (1999-2000) exercised their oversight when the House voted to impeach President Bill Clinton and the Senate failed to impeach him over the Monica Lewinsky scandal.

All three Congresses maintained reasonably high levels of legislative productivity based on the total number of enactments and the number of important bills that were passed. That happened despite the government in all three cases being divided.

The 100th Congress passed significant enhancements to the landmark Clean Water Act of 1972; legislation to maintain and upgrade the nation’s transportation systems; and ratification of an arms treaty, which required the U.S. and Soviet Russia to destroy a substantial percentage of their nuclear weapons.

The 106th Congress passed landmark banking reform legislation, normalized trade relations with China and wrote rules governing litigation over anticipated problems arising from the turn of the millennium, or Y2K.

How Much Will They Do?

Does the return of divided government in the current Congress mean not much will happen over the next two years? On this question, history doesn’t provide clear guidance.

In terms of legislative productivity, the divided 98th Congress is a positive example of Democrats and Republicans cooperating to do the people’s business. But during the 112th, divided government almost crippled Congress.

Because of today’s high levels of partisan polarization, the unproductive 112th Congress probably provides the best framework for thinking about what to expect in the next two years.

Yet it is also the case that bipartisan compromise was part of Reagan’s pathway to re-election in 1984. It’s an open question whether that is a route that President Trump wants to pursue – and whether congressional Democrats are more willing to make concessions in order to chalk up legislative victories of their own than the Republicans were during the 112th.