Seasteading: The Path Out of Disunity and Bloodshed? 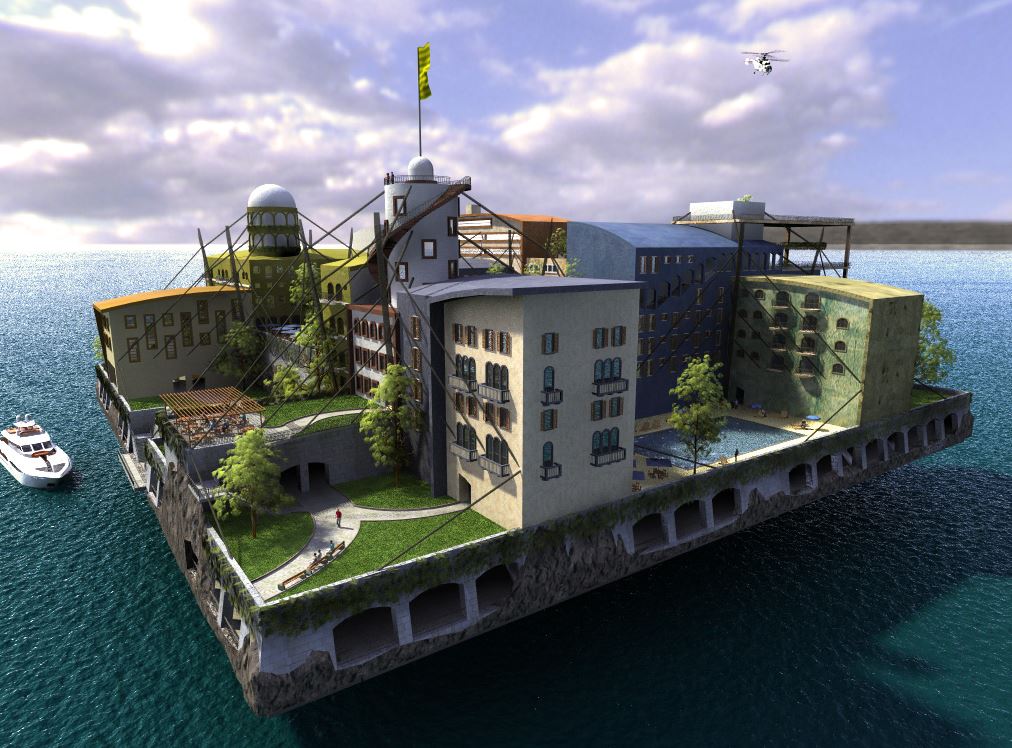 Why do the nations rage?

I don’t know. Maybe because they’re out of ammo culturally.

Recent news reports tell us that elderly pundit Dr. Jerome Corsi is facing prison time for getting tripped up in a perjury trap by grand inquisitor Robert Mueller. Corsi’s actions, whatever the specifics, did not produce a victim.

Regardless of what you think of his politics, Corsi is facing the prospect of being locked up due to the game of DC blood sport. Seemingly half the country is foaming at the mouth at the sight of a political writer being caged because he favored their rivals’ presidential pick.

The question is, does anyone want to live in a society where its law and liberty is decided by these violent bouts of scapegoat ping pong? Where do we get off this ride?

To exit the vehicle safely, we must know how we got in it, why it is breaking down, and why it is making us sick on its way out of commission.

The enigmatic Jewish prophet Habakkuk once wrote, “Woe to him who builds a city with bloodshed and establishes a town by injustice!”

He wrote it at a time in which the world was filled with societies founded and mediated by controlled acts of bloodshed. Today, we call it ritual human sacrifice and tribal war campaigns for glory.

As sophisticated moderns, we’re embarrassed to address the seeming fluke of sacrifice so ubiquitous to human history, so we awkwardly shuffle it off to the corners of our museums. At best, the fashionable answer is that sacrifice was a quirk of religion or agriculture or proto-patriarchy or some other such cultural institution that soiled our primal nobility.

In reality, sacrifice was a safety valve ancient communities used to channel pent up resentment, fear, and conflict into misfit human vessels of destruction. These scapegoats were marked out from the masses by some arbitrary difference that made them unbearably peculiar to suspicious crowds looking to avert famine, disease, or other harbingers of social in-fighting and disorder.

We think we have educated ourselves out of human sacrifice, but this is a convenient myth we tell ourselves to justify its continual residue in our daily lives. A culture that sends state agents to lock up a woman selling unlicensed tamales or a political dissident or an addict or an Amish herbal salve seller is still very much enthralled by the one-for-all logic underlying our generative sacrificial origins.

Today, we hide our consent for coercion against misfits by telling ourselves it is for the protection of victims and children. As if, for example, another Amish farmer thrown into jail would cause the nation to perish if he was left alone to sell his raw milk.

Beyond domestic sacrificial violence in the name of victims, it is difficult to find a single country in existence today that did not have its founding determined by self-justifying war. As another remnant of sacred ritual, war has been a socially binding agent for societies: a means of uniting restless neighbors in righteous self-sacrifice of life and wealth for the defeat of a less-than-human foreign foe.

Yet recent years have shown that as the public is more frequently exposed to the images of constant intervention in countries like Iraq, Yemen, Libya, and Syria. Whatever unifying high war once held is rapidly dissipating.

Our increasing sensitivity to the plight of others make governance models built on the initiation of physical violence against nonviolent people increasingly ineffective. No wonder criminal justice reform and ending wars are now the few areas of overwhelming political unity.

Yet political systems, always in a lag from cultural trajectories are dramatically slow to decisively satisfy such popular demands.

A command-and-control economy where medical innovation and scientific reform are bugs to be blocked by bureaucracies simply has too much inertia built on the foundation of sacrificial wars and regulations to change its ways any time soon.

That’s why Joe Quirk and the Seasteading project are such a fascinating case to consider. Quirk’s planned seasteads – floating platform-based ocean communities – could benefit the customers of monopoly governments by modeling nonviolent, voluntary community making. As sacrificial forms of governance continue to leave their citizens in disunity and resentment, we have a real chance to see the first sovereign societies develop free from bloodshed.

An ocean-platform community voluntarily funded and organized, if successful, is a monumental event in human anthropology.

Just having a place where problem solvers and innovators can develop potential breakthroughs in science, medicine, and innovation, free from deeply captured regulatory apparatuses could be a tremendous leap forward for mankind. And if these societies can maintain a thriving, non-state-managed existence, the rest of the world’s governments will be on notice to wean themselves from sacrificial violence, rather than perish from increased social unrest and decline.

Competition may be a sin to John D. Rockefeller. But when it comes to bloated bureaucracies buoyed by outdated ways of treating human beings, it looks like a big beautiful blue ocean to me.