How America Grew Bored with Love 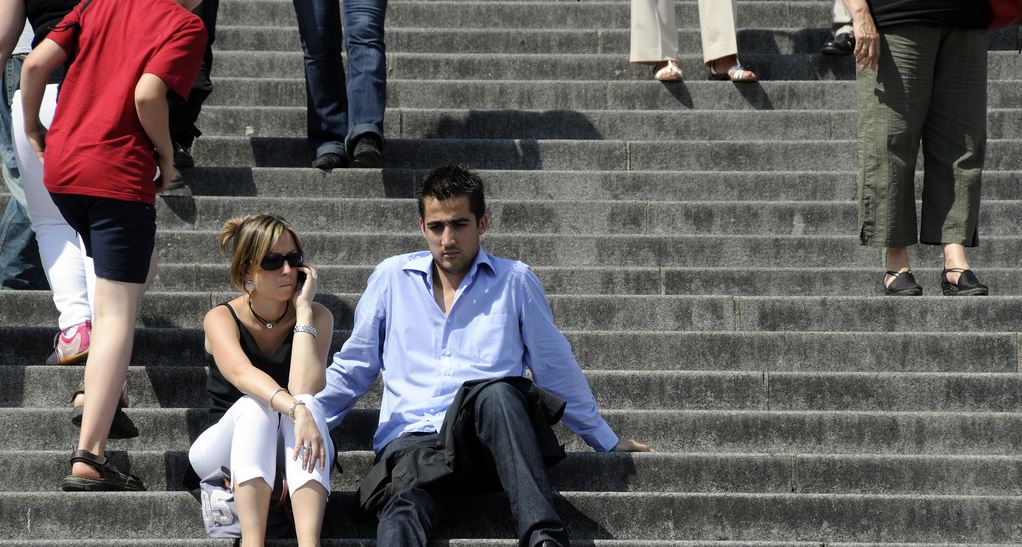 “Where is the love?” Donny Hathaway and Roberta Flack sang in an unforgettable hit from 1972. Their breakup ballad could now double as an odd anthem for American culture. Its people, art, and entertainment have rejected romance and sexual intimacy as subjects worthy of celebration and investment. In a sad commentary on an increasingly dysfunctional society, love has all but vanished from pop culture.

In 2014, the Journal of Advertising Research published a study documenting an odd decline in references to love throughout popular music. The word had fallen below phrases such as “good time” and epithets such as the N-word on the list of most commonly sung terms in the chart topping hits of the 2000s.

Music critic John Blake took notice seven years ago of how R&B—a genre that once gave the world Al Green and Aretha Franklin—no longer produced or broadcasted songs of romantic passion. The only four letter word impermissible in hip-hop is “love.” Sexuality is primarily a means of misogynistic conquest; committed bonds of affection are not worthy of pursuit.

Film is equally sterile and chaste. Leading men are more likely to wear face paint and capes than tuxedos or cowboy hats, and starlets jockey for “transgressive” roles as tattooed, gun wielding action heroes, rather than brides-to-be or even femme fatales.

Esquire recently reported that “moviegoers are tired of romance on the silver screen.” A writer for The Washington Post declares that “the rom-com is dead. Good.” Both articles attribute the lack of interest in love among the moviegoing public to shifting social mores that now render the “clichés” of the boy-meets-girl movie “offensive.” It has become the stuff of cliché to read “cutting edge” cultural critics deconstruct popular love stories like Pretty Woman and Say Anything, reimagining them as predatory tales of women surrendering to sexual harassment. Never mind that the largest audiences for these films were always and will likely remain women.

Any heterosexual male attempt at seduction is now, in the words of one writer, a perpetuation of “society’s unprogressive cultural expectations regarding gender roles.” Even nonsexual expressions of genuine feeling arouse anger. Lindy West, a New York Times columnist, summons all of her brilliance to call a British character in the film Love, Actually, who learns Portuguese and flies to Portugal to propose to a woman who spent a summer cleaning the house where he was staying, “creepy.” The woman accepts the proposal in English, showing that she too took language lessons because she also fell in love with him.

Is it any surprise, then, that in literature, as an essayist for Quillete recently asserted, “men cannot write about sex anymore”?

The Esquire report identifies a generational transformation, citing how Millennials are the least likely to listen to love songs or watch love stories on the screen. Indifference to romance explains why young Americans are dating less, having sex less, and delaying marriage longer than any previous generation.

As an instructor at a small university, I am continually shocked by the languid sterility of the contemporary college classroom. Most of the young men and women wear sweat pants and moccasins, rarely speak, and spend more time looking at their phones than each other.

My observations might seem contradictory, but they actually complement studies of how college students who are sexually active are increasingly dissatisfied, claiming that they do not enjoy sex because it is the province of an increasingly vulgar and transactional “hookup culture.” Rather than a stage in courtship, sex is now something that transpires between two drunken strangers at the end of a long party.

Sociologist Lisa Wade spent five years studying “hookup culture,” and her conclusions are as weird as they are disturbing.

“There’s a dichotomy between meaningless and meaningful sex, and students have to go out of their way to ‘perform meaninglessness,’” according to an NPR summary of Wade’s findings. “They have to prove that they’re not emotionally attached to their sex partners, and in fact that they care less than the other person.”

An airport kiss between two reunited lovers, or the cries of passion from Marvin Gaye or Etta James, must seem like the unintelligible language of aliens to a generation who, according to Wade, “only have sex with partners they’re not interested in” because they consider genuine feeling the most obscene offense against their idea of “cool.”

Eventually, America may begin to resemble Japan, where one third of young people enter their 30s without any sexual experience.

Psychologists and other theorists blame many things for the American withdrawal from sex and love: the suffocating influence of the smartphone, emotional immaturity and fragility, and fixation on career to the extent that everything else is an irksome distraction. But all of those culprits, while relevant, seem symptomatic of a more radical problem. Perhaps America is a culture ill equipped for love.

Erich Fromm, a Jewish psychologist and philosopher who moved from Germany to New York to escape Nazi persecution, wrote in his brilliant and forever salient book The Art of Loving that love, like any art—engineering, painting, playing an instrument—requires knowledge and effort.

“Our whole culture,” Fromm explained, “is based on an appetite for buying.” As a result, most people think of love only as an acquisition—how can they be loved—rather than learning how to love another. Falling in love is involuntary, but to protect and preserve a more mature and long-term love, the lover must have the discipline, maturity, and faith to “stand in love.”

Writing in 1956, Fromm eerily predicted the “disintegration of love in Western Culture”: “If love is the capacity of the mature, productive character, it follows that the capacity to love in an individual living in any given culture depends on the influence this culture has on the character of the average person.”

The West, and especially its cultural leader the United States, was becoming an “alienated culture of success” in which “life has no goal except the one to move, no principle except the one of fair exchange, no satisfaction expect the one to consume.”

Fromm’s four factors essential for the cultivation and maintenance of love—discipline, concentration, patience, and supreme concern—suffer assault in such a culture. Love is also “dependent on the relative absence of narcissism,” and therefore “requires the development of humility, objectivity, and reason.”

Where exactly in America do children and adolescents witness examples of patience, humility, and the rejection of narcissism? When will they observe a celebration of those qualities, considering that the dominant culture not only denies Fromm’s virtues, but reward egoism, selfishness, and crudity of expression and attitude?

Stevie Wonder sang in what is now a terribly unfashionable song, “Love’s in Need of Love Today,” that Americans might not have much love for love, and might have lost their desire to watch or listen to depictions of love, because love is subversive to its empire of ego.

Not only does it demand vulnerability and risk, it also, as Thomas Aquinas wrote, is to “will the good of the other.” That much is true in authentic romantic love, brotherly love, paternal love, and neighborly love.

In a culture that runs on the fuel of instant gratification, love—and even mutually respectful and pleasurable sexuality—can look like too much effort. The phrase “hookup” is indicative of people who believe that romance should function like an electronic device—plug it into a power source and press the “on button.”

Love and sexuality are the most exhilarating elements of life. But Fromm writes that to truly experience and exercise love, one must “begin by practicing discipline, concentration and patience throughout every phase of life.”

No wonder so many Americans find love boring.