Everyone interested in classical liberalism is familiar with the left-wing narrative that free markets undermine democracy and make the poor poorer. Those who perpetuate these fallacies often describe free market advocates as defenders of the greedy rich while painting socialists as heroes for the common good who bravely dare to challenge the interests of big corporations and protect the impoverished. That is a nice story. A dangerously inaccurate one. One that can be easily undone by reading facts instead of fiction.

Examine how economic freedom affects the income of the poor. According to the 2018 Economic Freedom of the World Report by the Fraser Institute, the income share earned by the poorest 10 percent of the population is mostly unaffected by the degree of economic freedom worldwide. However, the actual income earned by the poorest 10 percent in the most economically free countries is an astonishing eight times greater compared to the income earned by those living in the least economically free countries. What this means is that in countries with lower taxes, fewer regulations, and a strong rule of law, the poor are actually much wealthier. 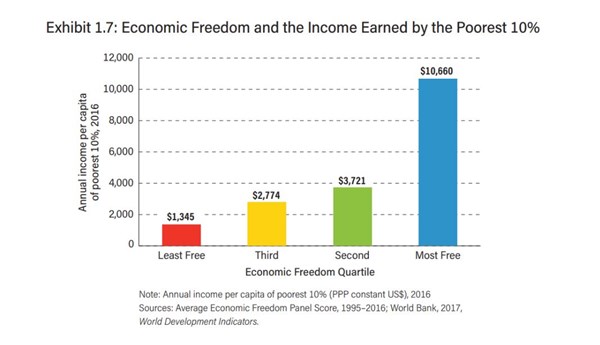 You can almost hear the objection by those well-meaning collectivists: “Yes, but neoliberalism will make democracy collapse.” Well, that’s a funny thing to say when you’re defending the likes of Nicolas Maduro while wearing Che Guevara t-shirts. Again, let’s turn to the data. The Democracy Index is an annual report by the Economist Intelligence Unit that ranks 167 countries according to their commitment to democratic values such as electoral process, pluralism, civil liberties, the functioning of government, political participation, and political culture.

There cannot be political freedom without economic freedom. Leon Trotsky wrote in The Revolution Betrayed that “in a country where the sole employer is the state, opposition means death by slow starvation. The old principle, who does not work shall not eat, has been replaced by a new one: who does not obey shall not eat.”

Out of those 167 countries, only 19 countries are classified as “full democracies,” most of which are found among the top 30 countries in the Economic Freedom of the World Report (with the exception of Sweden and Iceland, which rank 43th and 59th respectively and are both still market-oriented economies with strong rule of law). This correlation works both ways: Most authoritarian countries (with the exception of Qatar and the United Arab Emirates) are also economically unfree, belonging either in the third or fourth economic freedom quartile. So, sorry friends of the left: greater economic freedom is empirically associated with more political rights and civil liberties, and vice versa.

Why? Milton Friedman offers an explanation in his 1962 book Capitalism and Freedom: “In order for men to advocate anything, they must in the first place be able to earn a living. This already raises a problem in a socialist society since all jobs are under the direct control of political authorities.”

There cannot be political freedom without economic freedom. This argument is not controversial, even on the left. Leon Trotsky wrote in The Revolution Betrayed that “in a country where the sole employer is the state, opposition means death by slow starvation. The old principle, who does not work shall not eat, has been replaced by a new one: who does not obey shall not eat.”

Socialists are wrong. Their narrative is wrong. Reality is much different. Not only do free markets make people wealthier, but they also lead to many more political rights and civil liberties. The burden of proof is now on the other side—those who want to restrict liberty and resort to violence—to prove their righteousness. Those who wish to make their own economic decisions on how to spend their salary should not have to first beg permission from the government. Instead of facts, all we see from collectivists are lies and immoral correlations between the free market and fascists regimes based on unsubstantiated feelings.

We can prove why liberty and non-violence are vital. Can they prove the opposite?