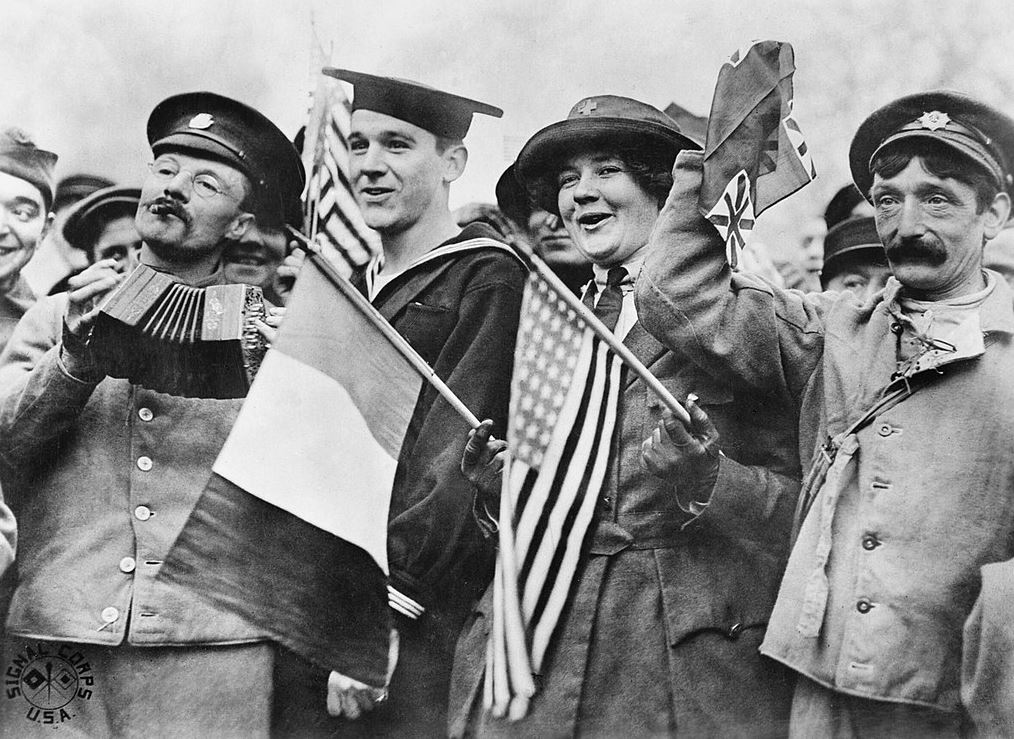 As we approach the centenary of Armistice Day, 1918, let’s spend a few minutes with a British writer who supported his country’s war against Germany and worried about the peace that resulted from it. That writer would be G. K. Chesterton, who died in 1936, just before World War II, or the war that he feared would result from the Versailles Treaty negotiated after the first war.

Despite his inability to know the future, Chesterton did have some prescient things to say about Europe’s immediate future, as well as England’s relationship to Europe. Some of those things were captured in a posthumously published collection of essays titled The End of the Armistice.

While the title was not chosen by a deceased G. K. Chesterton, it did make a point that he had made frequently between the end of the Great War and his death. That point was that the Armistice of November 11, 1918, and the resulting Treaty of Versailles were bound to lead to another great war. Why? Because the original Great War, which may or may not have been caused by Germany, had failed to solve what Chesterton regarded as the problem of Germany. That would be a powerful and aggressive Germany located in the heart of Europe.

True, Germany had been defeated in that war. It was true as well that the Versailles Treaty reflected that defeat. At the same time, that treaty was a compromise peace, a compromise between the British-French desire to punish Germany and the American dream of a non-punitive Wilsonian peace. As a result, the Versailles Treaty weakened Germany without destroying it. Germany was left angry and resentful, but mostly intact and, therefore, able to recover and seek revenge before too much time passed. In sum, the way had been prepared for a Hitler.

Fast Forward to 1933, to November 11, 1933, to be exact. On the fifteenth anniversary of the original Armistice Day, the Illustrated London News published a Chesterton essay that has subsequently been titled “Europe on the Brink.”

Adolf Hitler had come to power in Germany early in 1933. But Chesterton directed his Armistice Day, 1933 thoughts to Germany in general, rather than to Hitler in particular, and he began his thoughts with a plea for thinking before acting. After all, he thought that battles were not won by generals who declared that the “time has come for action,” but by generals who first thought clearly and logically about the “wisest way to act.”

For Chesterton, what was wrong with Germany could be captured in a single sentence: “Germans can be quite hysterical.” Lest you think Chesterton was content to deal in negative stereotypes about Germany he politely conceded that Germans can be “quite genial and hospitable.” Nonetheless, they have a tendency to indulge in a “deleterious, even dangerous sentimentalism.”

Why, he wondered? Perhaps their hysteria had something to do with their defeat in 1918. Perhaps it had settled into a “permanent sulk,” albeit one that “intermittently breaks out in bragging.” Perhaps, he suggested, German sentimentalism is traceable to the fact that the greatest German art, music, is the one great art that appeals more to the emotions than to reason.

But Chesterton was not finished laying the groundwork for Hitler. Nor was he about to conclude that Germans fail completely when it comes to thinking. They certainly thought long and hard about their defeat in the Great War. And thinking about it is right where the “still somewhat secret German hysteria” came into play. Germans simply could not bear to call “a defeat a defeat.” Instead, Germans preferred to see themselves as “ever-victorious.” As such, they were the “emperors of their own imagination,” who “tower(ed) triumphantly over all the inconvenient facts of history,” the most inconvenient of which was their defeat in the Great War. And still there is no mention of Hitler, and there won’t be.

G. K. Chesterton was anything but a futurist. But perhaps he did have a few predictive powers. After all, his thinking about Germany did lead him to speculate that the European power which worried him most would initiate a second great war with an attack on Poland.

Today, German policies would concern Chesterton for very different reasons. But that’s another story for another day. For the time being, let’s use a bit of Veteran’s Day to ponder Armistice Day, 1918 and Chesterton’s thoughts about it, including his prediction about the end of that armistice and the onset of another world war. And an amazing prediction it was, considering that he made it before he died in 1936!