Meeting A Lost Soul In The Skies 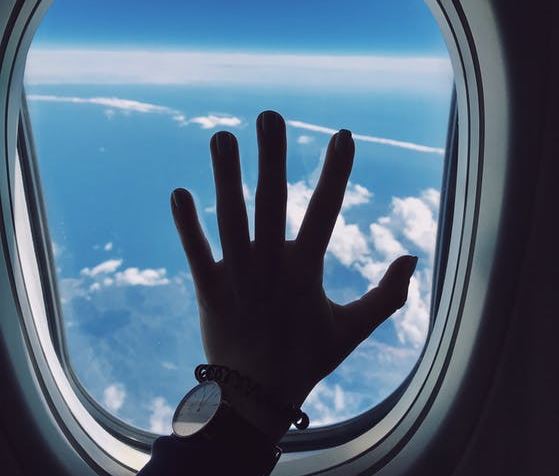 On airplanes my druthers is to mind my own business. I don’t want to be rude, but I much prefer reading to chatting. And that’s precisely what I did for almost the entirety of a recent flight. Nothing out of the ordinary here. It’s my usual pattern. And it generally works, especially if one avoids small talk right from the start. My motto is “Settle in, buckle up, and open a book.” OK, I generally do exchange pleasantries. But if you get beyond the flight, the where from and where to stuff, and the weather, you could be heading into all sorts of strange territory. Then, before you know it, you’re landing.

On this particular flight all went according to plan until twenty minutes or so before touchdown. At that point my young seat mate interrupted my reading to ask a small favor. Could I help her with her connecting flight? Of course, I replied. (I’m not that unsociable.)

Well, as might be expected, this brief exchange led to a bit more conversation. I soon learned that she had never flown before. And then I learned a little bit more than I wanted to know.

Having noticed that she had been working on a school assignment, I asked her if she was in college. She giggled slightly at what I soon learned was my partial error. No, she was not a college student. She was still in high school and heading home to see her family. And then without benefit of another question from me she went on to tell me that she had left her family in Indiana to live with her boyfriend in New Hampshire!

In part, I was too stunned to reply. But I was also too cowardly. Cowardly? Yes, cowardly. To be sure, I quickly rifled through all of the usual excuses. It’s none of my business, I told myself. And it wasn’t. Besides, she’s a perfect stranger. Which she was. And of course, there was too little time. Which was—and wasn’t—true.

So there you have it. A sad commentary, twice over, on the state of affairs in 21st-century America. A teen-aged high school-going girl can think nothing of moving in with her boyfriend half way across the country. And then that same teen can think nothing of telling a perfect stranger of this arrangement.

Did her parents know, I wondered. Did they approve? If not, were they speaking to her? If so, were they helping her? And if so, how—and why? Was she going home to visit or to stay?

Lest you think I had been stunned into complete silence, I did my duty as a fellow passenger (even if I didn’t do my duty as a fellow human being and surrogate in-flight parent). I escorted her to the right monitor, pointed her in the right direction, sent her on her way, and wished her well. (Yes, I am that sociable—and that cowardly).

As to helping her find her way in other right directions? On that score I failed completely. All I could do was trudge off to my own connecting flight, that brief human connection gone forever.

And all I can do now is wonder what will happen to that young girl with her high-school math book and her live-in boyfriend. And when I don’t find myself wondering about her, I wonder about the future of a country that produces lost souls that don’t even know that they are lost.

How could she be lost? After all, she was diligently doing her homework. She was traveling to see her family (while giving no indication that she was returning to live with them). And she thinks she has found at least one someone whom has some reason to think cares for her.

I have to assume that she found her way… to her immediate destination, that is. But did she find her way home? And where might that home be? Any such thoughts were probably not on her mind as she glanced at the monitor.

But many thoughts were on my mind that day. There once was a time when virtually every young person knew where home was. That’s much less the case today. Of course, most teens have not left home to live with boyfriends or girlfriends. And most teens do know where home is—even as they go about the inevitable, and sometimes inevitably messy, business of making that difficult transition to adulthood before establishing a home of one’s own. But what about this not necessarily inevitable (but increasingly common) business of pretending to be an adult while still a teen?

She spoke matter-of-factly and without embarrassment. And yet there was little doubt in my mind that she was setting herself up for heartache and failure. But hers is not the only failure. The real adults in her life have failed her as well. And that includes the one who happened to flit in and out of her life ever so briefly as she was trying to find her way home.