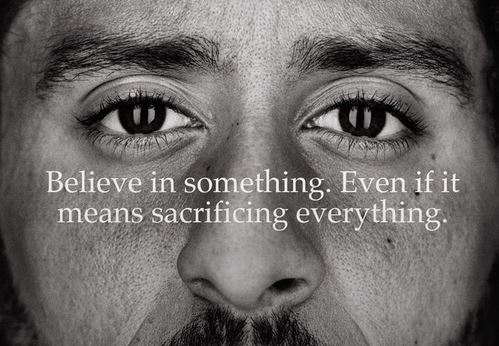 One of the world’s largest sports apparel companies is now embracing the man who started it all, and fans aren’t happy about it.

Nike is jumping in to champion Colin Kaepernick, the man who launched the now-frequent national anthem protests, and is making him the face of its “Just Do It” ad campaign.

Nike’s ad says, “Believe in something, even if it means sacrificing everything.”

Last year he sued the league for colluding against him, though he hardly impressed in his final season in the NFL. Kaepernick played poorly in 2016 before getting benched after putting up a 1-11 record for the San Francisco 49ers. He was cut by the team and hasn’t played in the NFL since.

Kaepernick received $39.4 million for three years of a seven-year contract with the 49ers. His new contract with Nike may be worth millions, according to Newsweek, though the official numbers have not been disclosed and there is dispute over the terms of the deal.

The former 49er quarterback also received an interesting endorsement after the ad was released.

Kaepernick hasn’t shied away from showing support for brutal, anti-American leaders—such as when he wore a shirt celebrating the late Cuban dictator Fidel Castro, a communist whose racist regime crushes any dissent.

Now, after the Nike endorsement, a former foreign leader with anti-American views has embraced Kaepernick.

Former Iranian President Mahmoud Ahmadinejad, who has routinely called for the destruction of Israel, chimed in to support the unemployed quarterback, demanding that an NFL team sign him.

Nike’s ad is a peculiar move given that Kaepernick is such a divisive figure, and many of Nike’s customers have already voiced disapproval. Some upset customers launched a boycott campaign against the apparel company, and posted numerous pictures on social media burning or otherwise destroying Nike products.

Others mocked Nike for turning Kaepernick into an aggrieved hero.

Nike stocks also immediately dipped after the release of the first Kaepernick ad.

This is not to say that Nike won’t make more money at the end of the day. Nike is clearly banking on the belief that the reward will be worth the controversy.

Nevertheless, this discontent mirrors the broader frustration of NFL viewers nationwide in response to the kneeling controversy, which led to a significant decline in interest in America’s most popular professional sports league.

The NFL once served as a uniting source passion for Americans. Yet in just a few years, that has changed. The league’s ratings have plummeted and there is no end in sight to the NFL’s popularity freefall.

Last season, the NFL became America’s most disliked team sport. A poll from November found that 38 percent of Americans were “unfavorable” toward the the league, a number almost twice as high as the next most hated sport.

There are certainly multiple factors contributing to this decline—cable cord cutting, poor play, poor officiating, changing taste among American viewers—but the elephant in the room is the noxious, hyper-politicized environment that now plagues the game, all stemming from the highly unpopular national anthem protests.

This seems to be, according to some polls, the biggest factor in declining interest in the sport.

Despite the NFL’s attempt to clamp down on protests before the 2018 season, it appears that the controversy will continue. Players say they will keep protesting and Nike has now reopened the wound—perhaps in part driven by animosity toward President Donald Trump, who has routinely attacked the kneeling players and called for them to be pulled from the field.

What’s clear is that Trump’s critique played into anger and frustration that these protests have caused. It’s part of a much larger debate over patriotism and American identity that in part led to his election in 2016.

Many who defend the anthem kneeling say it is not about the anthem or the flag at all. The head of the NFL Players Association, DeMaurice Smith, said in an October 2017 statement that “No player is disrespecting our country or our flag.”

But Kaepernick made it quite clear at the time that his protest was, in fact, about his country and his flag.

“I am not going to stand up to show pride in a flag for a country that oppresses black people and people of color,” Kaepernick said in 2016. “To me, this is bigger than football and it would be selfish on my part to look the other way. There are bodies in the street and people getting paid leave and getting away with murder.”

This strikes at the heart of the division over these protests.

While the national media—and now corporate America—have championed Kaepernick’s cause as a noble one for social justice, others simply see it as a disrespectful broadside on America in general, a rebuke of the flag and our national traditions, which serve as some of the few uniting elements of civil society that keep the country together.

Instead of seeing it as a noble struggle for civil rights, they see it as merely the latest attack on the best things about the United States.

As with the backlash over the soon-to-be-released movie about Neil Armstrong and the first moon landing, which won’t show the unveiling of the American flag on the moon, the Nike boycotts demonstrate that there is widespread discontent over the fact that symbols of patriotism are no longer being celebrated or are being outright purged from public life.

Americans are desperately seeking leaders and public advocates who are unabashedly pro-American and who aren’t afraid to lambast America’s elite institutions, like Hollywood, the media, the NFL, and even corporate America, which seemingly no longer care to be pro-American—either for reason of creed or greed.

Perhaps this explains why Trump remains so popular with large swaths of the American people.