What Russia’s Real-Life ‘Hooligan’ Fight Clubs Can Teach Us About Reality, Violence, and the Human Condition 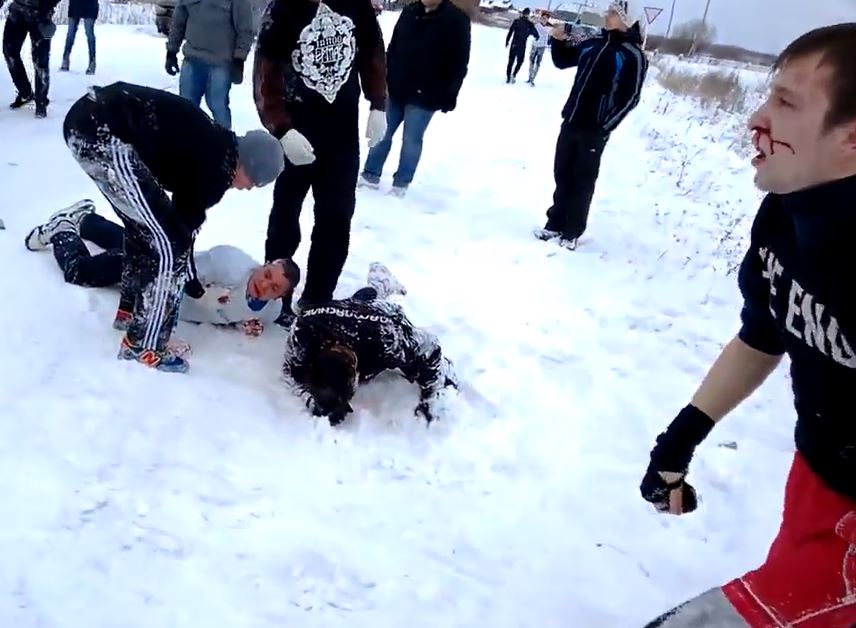 In the lead up to the 2018 World Cup in Russia, many sports journalists have been writing about the state of Russian sports and culture. This continues a theme from the Winter Olympics in February where Russian contestants were banned because of alleged state-funded doping. But as fans from around the world arrive in Russia to enjoy the beautiful game, ESPN’s journalists have investigated the rise and rage of Russian hooligans.

Hooligans in Russia love to fight. They do so in the woods away from prying eyes and in groups as small as 5 or as large as 100. It’s intense, barehanded, mob-style fighting.

In a feature on ESPN, Sam Borden interviews three Russian hooligans of different stripes. The first is 18, looks younger, and has interests in 20th century literature. The second is older, tougher, and much more experienced. The third Russian interviewed for this story seems more like a wanna-be hooligan than the real deal. He looks and talks big but his stories are vague and unconvincing. These three Russians seem to sum up the different layers of the phenomenon in Russia.

But one question demands an answer: why would bare-knuckle, mob-style, illegal fighting be so popular for anyone? In answering, the Russian hooligans say that it is about mental and physical strength. The 18-year-old, Vova, puts it this way: “In a fight, everything is different,” he says. “It requires anger, some kind of rage or something like that.” … The woods, he says, is where he lets the rage out, where he immerses himself in something that “strengthens the mind.”

For this fighter, letting out this rage enables him to be a better man. A legendary Russian hooligan named Arnie puts it more directly: “The biggest attraction is clearly that there is something addictive about a man overcoming and then exploiting the fear of being hurt. “In any culture,” Arnie says in a tone one might use with a toddler, “fighting among the species just makes the species stronger.”

As a famous philosopher once observed, “Was mich nicht umbringt macht mich stärker” (“what does not kill me makes me stronger”).

Whether or not this is actually true, it’s an idea that resonates with many around the world. David Fincher, for example, said this about the appeal of his movie Fight Club: “When somebody hits you in the mouth and you get that first rinse of salty something under your tongue, and you spit into your hand to see what it is, you are truly alive in the moment.”

David Fincher isn’t the same sort of person as Arnie or any of the Russian hooligans interviewed by ESPN. But the tone is much the same. And the movie Fight Club—one of the best movies of 90s, according to Rolling Stone reader’s poll—engages with the same problems in a different cultural moment. Perhaps Russia’s situation isn’t so unique? Maybe there is more to hooligans than bloody knuckles and a Russian form of masculinity?

But all of this should be put in a much larger context. The question of hooliganism should really be put next to that of mob violence all over the world. The lens of French sociologist René Girard can help put this in perspective. Three of his ideas can help here:

1. Friendship and rivalry are fundamentally the same

3. The solution is violence, but external violence

The violence in and around sports comes from that love-hate relationship which fan groups have for each other. Hooligans require other hooligans for identity and for that rage. If no other fans existed, all passion would be unsustainable. And rivalry of fans sometimes, without other healthy societal institutions, becomes more and more absorbing and obsessing leading to these intense allegiances and fan battles.

But even in the healthiest society, sports will never be a clean, sterile place of competition. Violence will be vented somewhere; and without the gospel, the phenomenon of Russian hooliganism will not be the last.

When the blind bard invoked the Muse’s help to sing of the rage of Achilles in the Iliad, he began one of the most famous stories in Western history. It is also one of the most unblinkingly violent. America especially needs to come to terms with the powerful wellsprings of violence that lurk in nearly every institution and community. Perhaps our history with mob violence needs to be better understood?