C.S. Lewis once observed that we don’t need more Christian books, we need more Christian writers. In other words, people of faith who have the gift should write not just worthy books on prayer. They should write novels and children’s stories and cookbooks and travel books, fantasy, fiction, poetry, and drama. His point was that for Christianity to be real it has to be diffused into the culture in a realistic and practical way. If you like, it needs to be the heart of the culture, not just the head.

I have four worthy books to review that attempt just that. They are by Christian authors, but they are not Christian books. Instead, all four authors, from different perspectives, are attempting contemporary fiction with a Christian heart. This is a risky business, and I’m not sure they succeed completely. This is why reading all four books has been an invigorating challenge.

Dr. Taylor Marshall is one of those amazing individuals who accomplish an enormous amount, like the man on the flying trapeze, with the greatest of ease. A convert from the Episcopal priesthood, he is the founder of the New Saint Thomas Institute—a hugely successful online Catholic study center. He maintains a vitally interesting blog, is the author of three excellent books on St. Paul and the Jewish background of the early church. He is the founder of Troops of St. George—a robust Catholic alternative to the Boy Scouts—and is the author of a trilogy of novels about St George and the father of eight children. 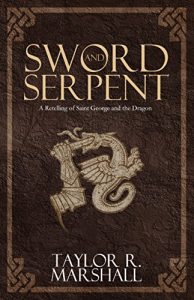 Dr. Marshall’s first novel, Sword and Serpent is a re-telling of the story of St. George and the Dragon. Set during the persecution of Diocletian, the hero sets out on a quest of survival and battle, meeting all the great heroes of the faith from the third century on the way. The second book, The Tenth Region of the Night sees Jurian the hero caught up in imperial intrigue that leads to the Colosseum, while the third book of the trilogy, Storm of Fire and Blood takes the hero to Brittania where he becomes involved with the mysterious sword embedded in a stone and all that goes with it.

I hesitated before reading the first book as I am a harsh critic of fiction. A book needs to grab and hold my attention, and strained, bulky descriptions, unbelievable dialogue, shallow characters, and a plodding plot lose me quickly. Dr. Marshall did not disappoint. I was surprised to be swept up into his story and intrigued at his ingenious imagination. Not only are his descriptions of place and character crisp and vivid, but he also writes with passion, communicating real feeling in his storytelling.

This trilogy of historical novels provides a smart interface for the Catholic writer. The historical setting distances the audience from overt Christian themes without seeming to do so, while the hero’s conflicts remain human and therefore universal—applying in every time and place. The Christianity is in the setting, and context and is therefore credible and absorbing.

Dr. Marshall’s fiction provides a good read for young adults and upwards. My only criticism is that he could have used a sharper editor. In the second book the story line bogs down somewhat, and more consultation on the plot might have tightened up the tale. Apart from that, Dr. Marshall’s accomplishment is astonishing. That he has produced novels of such quality and interest—combining extensive historical research with brilliant characterization, sharp plotting and a sparkling imagination—is excellent. That he did this while being a father of a large family, running a top-line apostolate and ministering to thousands online is truly a work of magnitude.

Jennifer the Damned and Oregon Confetti are two novels published by the new start-up upstart, Wiseblood Books. With some daring choices, Wiseblood is looking at the whirlpool of faith and culture and jumping in the deep end feet first. For that they are to be congratulated. 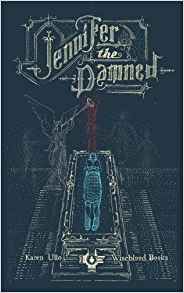 Karen Ullo’s Jennifer the Damned is a surprising entry into the teen vampire genre. Sixteen-year-old Jennifer Carshaw, adopted by nuns, suddenly blossoms into the vampire she was always destined to be, and as her taste for blood bursts forth, her horrible life explodes. Her immorality embraces her immortality, and the ensuing danse macabre is strangely terrifying and moving. As the novel unfolds, we are caught up in teen angst on a cosmic level that echoes Stoker’s classic Dracula and nods to the whole vampy, vampiric tradition.

Ms. Ullo writes with grotesque humor and gritty horror, weaving faith into the story at a complex and realistic level. While the first half of the book was riveting, I’m afraid I couldn’t go the full length. Maybe as a man in my sixties I simply couldn’t suspend my disbelief enough or care enough about the teen vampire. The entertainment and novelty of the book went stale for me, and I think the novel would have been stronger if it had been shorter, or perhaps broken down into a series of shorter tales.

I think a series of Jennifer the Damned books with unashamedly lurid covers would have been more successful than this one full-length novel. An eye to a teen market with shorter books for shorter attention spans may have been a better prospect.

Nevertheless, Jennifer the Damned is well-written and absorbing, and Ms. Ullo and Wiseblood should be congratulated for taking the risk. 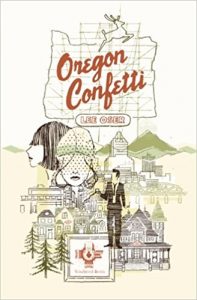 Oregon Confetti by Lee Oser tells the tale of Portland art merchant Devin Adams—a laid-back wheeler-dealer who is not shy of the odd shady scheme. When his friend John Sun knocks on his door to dump a mysterious infant, Devin is drawn into a high drama of misfits, criminals, Chinese gangsters, and lusty babes.

I enjoyed Oregon Confetti but got lost along the way. The characters were funny, memorable, and roguish, and the plot line was fast-paced and fun. The reader tumbles along from one confusing and mixed-up episode to another, and while this is the character and charm of the book, it is also its fault. I wasn’t quite sure what the hero wanted to achieve and where he was going. Nevertheless, it eventually comes clear that this is not only about Devin’s outer quest but also his inner questions.

While I enjoyed it, I was unsure about Oregon Confetti. Somehow the main character, with his easy-going promiscuity and foul language seemed strained—almost as if the author was trying too hard to be cool. Also, moving in a highbrow world of modern art, the environment and context of the story was not one in which I was at home.

For all its suave, street-smart savvy, Oregon Confetti felt contrived and therefore made me feel like I should be reading it on an electronic gadget while sipping a craft beer in a trendy brewery. But that might just be me being an old coot. Maybe millennials will love it.

Finally, Joshua Hren’s collection of short stories has hit my desk. This Our Exile is published by Angelico Press, and the connection is that Prof. Hren is the Editor-in-Chief of Wiseblood Books, publisher of Dr. Oser and Ms. Ullo. I interviewed Prof. Hren for The Imaginative Conservative a few weeks ago. As an English professor, Joshua Hren is definitely interested in publishing literature and not simply potboiler fiction and penny dreadfuls.

This is clear from his own collection of stories. Prof. Hren writes about the mundane suffering of ordinary people today: a serial killer who lives next door; a meth-addicted couple whose child dies of neglect; a suicide; a traumatized vet; a couple of terrorists; and more. Prof. Hren dives deep into the darkness and writes intensely introspective prose as his characters explore their predicaments and ponder their problems.

The stories in This Our Exile are written from a foundation of faith, but they are not easy fables or pleasing allegories. The answers are as elusive for Prof. Hren’s characters as they are for modern people in search of their souls. The answer, in this collection of dense but beautiful stories, is often locked into the touching fragility of the prose. Prof. Hren’s writing has a poetic lilt, and it is there that one has a glimpse into a sympathetic heart beneath the gut-wrenching situations and gritty characters. There is passion here like the passion of the Christ—no easy answers, except those wrought out of the pain and wrung out of the rags of experience.

Sometimes Prof. Hren’s descriptions were distracting in the overuse of metaphor and simile. It is a hard thing for an author to kill his darlings. At times too, the intensity of his introspection took m 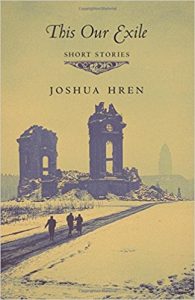 e on a lengthy detour. Concision, brevity, and more self-deprecating humor would have lightened the burden a bit. I’m thinking of the way Walker Percy, Flannery O’Connor, or J.F. Powers could reveal a truth from within a chuckle.

While I enjoyed Prof. Hren’s collection and the novels he has published by Dr. Oser and Ms. Ullo, I was troubled by a problem current in our culture: the increasing divide between fine art and popular art. Last summer I met a graduate student of literature from Oxford and engaged in discussion with the rather languid Englishwoman about literature. She was studying the impact of literature on culture, so I asked if her study included film, television, comic books, and video games. I admit it was a naughty bit of baiting. With a raised eyebrow she dished me a genuine helping of English ice. She was, of course, with a mile-high smile, above all that.

I worry therefore that “literature” has become too much confined to an elite set of academic types who circulate their stories among the hoity toity not the hoi polloi. Taylor Marshall’s books are accessible to mainstream readers, Ms. Ullo’s teen vampire tale was a good effort, and Dr. Oser, as I mentioned, tried perhaps too hard to connect. For all their technical excellence and depth of thought, Dr. Oser and Prof. Hren may be above most readers, and will appeal more to those Flannery O’Connor called “them innerleckshuls.”

While we certainly need literature for the literati, we also need fiction for folks. I’m in favor of turning again and learning from C.S. Lewis, who could produce fine literature, but did so while telling a cracking good story for a wide audience. He once told seminarians that if they wanted to preach a good sermon they should take what they had written and “translate” it for their cleaning lady. Now there is a real risk and challenge!