Chilling Sommers: Another Blow to Discourse 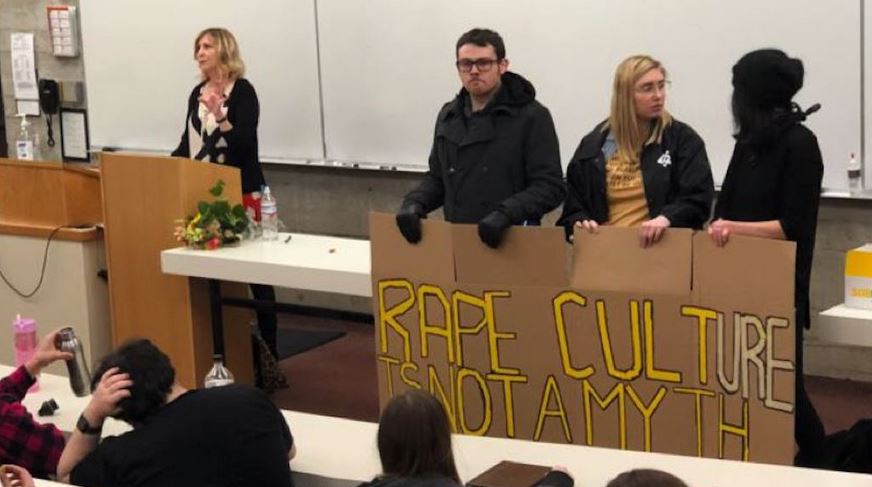 Among contemporary public intellectuals, Christina Hoff Sommers is among the most attacked by our illiberal Left. In the latest episode, student groups at Lewis and Clark Law School this week protested Sommers’ Federalist Society talk. Prior to her talk, these groups released a joint statement titled “Refuse Fascism in All Its Forms,” voicing concern over “a troubling event,” (Sommers’ planned lecture) which is “an act of aggression and violence.” The statement urges the school community to join in, “not to facilitate ‘discourse,’ but in solidarity with the voices that are systematically silenced.”

The video of the protest is, frankly, cringe-worthy and embarrassing. What took center stage was not Sommers but students carrying flaccid cardboard signs accompanied by a woman with the words “Stay Woke” printed on the back of her jacket. She appeared to be the group’s leader since she was the one who read a series of statements, which then proceeded to be repeated by the rest of this group of “enlightened” social justice warriors. Maybe she and her “comrades,” as she called them, should have taken the words “Stay Woke” to heart because they looked rather lethargic and phlegmatic.

Sommers was polite, gave them time to speak, and then called on them to have a debate and to reason with each other. But she was repeatedly rejected and silenced. These supposedly tolerant individuals were not interested in reasoning or having a dialogue. In fact, they obviously lacked the capacity and the requisite intelligence to reason—otherwise they would have found a different way to communicate with Sommers. It is fairly obvious they would fail spectacularly at reasoned argumentation because their statements are not based on reality or facts. No matter how many times they repeat and chant that “microaggressions are real,” the truth is they are not.

As much as Sommers is used to this kind of treatment, it should not be accepted. The protesters caused a disruption in what was supposed to be a lecture followed by a question and answer session. The Woke-Pod People chose an entirely different form of expression, which is incompatible with an intellectual presentation whose purpose is to create a discussion about the issue at hand.

The wimpy and pathetic cry of the protesters claiming oppression is utterly nonsensical because, in reality, they are the ones engaging in totalitarian tactics to suppress voices other than their own. They rely on twisting the language (in this case, “Sommers is a fascist”) to suit their purpose. But what is their purpose? I don’t think they have one, except to agitate, be “brave,” and feel good about themselves for their alleged “bravery.”

At the core of this problem is the underlying structure of higher education today which is based on Marxism. Young minds are brainwashed with cult-like tactics under the guise of tolerance and acceptance. Even though Karl Marx is almost never actually read or addressed in the classroom, his theories  are perpetuated in university and college classrooms in ways that are structurally Marxist. It really doesn’t matter what kind of theories these are. In his essay on the American intellectual scene, “In the Land of Rococo Marxists,” Tom Wolfe observed that theories “vary, but the subtext is always the same: Marxism may be dead, and the proletariat has proved to be hopeless . . . but we can find new proletariats whose ideological benefactors we can be . . . which we can use to express our indignation toward the powers that be and our aloofness to their bourgeois stooges, to keep the flame of skepticism, cynicism, irony, and contempt burning.”

The common man, who is supposed to be at the center of Marxist manifestos, is no longer there because professors and theoreticians are completely disconnected from the concerns of regular, working people. Instead, under the guise of equality and solidarity, academics and the students who have become their sycophants more than their pupils, follow them into a “post-struggle” elitist Marxism. Of course, intellectually and practically, this confused and contradictory amalgam makes no sense. Higher education institutions have become Twilight Zones without metaphysics.

Protests like these have become a habit in American schools, and it’s time to put a stop to this utter idiocy. But what can be done? What should Sommers have done? She was put in an awkward and unenviable position. Her approach to dialogue was admirable but arguing with fools is not a productive task.

Maybe we should take a page from Trump’s book. I recall an experience at a Trump rally in fall 2016. As soon as Trump started to talk, a group of students formed a chain, sat down, and broke out in an anti-fascist rant. In his usual fashion, Trump didn’t waste much time on it. “Here we go, it started already,” he said. “Go home to your mom’s basement,” continued Trump nonchalantly. With a sweeping gesture he said “Get ’em outta here.” Without any violence, police escorted the students out. Unfazed, Trump continued to deliver his speech.

Is this strategy even possible at a university? After all, the students at Lewis and Clark Law School were not the only ones bearing the mark of culpability. The school’s Dean of Diversity (whatever that means) told Sommers to speed up her lecture, effectively siding with the protesting students. Should Sommers have called out the dean publicly? Should she have left?

This will happen again, if not to Sommers then to another non-leftist speaker. We have to begin to ask practical questions and seek practical solutions because, as Trump has repeatedly demonstrated, the rules of the game have changed.