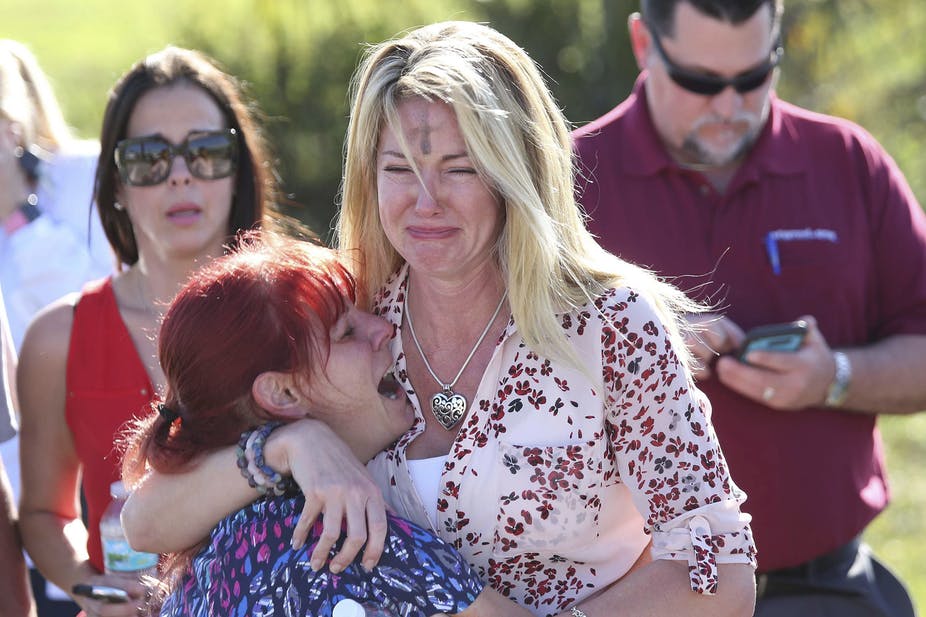 When deadly school shootings like the one that took place on Valentine’s Day in Broward County, Florida occur, often they are followed by calls for more stringent security measures.

For instance, after the Jan. 23 case in which a 15-year-old student allegedly shot and killed two students and wounded 16 others at a small-town high school in Kentucky, some Kentucky lawmakers called for armed teachers and staff.

If anything, the response of the Kentucky lawmakers represents what has been called the “target-hardening” approach to school shootings. This approach attempts to fortify schools against gun violence through increased security measures. These measures may include metal detectors, lock-down policies, “run, hide, fight” training and surveillance cameras.

While some of these measures seem sensible, overall there is little empirical evidence that such security measures decrease the likelihood of school shootings. Surveillance cameras were powerless to stop the carnage in Columbine and school lock-down policies did not save the children at Sandy Hook.

As researchers who have collaboratively written about school shootings, we believe what is missing from the discussion is the idea of an educational response. Current policy responses do not address the fundamental question of why so many mass shootings take place in schools. To answer this question, we need to get to the heart of how students experience school and the meaning that schools have in American life.

An educational response is important because the “target hardening” approach might actually make things worse by changing students’ experience of schools in ways that suggest violence rather than prevent it.

How security measures can backfire

The “target hardening” approach also has the potential to change how teachers, students and administrators see one another. How teachers understand the children and youth they teach has important educational consequences. Are students budding citizens or future workers? Are they plants to nourish or clay to mold?

One of the most common recommendations for schools, for example, is that they should be engaged in threat assessment. Checklists are sometimes suggested to school personnel to determine when students should be considered as having the potential for harm. While such practices have their place, as a society we should be aware that these practices change how teachers think of students: not as budding learners, but potential shooters; not with the potential to grow and flourish, but with the potential to enact lethal harm.

As researchers, we have read the accounts of dozens of different school shootings, and we think educators, parents and others should begin to raise the following questions about schools.

To what extent does the school – through things like athletics, homecoming royalties, or dances and so forth – encourage what some political scientists have called the “status tournament of adolescence” that lurks behind the stories of many school shootings?

As one reads about such shootings, one often senses a feeling of social anxiety and betrayal on the part of perpetrator. Americans hold high expectations for schools as places of friendship and romance, yet too often students find alienation, humiliation and isolation. The frustration at these thwarted expectations at least sometimes seems to turn toward the school itself.

To what extent does the force and coercion employed by many schools contribute to a “might makes right” mentality and associated violence?

It is true that bullying is part of some of the stories of school shooters. Students who are bullied or who are bullies themselves will quite naturally think of schools as places appropriate for violence. There is also sometimes a rage, however, against the day-to-day imposition of school discipline and punishment. Since schools are experienced as places of force and control, for some students, they also come to be seen as appropriate places for violence.

In research on American high schools, one finds the idea that American schools are intertwined with notions of “expressive individualism” – the idea that human beings should find out and be true to who they really are on the inside. Might this also contribute to school shootings?

Suburban high schools, in particular, are seen by the middle class as places to accomplish expressive projects. Sociologist Robert Bulman points out, for example, how Hollywood films set in suburban settings focus on student journeys of self-discovery, while urban school films focus on heroic teachers and academic achievement. In the same vein, many suburban school shooters see what they are doing as acts of self-expression.

Reading stories of school shootings, one often finds moments in which the shooters claim that something inside, whether hatred or frustration, needed to find expression. An example of this is the manifesto left by Luke Woodham, who shot two students in 1997. “I am not spoiled or lazy,” he wrote, “for murder is not weak or slow-witted, murder is gutsy and daring.” The school became the place where Woodham thought he could express the gutsy and daring person he found on the inside.

Of course, it will be difficult to definitively answer the questions we have posed above. And, even if we are able to find answers, it is not clear what the proper educational response should be.

For example, self-expression might be a valuable task for schools, even if it is found to contribute in some way to school shootings. Our suggestion is simply that, instead of trying to find solutions to school shootings in the dubious arms of security technologies, or even solely through more promising public policy, society should ask deeper questions about the nature of education and schooling in American society.