Children Are the UN’s ‘Secret Weapon’ Against Climate Change 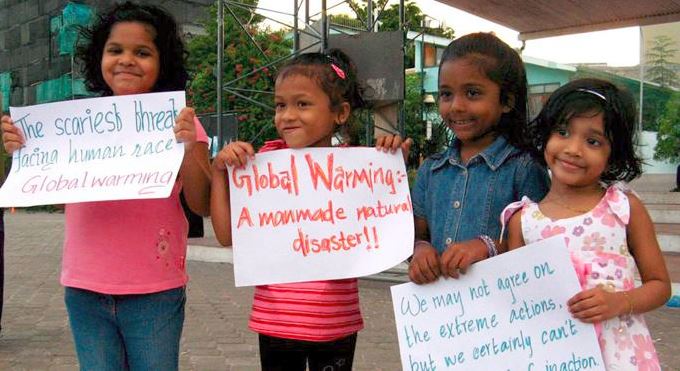 The United Nations is an outspoken proponent of taking action against global warming, and enlisting youth organizations to participate in the cause has long been part of their strategy.

Recently, however, UN panelists explained that getting young people involved against climate change isn’t just important. Rather, it was described as “one of the most effective ‘secret weapons’” in the campaign to stop global warming.

That description comes from John Olson, a science specialist at the Minnesota Department of Education, who had the opportunity to be a credentialed observer at the UN’s Climate Change Conference in Bonn, Germany.

At the conference, Olson sought out sessions and panels that focused on education and “voices of youth.” He described what he heard in a newsletter distributed to colleagues, which was shared with Intellectual Takeout:

Education was described by one speaker as one of the most effective “secret weapons” in the fight against climate change. Here are some of the comments that came from presentations and panel discussions:

-Youth voices must be heard since they will face the consequences of our actions on climate change.

-Children want quick action and not delays. They often prod their parents into action.

-Teach children to be good stewards in their daily lives.

-Combine the head (knowledge) and the heart (actions).

-Focus on education for global citizenship, not just local actions.

-Focusing on current disasters may spark interest, but often there are not long term benefits.

-Turn the first connected-generation into the first climate-aware generation… through the use of technologies, including social media, gamification and video; Include intercultural learning and relevant content.

Olson, it appears, is pleased that young people are being enlisted in the fight against global warming. And many people in America and beyond would agree with him.

It’s worth pointing out, however, that regardless of how one feels about climate change, this is not education. Teaching global warming talking points to students who cannot recite the periodic table, let alone interpret reams of climate data, might be an effective way to create a generation of environmental advocates. But it doesn’t teach them to think.

It’s an important distinction, and it brings to mind original concerns Americans had about establishing government-controlled schools.

In 1840, as Horace Mann’s Common School Movement was growing in popularity, a special legislative committee in Massachusetts met to discuss increasing government control over education. Many, looking to models in Europe, saw the effort not as a means of improving education but of molding young minds.

“After all that has been said about the French and Prussian systems, they appear to your Committee to be much more admirable, as a means of political influence, and of strengthening the hands of the government, than as a mere means for the diffusion of knowledge,” the committee reported.

Many Americans likely are comfortable with such a model. But in 1840, committee members saw the potential for abuse.

“The right to mould the political, moral, and religious opinions of his children is a right exclusively and jealously reserved by our laws to every parent,” the committee concluded, “and for the government to attempt, directly or indirectly, as to these matters, to stand in the parent’s place, is an undertaking of very questionable policy.”

How one feels about initiatives that employ children as “secret weapons” in the “fight against climate change” might depend, to some extent, on whether one views climate change as a looming apocalypse or simply another problem to be managed.

Regardless, educators should not fool themselves into believing these youth initiatives, which are thinly-veiled propaganda efforts, represent meaningful education. They do not.