5 Reasons We Should Still Read Cicero 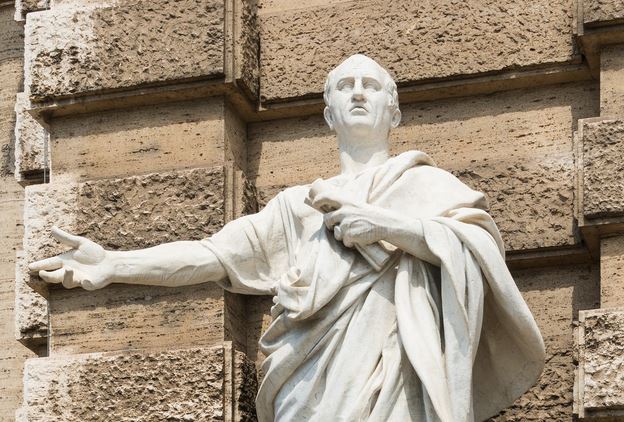 Marcus Tullius Cicero has a legacy as one of the most admired orators and statesmen of all time. Born in 106 BC, he lived through the most turbulent days of the doomed Roman Republic which was being torn apart by ambitious individuals’ lust for power and glory.

Cicero was a man who defended the Republican form of government and the rule of law in society. Cicero’s written work survives in the form of courtroom speeches, personal letters to friends, and philosophical works which are all easily accessible online. His works are filled with elegantly fluid prose and a passion for freedom. Here are five reasons we should still read Cicero today.

He Was an Enemy of Tyranny

Julius Caesar was assassinated by the Roman Senate after he declared himself dictator for life. Mark Antony was the former right-hand man of Caesar. He wanted to avenge Caesar’s death while also installing himself as a tyrant of Rome.

The Roman government had always been wary of putting too much power in the hands of one man. As a result, Rome developed a Republican form of government with separate and limited powers. Cicero admired this system and wished to defend it at all costs. Cicero decided it was his time to step up to the plate and block Antony’s advance with a series of devastating speeches entitled Philippics.

In these speeches, he condemned Antony vehemently, arguing that the Roman senate should not compromise in negotiations with such a man and echoing the sentiments of Ludwig Von Mises’ personal motto, “Do not give in to evil but proceed ever more boldly against it.” Cicero lists the crimes of Antony which included wasting the taxpayers’ money on his own expenses, threatening and killing those who openly opposed him, and passing laws with a retinue of armed guards to stop anyone opposing his decrees.

Cicero was so passionate in his condemnation of Antony that he proclaimed that laws that are passed through violence are not true laws and should not be respected as such, stating that, “For these reasons I take the view that the people of Rome are not bound at all by these laws which Marcus Antonius (Mark Antony) is said to have passed, because they were all put through by violent means.”

Cicero ardently believed that right and wrong were immutable stating that, “True law is right reason in agreement with nature,” not the whims of a greedy tyrant. Cicero risked his life to deliver his Philippics and paid the ultimate price when he was killed by Mark Antony’s soldiers in 43 BC. His oratory and tragic death crystallized his reputation as a symbol of Republican freedom.

He Advocated for Free Exchange

Cicero thought that society should be based upon twin pillars of justice and cooperation. In his first book On Duties, he writes of the four principles of justice required for people to live together in harmony: Do not harm anyone without reason, respect property rights, fulfill your obligations, and be generous within your means.

He wrote that mankind does not exist to be in constant antagonistic contest. Instead, they exist to help each other in peaceful cooperation.

Consequently, we ought in this to follow nature as our leader, to contribute to the common stock the things that benefit everyone together and, by exchange of dutiful services, by giving and receiving effort and means, to bind fast the fellowship of men with each other.

What Cicero was describing was a system of exchange that led to the mutual benefit of all; we now call this free exchange.

He Was a Defender of Private Property

The men who administer public affairs must first of all see that everyone holds on to what is his, and that private men are never deprived of their goods by public acts.

Later, in the final book of On Duties, Cicero states his own version of the famous harm principle of John Stuart Mill (that the only purpose for which power can be rightfully exercised over any member of a civilized community, against his will, is to prevent harm to others). Cicero says, “Each should attend to what benefits himself, so far as may be done without injustice to another.”

Cicero was far ahead of his time on the topic of private property.

Throughout On Duties, we see Cicero’s somber reflections on the events of his life. Cicero lived through a multitude of brutal civil wars in which there was mass devastation. Cicero concluded that violence does not effectively stop the people from regaining their freedom, and eventually, they will rally against their enemy. “Freedom will bite back more fiercely when suspended than when she remains undisturbed.”

He regales the reader with stories of paranoid tyrants living in perpetual fear that their subjects will conspire to murder their oppressor. “For those men who wish to be feared cannot but themselves be afraid of the very men who fear them.”

Cicero concludes it is best to leave people free and to win their affections in an attempt to convince them to join you instead of oppressing them. He was an advocate of voluntary association, not of force.

He Was a Huge Influence on the American Revolution

Cicero was a highly influential figure in the American Revolution. In 18th-century America, the future Founding Fathers couldn’t avoid the orations of Cicero. In 1750, Harvard required their applicants to “read, construe, and parse Cicero, Virgil, or such like classical authors,” and Princeton applicants had to have “the ability to write Latin prose, translate Virgil, Cicero, and the Greek gospels.” This meant that many of the founding fathers had a common pool of stories of the ancient world which they used to articulate the radical ideas of their day.

Cato the Younger, Cincinnatus, and Cicero were the preferred heroes of the founding fathers. Cicero was considered a model of both civic and personal virtue. John Wilson, one of the main drafters of the American constitution, adored Cicero and referenced him more than any other author in his 1790 lectures at the College of Philadelphia. Thomas Jefferson even referenced Cicero in his letter to Henry Lee, saying that he had a direct influence on his draft of the Declaration of Independence and listing him alongside Montesquieu, John Locke, and David Hume.

Cicero was an amazing writer who has influenced a monumental amount of people throughout history. The state of Missouri’s motto to this day is a quote from Cicero’s work On Laws: “Let the good of the people be the supreme law.” John Locke used the very same quote as his epigraph in his Second Treatise on Government. His writings are an important tool in any lover of freedom’s arsenal.