The Atlantic: A Crisis of Truth is Upon Us (Apart From Trump) 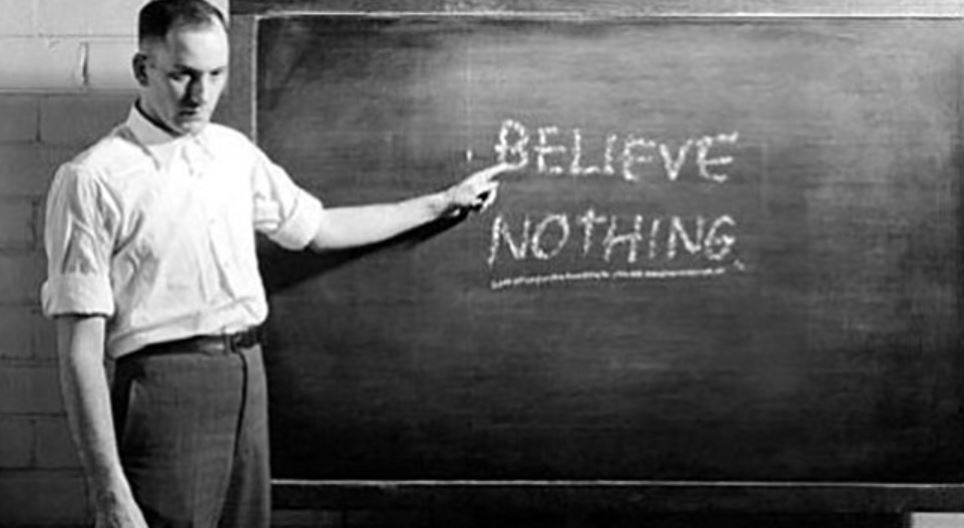 A mere one-third of Americans trust their government to “do what is right,” according to a new report by the communication firm Edelman.

Trust in the media is not much higher (42%), and while trust in business and non-governmental organizations appear stronger, both are down considerably (10 and nine points, respectively).

What’s strange is there is no clear explanation why.

“This is the first time that a massive drop in trust has not been linked to a pressing economic issue or catastrophe like [Japan’s 2011] Fukushima nuclear disaster,” firm head Richard Edelman announced, according to The Atlantic. “In fact, it’s the ultimate irony that it’s happening at a time of prosperity, with the stock market and employment rates in the U.S. at record highs.”

America’s collapse in trust in four key areas—government, media, business, and NGOs—was the largest of the 28 nations Edelman surveyed. And while one might assume the collapse stems from a certain New Yorker with bad hair who currently occupies the White House, the truth appears to be more complicated.

For one, the 2017 collapse is part of a much bigger downward trend. Gallup polling shows the collapse in trust spans several decades and involves numerous institutions: public schools, big business, the Supreme Court, banks, religion, and others (notable exceptions: the military, small businesses, and police).

Second, the phenomenon is not isolated to America. It’s happening in nations all over the world.

“This is a global, not an American issue,” Edelman told The Atlantic. “And it’s undermining confidence in all the other institutions because if you don’t have an agreed set of facts, then it’s really hard to judge whether the prime minister is good or bad, or a company is good or bad.”

The reason for this, we’re told, is quite simple: it’s gotten way harder to discern what’s true and what’s not.

From a political perspective, the consequence is simple: each side thinks the other is crazy. But those looking to genuinely understand this confusion need only look to the past.

The United States was founded during an interesting time in history. In the late eighteenth century, the Christian Aristotelian framework that had defined the West for centuries was giving ground to the Enlightenment ideas espoused by Bacon, Descartes, Locke, Spinoza, and others.

The marriage of Christian Aristotelianism and the ideas of the Enlightenment begot classical liberalism, a political philosophy that seeks to enshrine individual rights from the power of government.

If the ethos of classical liberalism can be found in the Declaration of Independence—“We hold these truths to be self-evident, that all men are created equal, that they are endowed by their Creator with certain unalienable Rights, that among these are Life, Liberty and the pursuit of Happiness”—it’s application can be found in the U.S. Constitution, which sought to protect individual freedom of religion, press, assembly, speech, and commerce from the federal government.

A lot has changed since 1776. The nineteenth century brought a host of new philosophies—Idealism, Utilitarianism, Marxism, Existentialism, Positivism, Pragmatism, and Transcendentalism (to name a few)—which in turn spawned Relativism, Critical Theory, and many others that today saturate politics, art, and culture.

When one considers the range and prevalence of these competing philosophies, the incoherence and acerbic tone of contemporary dialogue is more easily understood. The philosopher Alasdair MacIntyre once observed that our arguments seem go on forever because “there is in our society no established way of deciding between” what is true and what is not.

Philosophers, politicians, and theologians will of course debate what is true and what is not. But there are practical consequences when a people no longer can ascertain what is true.

“When truth itself feels uncertain,” The Atlantic asks, “how can a democracy be sustained?”

I don’t have an answer, but Nietzsche gives a clue as to what a democracy that has lost its understanding of truth might look like.

“What is good? – All that heightens the feelings of power, the will to power, power itself in man,” Nietzsche wrote. “What is bad? – All that proceeds from weakness. What is happiness? – The feeling that power increases – that a resistance is overcome.”