Hanukkah is About Jewish Survival 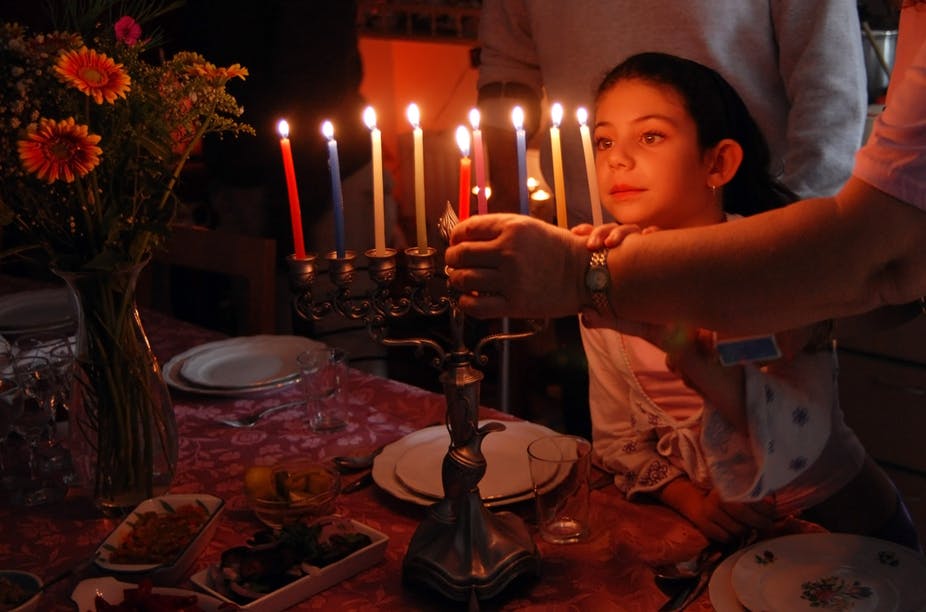 Beginning on the evening of Dec. 12, Jews will celebrate the eight-day festival of Hanukkah, perhaps the best-known and certainly the most visible Jewish holiday.

While critics sometimes identify Christmas as promoting the prevalence in America today of what one might refer to as Hanukkah kitsch, this assessment misses the social and theological significance of Hanukkah within Judaism itself.

Let’s consider the origin and development of Hanukkah over the past more than 2,000 years.

Though it is 2,200 years old, Hanukkah is one of Judaism’s newest holidays, an annual Jewish celebration that does not even appear in the Hebrew Bible.

The historical event that is the basis for Hanukkah is told, rather, in the post-biblical Books of the Maccabees, which appear in the Catholic biblical canon but are not even considered part of the Bible by Jews and most Protestant denominations.

The Maccabees receive their father’s blessing. The Story of the Bible from Genesis to Revelation via Wikimedia Commons.

Based on the Greco-Roman model of celebrating a military triumph, Hanukkah was instituted in 164 B.C. to celebrate the victory of the Maccabees, a ragtag army of Jews, against the much more powerful army of King Antiochus IV of Syria.

The Maccabees revolted against this persecution. They captured Jerusalem from Antiochus’s control, removed from the Jerusalem Temple symbols of pagan worship that Antiochus had introduced and restarted the sacrificial worship, ordained by God in the Hebrew Bible, that Antiochus had violated.

Hanukkah, meaning “dedication,” marked this military victory with a celebration that lasted eight days and was modeled on the festival of Tabernacles (Sukkot) that had been banned by Antiochus.

The military triumph, however, was short-lived. The Maccabees’ descendants – the Hasmonean dynasty – routinely violated their own Jewish law and tradition.

Even more significantly, the following centuries witnessed the devastation that would be caused when Jews tried again to accomplish what the Maccabees had done. By now, Rome controlled the land of Israel. In A.D. 68-70 and again in A.D. 133-135, the Jews mounted passionate revolts to rid their land of this foreign and oppressing power.

The destruction of the Temple of Jerusalem. Francesco Hayez, via Wikimedia Commons

The first of these revolts ended in the destruction of the Second Jerusalem Temple, the preeminent center of Jewish worship, which had stood for 600 years. As a result of the second revolt, the Jewish homeland was devastated and countless Jews were put to death.

War no longer seemed an effective solution to the Jews’ tribulations on the stage of history.

In response, a new ideology deemphasized the idea that Jews should or could change their destiny through military action. What was required, rabbis asserted, was not battle but perfect observance of God’s moral and ritual law. This would lead to God’s intervention in history to restore the Jewish people’s control over their own land and destiny.

In this context, rabbis rethought Hanukkah’s origins as the celebration of a military victory. Instead, they said, Hanukkah should be seen as commemorating a miracle that occurred during the Maccabees’ rededication of the temple: The story now told was how a jar of temple oil sufficient for only one day had sustained the temple’s eternal lamp for a full eight days, until additional ritually appropriate oil could be produced.

The earliest version of this story appears in the Talmud, in a document completed in the sixth century A.D. From that period on, rather than directly commemorating the Maccabees’ victory, Hanukkah celebrated God’s miracle.

This is symbolized by the kindling of an eight-branched candelabra (“Menorah” or “Hanukkiah”), with one candle lit on the holiday’s first night and an additional candle added each night until, on the final night of the festival, all eight branches are lit. The ninth candle in the Hanukkiah is used to light the others.

Throughout the medieval period, however, Hanukkah remained a minor Jewish festival.

How then to understand what happened to Hanukkah in the past hundred years, during which it has achieved prominence in Jewish life, both in America and around the world?

Hanukkah today responds to Jews’ desire to see their history as consequential. Pixabay.com/en, CC BY

The point is that even as the holiday’s prior iterations reflected the distinctive needs of successive ages, so Jews today have reinterpreted Hanukkah in light of contemporary circumstances – a point that is detailed in religion scholar Dianne Ashton’s book, “Hanukkah in America.”

Ashton demonstrates while Hanukkah has evolved in tandem with the extravagance of the American Christmas season, there is much more to this story.

Hanukkah today responds to Jews’ desire to see their history as consequential, as reflecting the value of religious freedom that Jews share with all other Americans. Hanukkah, with its bright decorations, songs, and family- and community-focused celebrations, also fulfills American Jews’ need to reengage disaffected Jews and to keep Jewish children excited about Judaism.

Poignantly, telling a story of persecution and then redemption, Hanukkah today provides a historical paradigm that can help modern Jews think about the Holocaust and the emergence of Zionism.

In short, Hanukkah is as powerful a commemoration as it is today because it responds to a host of factors pertinent to contemporary Jewish history and life.

Over two millennia, Hanukkah has evolved to narrate the story of the Maccabees in ways that meet the distinctive needs of successive generations of Jews. Each generation tells the story as it needs to hear it, in response to the eternal values of Judaism but also as is appropriate to each period’s distinctive cultural forces, ideologies and experiences.

Alan Avery-Peck is Kraft-Hiatt Professor in Judaic Studies at the College of the Holy Cross.