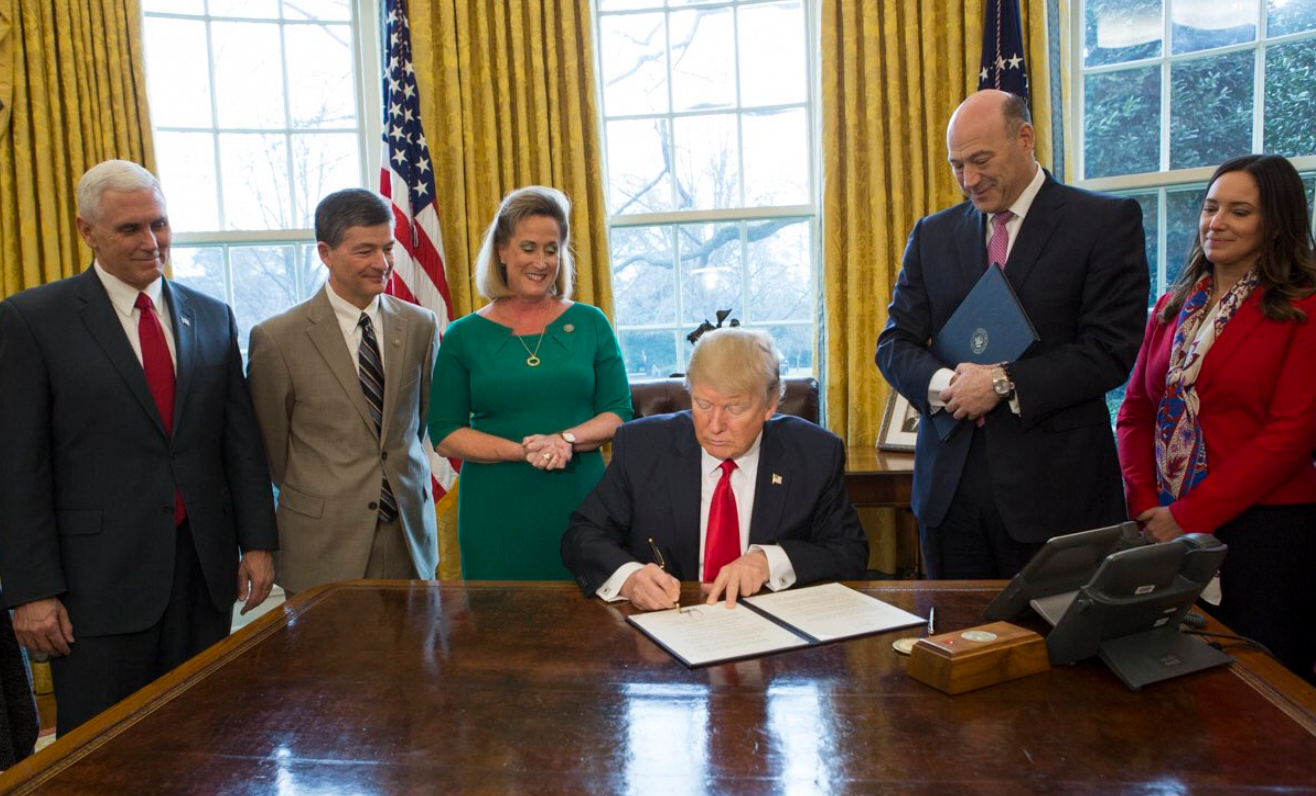 President Donald Trump is prepared to sign a late-term abortion ban, which the House passed Tuesday evening, if the Senate follows suit. A statement from the White House said the proposed law would promote a “culture of life.”

Proponents say the measure, prohibiting abortions after 20 weeks of pregnancy, would restrict the procedure at the point when some medical experts say the unborn baby can feel pain.

The House passed the ban on late-term abortions shortly after 6 p.m. by a vote of 237-189, mostly along party lines.

Not voting were Republicans Jim Bridenstine of Oklahoma, Billy Long of Missouri, and Billy Loudermilk of Georgia, and Democrats Jim Hines of Connecticut and Nevada’s Ruben Kihuen, Jacky Rosen, and Dina Titus.

The United States is one of only seven countries that allow elective, late-term abortions without restrictions.

The bill could have a tough time passing the Senate, however, where Republicans’ margin as the majority is 52-48.

This was a great day! US House passed the Pain-Capable Unborn Child Protection Act & I got to thank sponsor @RepTrentFranks for his efforts. pic.twitter.com/Eg71cuxsaF

Thank you House for passing #MicahsLaw & protecting the unborn. It’s time for the Senate to do the same. #TheyFeelPain https://t.co/Tu6l5IRiex

In a statement of administration policy, the White House announced it strongly supports the legislation–called the Pain-Capable Unborn Child Protection Act–sponsored by Rep. Trent Franks, R-Ariz. The measure, which has 170 co-sponsors, is also known as H.R. 36.

“H.R. 36 would generally make it unlawful for any person to perform, or attempt to perform, an abortion of an unborn child after 20 weeks post-fertilization, with limited exceptions,” the White House statement says. “The bill, if enacted into law, would help to facilitate the culture of life to which our nation aspires.”

Additionally, the bill would promote a science-based approach to unborn life, as recent advancements have revealed that the physical structures necessary to experience pain are developed within 20 weeks of fertilization. The United States is currently out of the mainstream in the family of nations, in which only seven out of 198 nations allow elective abortions after 20 weeks of pregnancy. America’s children deserve the stronger protections that H.R. 36 would advance. If H.R. 36 were presented to the president in its current form, his advisors would recommend that he sign the bill into law.

Days before the House vote, the Susan B. Anthony List, a pro-life group, noted that most other countries block abortions at this stage of a woman’s pregnancy:

Why are we in the club with North Korea, China & Vietnam to allow elective abortions after 5 months? #TheyFeelPain #ProLife pic.twitter.com/n2AkNFXt8d

But NARAL-Pro Choice America, which considers itself an abortion rights group, pushed Congress to vote against the bill:

House GOP is voting on a 20-week abortion ban today. We just delivered over 20,000 petitions to @GOPLeader to tell them: #NoAbortionBan! pic.twitter.com/QoB5XI4QXm

If passed and signed into law by Trump, the measure would ban abortion after 20 weeks, the point when it says “pain receptors (nociceptors) are present throughout the unborn child’s entire body.”

The official position of the American Congress of Obstetricians and Gynecologists is that unborn babies are not developed enough to feel pain until 24 weeks.

The bill includes exceptions for incest, rape, or to save the life of the pregnant woman.

March for Life, a group that organizes an annual rally marking the anniversary of the Supreme Court ruling legalizing abortion, stressed the need to protect unborn children from suffering.

Ken McIntyre contributed to this report.

[Image Credit: Office of the President of the United States, Public Domain]