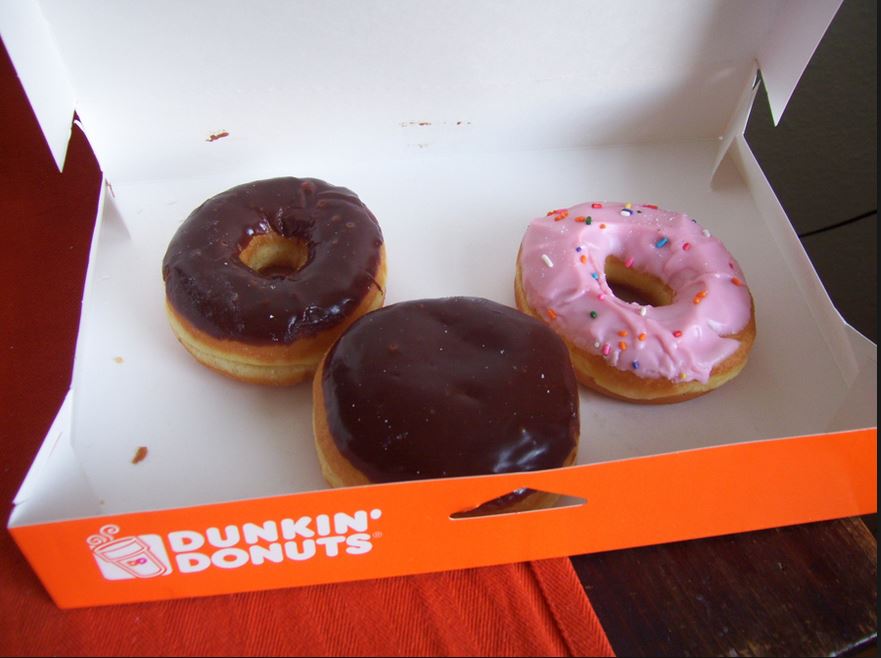 As a professor, I’ve attended many administrative meetings. The one near-constant thing I, and others, have noticed at these meetings is that the coffee always runs out, but at least a small remnant of a donut remains. Why this occurs tells a great deal about how we use social norms to solve pool resource problems common in economic life. And how those social norms may have their limits.

Scholars do not like to attend meetings. Organizers incentivize faculty to participate by appealing to our self-interest in the form of sugar and caffeine. Trays of pastries are laid out in the open while coffee sits ready in a stainless-steel pot. Faculty make a beeline for the food once they arrive, grabbing a donut or two and filling their cups with coffee. After a short time, people return for seconds.

When one donut remains, something interesting occurs: the next person to go for the pastry plate usually cuts the donut in half, usually followed by another person who cuts the half in half, leaving a quarter of the pastry in place. The consumption of the donut typically stops there, although on rare occasions I’ve seen people pick small morsels off the quarter donut.

We know people want to eat the treat, but nobody seems to want to claim the last morsel. At a recent dinner, one colleague at another school even copped to the fact that he is a donut addict but would never take the last pastry in its entirety, but would cut it in half (that conversation inspired inspired this article).

The coffee tells a different story. When people begin returning for their third cup, the pot is empty. Perhaps this happens because faculty drink more coffee than they eat donuts, or maybe the meeting planners consistently underestimate the demand for caffeine. However, there is actually an economic and cultural process going on here; it tells us about the management of resources that are more important than coffee and donuts (if such resources exist, that is).

The Tragedy of the Commons and the Coffee

Coffee and donuts laid out at a meeting represent common pool resources (CPR). A CPR is defined as a resource that is non-excludable, yet rivaled. Non-excludability implies anybody in the room has open access to the resource; nobody, in essence, owns the resource and anybody can consume it. Rivaledness means that the resource is scarce and the more one person consumes, the less other people can enjoy. For every cup of coffee I drink, there is less for someone else.

The combination of non-excludable yet rivaled leads to a “tragedy of the commons,” wherein everybody rushes to use the resource and potentially depleting it to extinction. Garrett Hardin coined this term in his famous paper entitled, “The Tragedy of the Commons.”

The tragedy of the commons helps us understand the near-exhaustion of various ocean fish and bison in the late 1800s. It even explains traffic jams where open access to the roadway leads to too many people using the limited space. With non-excludable access to the limited supply of coffee, the tragedy of the commons accounts for the empty coffee pots.

But what about the donuts? Donuts rarely “go extinct” at meetings. Some portion always remains. The reason for this relates to strong social norms guided by a concern for personal reputation combined with the high visibility of the good’s use in a small community. The person who consumes the last bit of a scarce resource often becomes tagged as “stingy,” someone who doesn’t think of the interests of others.  We still want the good, but we restrain ourselves from taking the last piece for fear of being labeled greedy, particularly when everybody in the room can see the culprit. This explains why the one remaining donut often gets cut in half multiple times and there is almost always a bit of it left.

The coffee, if you remember, is different. Contained in a metal pot, the resource is more difficult to monitor and determine who took the last drop. If the stream dries up whilst pouring one’s second or third cup, it is easy to feign ignorance about knowing how much was left  — though we may feel a tinge of guilt for taking the final ounce.

Social Norms Save the Donuts

In terms of solving a tragedy of the commons, this example shows how social norms – particularly the desire to avoid appearing “stingy” — help to constrain us from using a resource to complete extinction. But these social norms only tend to work when one’s use of the good is highly visible. Also when one’s self-interest is checked by a desire to preserve the reputation of being thoughtful of others.

In smaller communities where individuals have repeated interaction, such reputational concerns matter a great deal. Moreover, if the use of the good is more opaque, all bets are off and self-interest drives us to get that last ounce of caffeine before anyone else. The final donut on an open tray during a meeting will get cut asymptotically until only a small morsel is left. But if donuts are left for faculty in an unsupervised kitchen, you can bet the treats would disappear quickly.

Norms in Lieu of Property Rights

Free-market economists assert that one way to solve a tragedy of the commons is to define individual property rights in the common pool resource, providing a greater incentive to preserve the good in the long run. But that isn’t always possible, sometimes due to the nature of the good, or the lack of an agreed upon definition of who gets to own the property. For instance, how would one reasonably determine the number of donuts to pre-assign rights over for each faculty member? Especially if you do not know if anybody will be hungry? Some meetings suggest you bring your own food, but less faculty attend those because the incentive of “free” food is gone.

Lacking clearly-defined property rights, social norms grow more important in managing the use of common pool resources. However, those norms only tend to work in smaller, homogenous communities, where certain conditions apply: 1) the open use of the resource is fairly visible; 2) there is repeated interaction between individuals; 3) reputation among one’s peers matters more; and 4) there is an expectation that shame will be imposed upon those violating the norm.

As societies grow larger and social interactions more infrequent and anonymous, such norms become less effective. This, in turn, leads either to calls for well-defined property rights or coercive regulation wherein use of the good is policed, and transgressions punished by a government. The latter often tends to be very costly for society, not only in terms of monitoring and enforcement costs, but also the deadweight loss people expend to “cheat” the regulation — or ask for privileged access despite the regulatory rules.

Political economists like to think about creative ways to assign property rights to scarce resources, or design public policy in ways that minimize the deadweight losses and rent-seeking that arise when such rules are established. Reliance on social norms provides a third option, combining aspects of property rights and external regulation.

In small communities, individuals have an inalienable private property right over their own reputation. People are more likely to interact with those who maintain a trustworthy and “other-regarding” reputation. Violations of community norms bring shame upon individuals and damage their reputation, helping to keep one’s drive to “cheat” the norm in check. When it comes to managing a common pool resource, keeping the resource visible to the community allows these norms to be tested and monitored, providing valuable information about the character of others. Think of that the next time you are tempted to take the last donut. Oh, and please save me a cup of coffee.

—
Anthony Gill (Ph.D. UCLA) is a professor of political science at the University of Washington, recipient of the 1999 UW Distinguished Teaching Award, author of The Political Origins of Religious Liberty (Cambridge University Press) and Rendering unto Caesar (University of Chicago Press), and will take the last donut when nobody is looking (but don’t tell anyone).