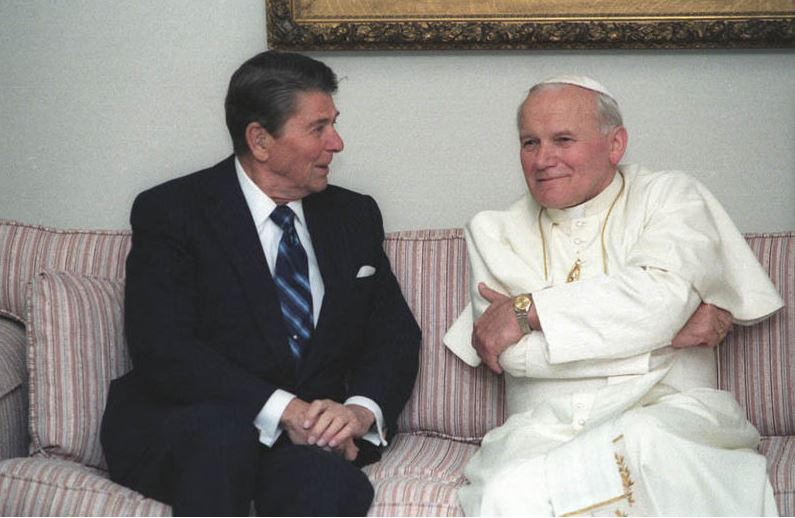 Both the Pope and the president deserve better.  So does the author.  So what’s the problem?  The problem is the divide that currently exists in America, the divide between people of faith and people without it.

Paul Kengor of Grove City College has written an account of the relationship between Pope John Paul II and President Ronald Reagan that is at once compelling and unabashedly faith-filled.  Readers with a similar approach to life will come away with a deeper appreciation of the roles that this Pope and this president played, separately and together, in bringing about the fall of the Soviet Union, as well as a successful—and peaceful—end to the Cold War.  Readers who do not share Professor Kengor’s approach will likely dismiss one of these two historical figures as either a phony or a nut case.  And that really is too bad.

Which one, you ask?  The president, of course.  Not even the most secular among us would dismiss the saintly—and now sainted—Pope in such terms.  Even most secularists have taken this John Paul II at his word and generally held him in high esteem.  But Reagan has long been fair game for such charges—and worse.  He was, after all, an actor, a politician, and a conservative (for at least half of his long life).

What follows is at once a review of the Kengor book and an open letter of sorts to the secular-minded, particularly the secular-minded who claim to be open-minded.  This lengthy, but less than thorough, dual biography deserves to be taken very seriously indeed.  To be sure, there are moments when its contents border on dual hagiography, but their stories (especially Wojtyla’s, but to some extent Reagan’s as well) more than border on the heroic—and certainly deserve a hearing.

While the book does deal with the early lives and parallels of Ronald Reagan and Karol Wojtyla, the bulk of it focuses on their near simultaneous assassinations and subsequent efforts to subvert and bring an end to the Soviet Union.

What becomes apparent in these pages is that not just Wojtyla, but Reagan as well, was a serious Christian—and not just belatedly, but for most of his life.  Here Kengor’s case is quite thorough and thoroughly compelling.

2017 is the centenary of a miracle: the appearance of the Virgin Mary at Fatima.  This story weaves its way in and out of Kengor’s larger story.  It’s clear to the author that both the Pope and the president took Fatima and its prophecies seriously.  (The last of these prophecies suggested that an attempt would be made to kill a Pope who stood against the product of another milestone of 1917—the Bolshevik Revolution.)

What’s also quite clear is that both men took the attempts on their lives in March and May of 1981 as hints of a divine plan that their lives had been spared for a larger purpose.  That purpose was to bring about a peaceful end to the Soviet Union and the Cold War.

The attempt on President Reagan’s life was neither mysterious nor complicated.  John Hinkley was an apolitical lone gunman.  Not so with Mehmet Ali Agca, who shot Pope John Paul II on May 13, 1981, which also happened to be the anniversary of Fatima.  Mystery still surrounds the actions and motivations of this Turkish gunman.

Kengor is convinced that the final decision to kill the Pope came from somewhere within the top ranks of the Soviet hierarchy.  No smoking gun was ever revealed, but the well-established link between Agca and Bulgarian authorities point to a Moscow tie.  Kengor also believes that buried within the CIA is a document that presents solid evidence of a Soviet connection to the assassination attempt.

What is beyond dispute is the threat that this Polish Pope posed to the Soviet regime.  From the outset of his papacy, John Paul set about reversing the détente policies of Pope Paul VI.  President Reagan did the same for the United States following another set of bipartisan détente policies, specifically those of Richard Nixon, Gerald Ford, and Jimmy Carter.

The heart of this book traces the often coordinated efforts of this Pope and this president between the onset of Karol Wojtyla’s papacy and the end of Ronald Reagan’s presidency.  To be sure, there are other figures of importance in this story, especially Reagan’s national security adviser, William Clark, and his CIA director, William Casey, both Catholics.

One other figure of importance must also be mentioned: Mikhail Gorbachev.  While quite committed to statist solutions, he was also committed to genuine reform of a terribly sclerotic and, yes, evil, regime.  He failed in his efforts.

Was Gorbachev disappointed with his failure?  Kengor suggests perhaps not.  The author raises another intriguing question, which is also one that he cannot answer with any certainty.  Was Gorbachev a closet Christian?  Tantalizing evidence suggests that he might have been—and might still be.

Was the last Soviet leader part of the “DP” of this Pope and this president?  Once again, there is no answer to be had.  DP?  There was a time, namely early in the Cold War, when those two letters stood for displaced person.  Not so for Wojtyla and Reagan.  For them, it was shorthand for Divine Plan.

Readers on either side of the current divide among us will regard such talk, and the thinking behind the talk, very differently.  One can only hope that readers on one side of this divide will take both of these men very seriously and not dismiss one of them out of hand.  The story is too compelling, too important, and too well told for that.