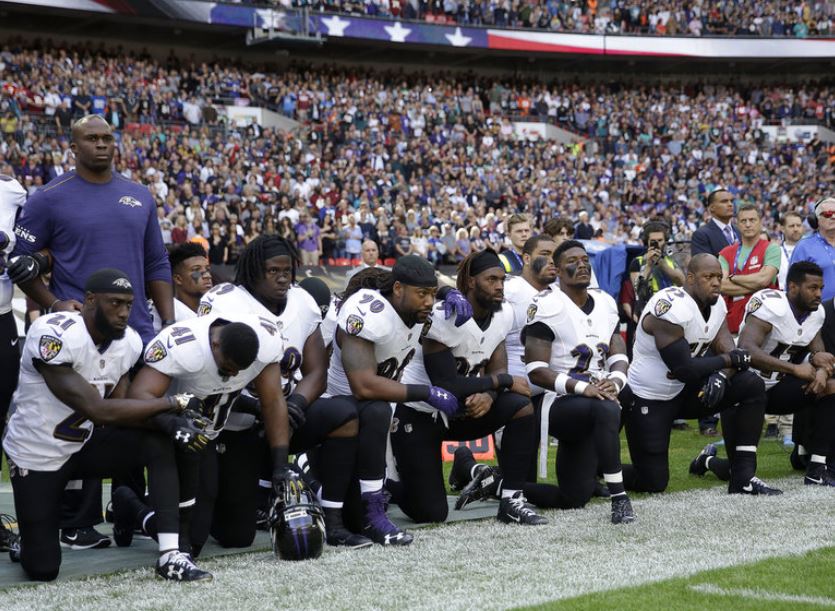 The Washington, D.C.-based digital media and survey research company’s numbers show a collapse of the NFL’s net favorability ratings since Sept. 21, which fell from 30 percent to 17 percent in a single week. (Morning Consult was founded in 2013 and has partnered with publications such as Politico, Vox, and Bloomberg.)

As recent as early July, the NFL’s net favorability rating was above 50 percent and in line with average net favorability ratings of other professional sports. The fall appears to stem largely from dissatisfaction among self-identified Trump voters, a demographic whose unfavorable view of the NFL surged from 11 percent to 33 percent.

The decline comes amid a tumultuous start to the NFL season, which saw some players refuse to stand during the National Anthem, an action that provoked a sharp rebuke from President Donald Trump. In response to the president’s rebuke, some 200 players sat or kneeled while the National Anthem was played in Week 3.

Earlier this week, NFL players and some 25 owners met with Goodell in New Jersey to discuss the demonstrations. “It was a whole bunch of opinions shared,” New York Giants linebacker Jonathan Casillas said. “There was nothing we decided we’re going to do collectively.”

The NFL does seem to have a problem on its hands. While NFL players don’t have “a right” to protest the National Anthem on gameday, the idea of compelling people to participate is repellant. So what’s the best course?

One possible solution might be to allow players to remain in the locker room during the National Anthem, as is standard practice for most college football games.

The NFL’s game operations manual states that “failure to be on the field by the start of the National Anthem may result in discipline.” Allowing players to remain in the locker room would avoid forcing people to honor the flag but remove the spectacle of people kneeling and doing calisthenics during the ceremony–acts many Americans find offensive. The NFL certainly has no obligation to allow players to use their stadiums as soapboxes for political causes, particularly for acts that appear to be damaging its brand.

Would this solution work? Or is the problem more complicated than this?