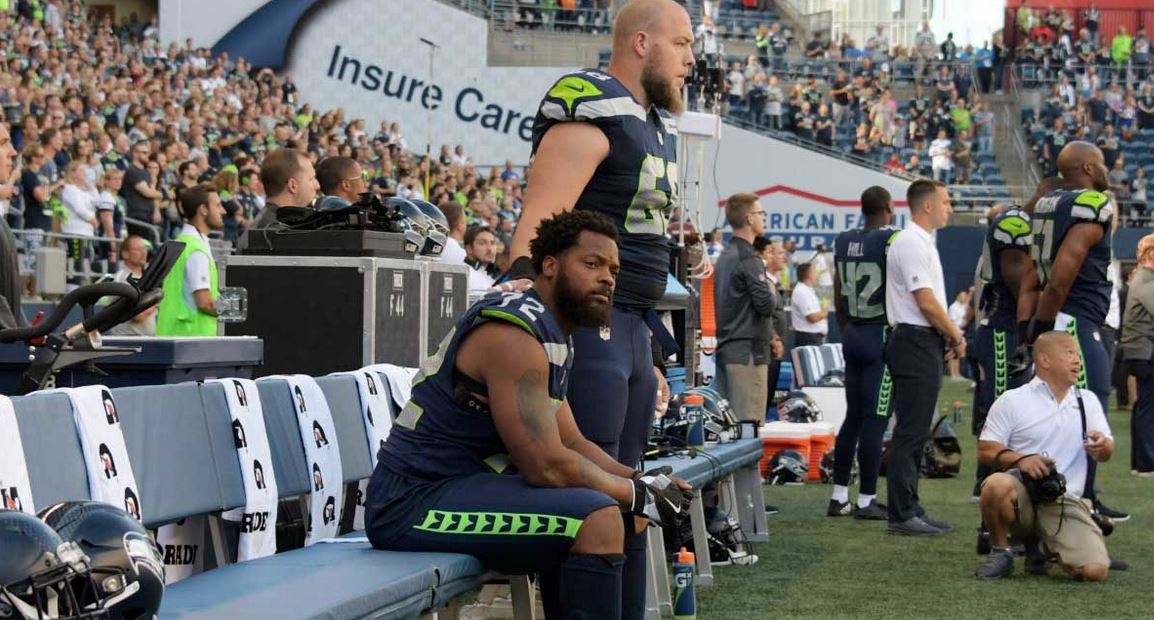 In a world in which politics now seeps into everything, the degrading state of the NFL has become a perfect example of how our national consensus has frayed.

Undoubtedly, the launch of this year’s NFL season came with some positive displays of patriotism.

The Cleveland Browns ran onto the field with first responders and military personnel to loud applause.

“I thought it was pretty cool,” said NFL player Joe Thomas. “I think doing that shows the unity that this team is trying to promote between our football team and first responders, military, police, and hopefully show a positive effort to move forward and to try to make America a better place for everybody.”

But the opening weekend also began with an increasing number of players sitting down or kneeling for the national anthem, a precedent set last season by the now unemployed quarterback Colin Kaepernick.

When Kaepernick decided to kneel for “The Star-Spangled Banner” in 2016, he said:

I am not going to stand up to show pride in a flag for a country that oppresses black people and people of color. To me, this is bigger than football and it would be selfish on my part to look the other way. There are bodies in the street and people getting paid leave and getting away with murder.

Sports operate as one of the few common traditions Americans have in an increasingly atomized world.

As trivial as a ballgame may seem, it can act as a language of shared memory and familiar reference. It’s one of the various ways in which we get the melting pot to work in this vast and diverse country.

In the wake of the mass murder of thousands of our fellow Americans on 9/11, there was an enormous outpouring of patriotism at games around the country as players and fans created numerous gestures of solidarity in the face of barbaric attacks meant to destroy our civilization.

And some of the most touching displays of that simple but potent message of unity came from the football field. Players, teams, and fans displayed wide-ranging and genuine support for their country.

Our divisions didn’t matter. We were all under attack, and we knew it.

Americans of almost every background had been targeted and killed in the World Trade Center and the Pentagon. Islamists wanted us all dead.

From New York, to Alabama, to California, Americans were unified in support of their country and their flag.

“To me, there is an element of symbolism here with big-city America playing heartland America on the friendly fields of strife,” said then-NFL Commissioner Paul Tagliabue at a game between the New York Giants and Kansas City Chiefs. “We’re very proud to be back.”

Americans stepped back from political squabbles and even Congress got together to demonstrate solidarity. Republican President George W. Bush was movingly greeted with chants of “USA! USA! USA!” in liberal New York City.

The fissures of our society that certainly existed then as now, were smoothed over by the most obvious national threat. The motto of the time was: “United we stand.”

How things have changed 16 years later.

The players who didn’t stand for the anthem have cited numerous reasons, such as police brutality and racism, but the general, overarching message they are sending is: “United no more.”

Many NFL fans have responded to this message by simply tuning out. Thursday’s game between the New England Patriots and Kansas City Chiefs was the worst rated opener since 2009, and follows the downward trend of the league’s ratings in general.

While many factors may explain why Americans are tuning out of professional football, polls suggest that politics and player protests are a major cause. Viewers cited similar reasons for abandoning the increasingly left-wing and political ESPN, a national sports news network.

It turns out that Americans don’t want to follow up on Sunday morning sermons with political sermons on Sunday afternoon.

Maybe the moment of togetherness after 9/11 was a mirage, and maybe it can’t be duplicated unless we collectively see what threatens us in the most horrifying and graphic way.

However, one thing is for sure, recreating national unity can’t come from top-down economic solutions or policies. It can only come from a healthy, revitalized culture and leaders who know how to channel it in the right direction.

The NFL’s kneeling problem is getting worse, and that’s a bad sign for America.