Diocletian’s Great Persecution of Christians: How it Began 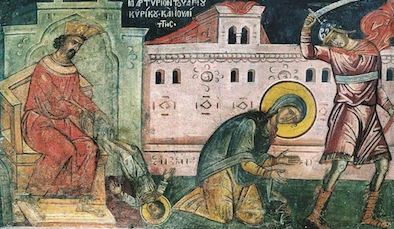 The rise of Christianity in Rome was neither linear nor neat. At various times, it was met with resistance and bloodshed.

Yet prior to the rise of Emperor Diocletian (244 A.D. – 311 A.D.), Christians had lived relatively free of state persecution for many decades, a period Eusebius called “the little peace of the Church.”

While Rome in the third century had begun to codify anti-Christian laws, persecution was “relatively limited and local,” according to Bruce Gordon, a professor at Yale University. And that persecution mostly came to a halt following the death of the emperor Valerian (d. 260 A.D.).

This changed at the beginning of the fourth century when Diocletian issued what became known as the Great Persecution, a series of laws that began to purge Christians from public offices, destroy Christian churches and literature, and punish those who refused to offer sacrifice to traditional Roman deities.

The edicts followed the martyrdom of Marcellus of Tangier (d. 298 A.D.), a centurion who refused to participate in a military celebration that demanded sacrifice to Roman gods.

When he was told that as a soldier of the Roman army he had no choice in the matter, Marcellus is said to have resigned his commission on the spot. Roman officials were not happy.

Here is Edward Gibbon’s description of the event in The Decline and Fall of the Roman Empire:

“It could scarcely be expected that any government should suffer the action of Marcellus the Centurion to pass with impunity. On the day of a public festival, that officer threw away his belt, his arms, and the ensigns of his office, and exclaimed with a loud voice, that he would obey none but Jesus Christ the eternal King, and that he renounced forever the use of carnal weapons, and the service of an idolatrous master. The soldiers, as soon as they recovered from their astonishment, secured the person of Marcellus. He was examined in the city of Tingi by the president of that part of Mauritania; and as he was convicted by his own confession, he was condemned and beheaded for the crime of desertion.”

Not everyone was quite as comfortable as Gibbon with the court’s swift action. According to the Roman poet Prudentius, at Marcellus’ trial a Christian scribe named Cassian “threw down his pen and tablets” and refused to sign the death order. He too was executed.

Not long after these events transpired, Diocletian spent a winter in retreat in Nicodemia (a city in what today is Turkey) with Galerius, a Caesar under Diocletian who despised Christianity. During their time together, Gibbon tells us, Galerius persuaded Diocletian to establish an Imperial council that “it may be presumed…insisted on every topic which might interest the pride, the piety, or the fears, of their sovereign in the destruction of Christianity.”

The fruits of the meeting were a series of edicts calling for the destruction of Christian churches and scriptures. Christians also were forbade from assembling to worship. Though Diocletian hoped to achieve all this “without bloodshed,” blood soon flowed (and boiled).

In Nicodemia, almost immediately after the edict was made public in the “the most conspicuous” part of the city, a Christian named Eutius tore it down. He was promptly arrested, tortured, and burned alive, becoming the first of an untold number of Christian martyrs who experienced brutal deaths. These include Diocletian’s own household staff and an entire congregation of Christians who were burned alive in the town of Phrygia.

Fortunately for Christians, Diocletian, who was a far more able administrator than Galerius, retired in 304 A.D.

Galerius, whom most historians describe as a brutal dullard, found that no matter how many Christians he killed, he simply could not get rid of them. After several years of trying, he finally issued the famous Edict of Toleration in 311 A.D., which legalized Christianity throughout Rome. Weeks later Galerius died of an affliction Eusebius described as “a malignant ulcer…down in his secret parts.” (Modern physicians have speculated Galerius suffered from Fournier gangrene [don’t click it!] or perhaps bowel cancer.)

Did this great persecution of Christians, which lasted for nearly a decade, stem from the single act of Marcellus, who refused to participate in a pagan ritual? It’s impossible to say with any certainty, but it’s unlikely. Most historians suggest larger forces were at work, that a final showdown between paganism and Christianity (which became the official religion of Rome in 380) was inevitable as more and more Christians assumed public stations and offices.