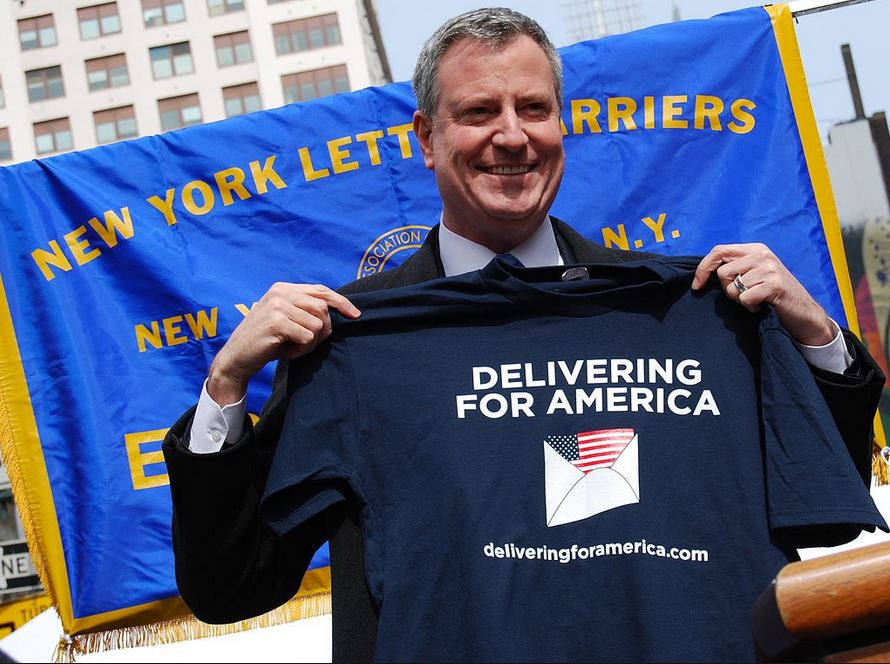 If you are one of the millions who passes through New York City via the Cross Bronx Expressway, you have seen up close the devastating impact of New York City’s rent controls. As you grip your steering wheel on the poorly maintained expressway and look at the terrible conditions of the tenements all around, you see scenes that for a moment could make you believe you are looking at a bombed-out city in Europe after World War II, not 21st Century America.

Sadly, the root causes of urban decay do not penetrate the consciousness of New York City’s mayor, Bill de Blasio. New Yorkers are suffering under rent controls, and yet, the mayor is gearing up for still larger battles against the laws of economics.

In a candid interview in New York Magazine, de Blasio wants us to believe that the residents of New York are now all central-planning socialists and communists:

“I think people all over this city, of every background, would like to have the city government be able to determine which building goes where, how high it will be, who gets to live in it, what the rent will be. I think there’s a socialistic impulse, which I hear every day, in every kind of community, that they would like things to be planned in accordance to their needs.”

Notice the mayor’s not so subtle allusion to Marx who wrote, “to each according to his need.”

Notice, too, the specificity in de Blasio’s dystopian vision. His all-knowing commissars will even select where you get to live.

What’s in the way of de Blasio’s totalitarian dreams? In his words, the problem is a legal system “structured to favor private property.” The mayor points to “[H]undreds of years of history that have elevated property rights and wealth to the point that that’s the reality that calls the tune on a lot of development.”

Does de Blasio really think developers will follow the dictates of his commissars? Would he seize the tools of production if he wasn’t hindered by the Constitution and the courts?

In the mayor’s world, the only economic liberty and personal liberty you are entitled too is what he grants you. Despite the failures of collectivism in the Soviet Union, Venezuela, North Korea and other communist paradises, de Blasio believes this time the results of totalitarian collectivism will be different.

Regarding housing, De Blasio ought to heed the warning of the former Foreign Minister of Vietnam, Nguyen Co Thach. Reflecting on the impact of rent controls on his country, Thach observed, “House rents had been kept low… so all the houses in Hanoi had fallen into disrepair. The Americans couldn’t destroy Hanoi, but we have destroyed our city by very low rents. We realized it was stupid and that we must change policy.”

Thach came to believe that a “romantic conception of socialism… destroyed Vietnam’s economy in the years after the Vietnam war.” “Whoever fights the objective laws of economics will always be defeated,” concluded Thach.

If Thach were to visit the Bronx today he might wonder why New York City, a center of capitalism, was following the same disastrous path as a communist country. He would probably be mystified at the idea of instituting still more controls on housing.

“The vitality of New York has always depended very substantially on newcomers, not only immigrants from overseas, but talented people from around the country who are attracted to New York by its great professional opportunities… Rent regulation, however, is almost perfectly designed to punish newcomers.”

In his book The Fatal Conceit, Nobel laureate Friedrich Hayek wrote, “The curious task of economics is to demonstrate to men how little they really know about what they imagine they can design.”

While Bill de Blasio goes on imaging what he can design, he is unlikely to be reading Hayek. Are New Yorkers as ignorant of the laws of economics as is de Blasio? If so, the future of freedom for New York City residents may be bleak indeed. During the next economic recession, I would expect populist totalitarian visions, like de Blasio’s, to grow in popularity.

Just over 200 years ago, in 1816 Thomas Jefferson wrote these sobering words, “If a nation expects to be ignorant and free in a state of civilization, it expects what never was and never will be.” We can hope we heed Jefferson’s warning before it is too late.