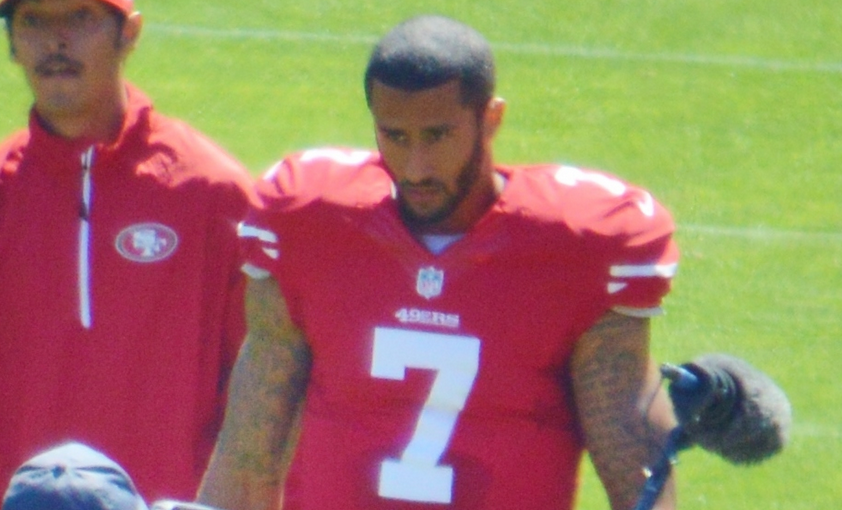 Free agent NFL quarterback Colin Kaepernick will be featured in a Black Lives Matter collection at the National Museum of African American History and Culture, museum curators announced this weekend.

USA Today Sports reports items belonging to Kaepernick will be incorporated into the museum’s Black Lives Matter collection. The quarterback became a symbol of the nation’s complicated racial politics and social relations when he declined to stand for the national anthem during the 2016 NFL season. The quarterback said his gesture signaled solidarity with the Black Lives Matter movement.

“The National Museum of African American History and Culture has nearly 40,000 items in our collection,” sports curator Damion Thomas told USA Today. “The Colin Kaepernick collection is in line with the museum’s larger collecting efforts to document the varied areas of society that have been impacted by the Black Lives Matter movement.”

Featured items will include shoes and a game-worn jersey.

The quarterback’s protest inflamed racial and political tensions around the country. He returned to San Francisco’s starting lineup in advance of its week six game against the Buffalo Bills in October 2016. Anti-Kaepernick displays outside the Bills stadium before the game prompted allegations of racism.

Kaepernick was released from his contract with the San Francisco 49ers in March 2017 and is currently a free agent. He finished the 2016 NFL season on 2,241 passing yards, 18 touchdowns, and four interceptions.

The quarterback’s admission into the nation’s premier black history museum was fairly speedy relative to Thomas, only the second black man in American history to serve on the Supreme Court. The Daily Caller News Foundation reported that Thomas was not included in the museum in 2016. His exclusion prompted resolutions in both houses of Congress urging his incorporation in the museum.

Thomas was born in Georgia’s coastal lowlands among impoverished Gullah speakers. By his own account, he did not master English until his early 20s. He came of age in Jim Crow Savannah, Georgia, where he was ridiculed by white neighbors and classmates for his unpolished style. During this period, most public spaces in Savannah were segregated by race.

Despite the startling racial injustices of his youth, he went on to the College of the Holy Cross and Yale Law School. He was appointed to the Supreme Court by President George H.W. Bush in 1991.

The museum has consistently denied that it applies ideological litmus tests in preparing its exhibits.

“There are many compelling personal stories about African-Americans who have become successful in various fields, and obviously, Associate Justice Thomas is one of them,” a spokesman said. “However, we cannot tell every story in our inaugural exhibitions.”

“We will continue to collect and interpret the breadth of the African-American experience,” the spokesman added.