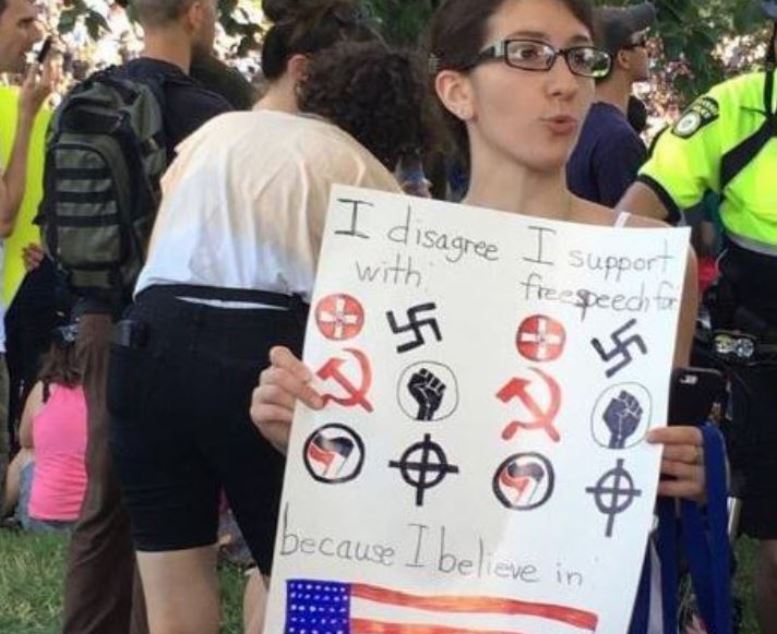 Irony punctuation is an age-old (and effective) literary device writers use as a sort of wink to readers.

Techniques vary, but a particularly popular device is the use of “scare quotes,” which indicate to readers the word or phrase in the quotes should be viewed with skepticism. (A less subtle way of conveying this would be prepending the quote with the words “so-called.”)

Recent examples can be found in how the media covered the rally in Boston over the weekend.  Organizers of the event stressed that the event was peaceful and was not affiliated with the white supremacist gathering in Charlottesville a week earlier.

The press clearly was not persuaded. Pretty much every media outlet that covered the event used scare quotes around the words “free speech.”

What led to such skepticism? Well, the speaking lineup featured some unsavory elements, to be sure. This included a few controversial right wing figures – like this guy – as well as a speaker from BDS (Boycotts, Divestment, and Sanctions), a hardline pro-Palestinian group.

There were also reports indicating that members of the Ku Klux Klan would attend the event.

However, the Atlantic notes that it’s not clear there was any connection between the Charlottesville “Unite the Right” rally and the Boston event. The Washington Post also reports that “there was little, if any, visible KKK presence at the rally.”

Like the press, however, the estimated 40,000 counter-protesters on hand were clearly not buying the idea that this was a free speech rally.

As CNN reports, counter-protesters carried signs with messages such as “No Trump. No KKK. No racist USA” and “Americans against hate.” They merrily chanted, “Hey hey, ho ho, white supremacy has got to go.”

So was the event about hate or free speech?

It’s difficult to say. It’s certainly possible the rally was a pretext to share extremist views in the wake of the tragedy in Charlottesville, but one doesn’t find evidence of hate while scouring media reports—unless one counts the actions of the counter-protesters, some of whom were hurling urine, bottles, and other projectiles, according to the Boston PD. Thirty-three people were arrested in total.

#BPD is asking individuals to refrain from throwing urine, bottles and other harmful projectiles at our officers.

In the wake of the Boston rally, a few things seem certain. First, the free speech rally was poorly planned and executed. Only a few dozen people atteneded the rally to support free speech, reports suggest. One libertarian scheduled to speak, Samson Racioppi, explained to a local reporter “how unplanned of an event it was,” noting he was never even told where he was supposed to speak and had no way to reach event organizers.

Second, holding mass protests to respond to free speech is becoming not just socially acceptable, but a bit of a fad. Forty thousand people turned out to counter-protest a tiny, poorly-executed free speech rally. The response is not just disproportionate, it’s foolish and counter-productive.

Finally, rallies that use intimidation and the threat of force (or actual force) to suppress dissenting views–even vile ones–mock the fundamental concept of free speech. As Noam Chomsky has astutely observed, speech is not free if only sanitized opinions are protected.

“If liberty means anything at all, it means the right to tell people what they do not want to hear,” he wrote.

Now, I don’t expect 40,000 protesters to grasp this distinction. However, members of the press should know better. Even if one accepts the (dubious) premise that the Boston free speech rally was all some charade to spew hate, the use of scare quotes implies that this kind of free speech is somehow less worthy of protection. In a stroke of irony, the media is revealing a disdain for the very right that protects them.

So please, stop with the scare quotes. It’s all free speech, even the ugly stuff.