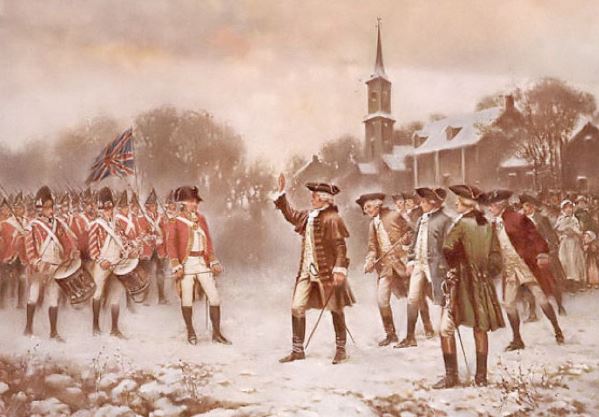 Americans today tend to look at the War of Independence in terms of patriotic slogans.

“No Taxation without Representation!”

“I regret that I have but one life to give for my country.”

“Give me liberty or give me death.”

Through this lens, the Revolutionary War was an inevitable conflict brought about by punitive British taxes (without representation!) that prompted a motley band of patriots to dump a bunch of tea into Boston Harbor.

Taxation without representation and the Boston Tea Party were of course key elements of the Revolutionary War. But this simplistic view overlooks a richer and more interesting story.

Whether or not a historic event of this magnitude is “inevitable” depends largely on one’s worldview and historical perspective, but we know that most of the men who led the rebellion did not view war with the world’s most powerful empire as a foregone conclusion. Indeed, most of them were shocked and appalled when open conflict erupted at Lexington and Concord in April 1775.

“Yesterday produced a scene the most shocking New England ever beheld,” John Adams wrote a day after the battle. “When I reflect and consider that the fight was between whose parents but a few generations ago were brothers, I shudder at the thought, and there’s no knowing where our calamities will end.”

While taxation was one of the causes that fueled discord between the colonials and the Crown, other grievances also loomed large. Here are four of them:

There was a fundamental disagreement between the Crown and colonials regarding the rule of law. Colonials recognized they were subjects of King George III, but they believed their charters, passed in assemblies and approved by the Crown, were the law of the land. They did not believe the king had authority to simply repeal approved laws or pass new ones without their consent.

The Crown felt otherwise. These opposing views on colonial rights versus Crown prerogatives were on display when Ben Franklin met with the Earl of Granville while in London years before the outbreak of the conflict.

“You Americans have wrong ideas on the Nature of your Constitution,” Granville told Franklin in 1757. “The King in Council is legislator for the Colonies, and when His Majesty’s instructions come there, they are the law the land.”

Franklin, whose sympathies with the Crown probably exceeded those any of America’s Founding Fathers, was baffled by this explanation.

“I told his Lordship this was new doctrine to me. I had always understood from our charters that our laws were to be made by our Assemblies, to be presented indeed to the king for his royal assent, but that being once given the king could not repeal or alter them.

And as the Assemblies could not make permanent laws without his assent, so neither could he make a law for them without theirs. He assured me I was totally mistaken.”

These diametrically opposing views on Crown authority and the rights of colonists made reconciliation between the king and his subjects terribly difficult.

2. Disputed Claims on the Continent

The Royal Proclamation of 1763, issued by George III on Oct. 7, forbade colonists from settling west of the Appalachian Mountains. This meant settlements previously approved by the Crown were now unlawful, even though many of these lands were already occupied by settlers, many of whom had fought for the British during the French and Indian War.

The proclamation, writes historian Paul Johnson, “was anathema to the colonies—it destroyed their future, at a stroke.” He continued:

“The Great Proclamation in short was not a practical document. It enraged and frightened the colonists without being enforceable… . The Proclamation was one of Britain’s cardinal errors. Just at the moment when the expulsion of the French had entirely removed American dependence on British military power…the men in London were proposing to replace the French by the Indians and deny the colonies access. It made no sense, and it looked like a deliberate insult to American sensibilities.”

Colonists were further infuriated by passage of the Quebec Act (1774), which nullified many colonial claims by extending the boundaries of Quebec to the Ohio River on the south and to the Mississippi on the west.

Popular history has often overlooked the fact that in the decades leading up to the Revolution, Britain’s imperial impulses resulted in several clumsy attempts at social engineering that no doubt dampened colonial support of the Crown. Perhaps first among these was the Great Upheaval (also known as the Expulsion of the Acadians), which involved the Crown expelling some 14,000 French-speaking settlers (Acadians) from Nova Scotia.

The dubious policy, implemented out of fear of a French uprising, was a disaster for everyone—not just for the Acadians ripped from their homes. The Crown’s attempt to resettle the Acadians, who were Catholic, in the Thirteen Colonies was met with outrage and suspicion. The Crown eventually gave way and began shipping Acadians to Britain and France. But images of Red Coats forcing families onto ships undoubtedly made a dark impression on colonialists. The policy was both senseless and an abuse of power, a dangerous omen for an imperial power attempting to govern a fiercely independent people.

4. Religious Tensions and Resentment of Canada

It’s easy to forget that the 30 Years War, which involved Catholics and Protestants destroying each other in Europe, concluded barely a century after the start of the French and Indian War. The conclusion of the latter resulted in a continent that was, geographically speaking, religiously divided, with Catholics in Canada to the north and the Thirteen Colonies predominately Protestant to the south.

This religious tension was not especially conspicuous until passage of the aforementioned Quebec Act. The legislation, which put Canada on a path toward self-government, was designed to keep the British subjects to the North loyal to the Crown, Johnson notes. In this it succeeded—but it also created a sort of paranoia in the colonies.

Passed at roughly the same time colonials were fuming over the Intolerable Acts, it caused fevered speculation in colonists that a Catholic conspiracy was afoot. Even the distinguished John Adams fretted that the Crown was seeking to bring back “the hated despotism of the Stuarts” (who were Catholic).