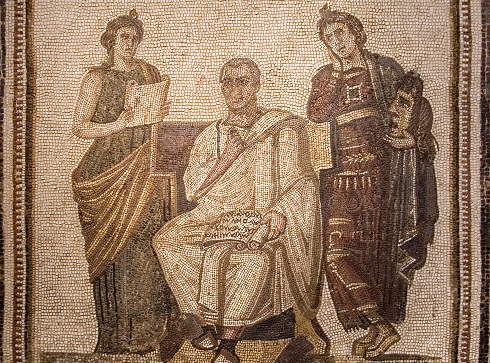 Many educated people – though perhaps not enough – know that it was medieval monks who preserved classical culture. Between their daily offices, the monks huddled in their cells by candlelight to copy the great cultural artifacts of Western civilization. But why did they preserve works that had been produced by, and often reflected, the pagan ethos of ancient Rome?

In an essay for the August issue of First Things, professor Rémi Brague answers questions such as: What is culture? How does Christianity sustain, preserve, or facilitate culture? And why did the monks preserve the Roman equivalent of the trashy novel?

Virgil could be read as a prophet of sorts because of the long-held misinterpretation of his Fourth Eclogue, and Seneca was believed to have had a correspondence with St. Paul. But why did the monks keep the classical historians, or the bawdy Catullus, or the lewd Ovid, let alone Lucretius, the Epicurean atheist?

The question had been raised in a lecture delivered by Pope Benedict XVI on “The Roots of European Culture.” Brague, who spoke at the Acton Institute’s “Reclaiming the West” conference in London, said the reason has to do with the Christians’ unique conception of culture – one which he contrasts to ancient Hellenic, Jewish, Roman, or Muslim cultures.

While modern scholars show their gratitude (however begrudgingly) for the monks’ having saved Western classics, the monastics were motivated by a different value: their high conception of the value of work:

They never imagined their task to be “cultural.” Pope Benedict reminds us of what is well known, but not always understood in its depth: Monks worked and prayed. Their work was grounded in a positive view of labor. This stemmed from a vision of the world as created by a good God, hence as basically good and a fitting arena for human endeavor.

The monks’ twin tasks of prayer and work, ora et labora, kept Western culture alive. But can Western culture preserve itself without the cult, the worship and prayer that motivated them? Brague asks:

Are we still able to praise? Are we still conscious of possessing something to be thankful for? Do we still have access to somebody to whom we can express our thanks? What becomes of culture without the praiseworthy? Can the worthy (the domain of so-called “values”) still be worthwhile without a metaphysical ground?

Both his questions, and his answers, reward careful reading. You can read the full article here.

This was originally published on blog.acton.org. Read the article here.

Image Credit:
A mosaic of the poet Virgil holding the Aeneid, flanked by the muses of history and tragedy, preserved in Bardo Museum in Tunis. Public domain.