The Oddest Fact about Each U.S. President 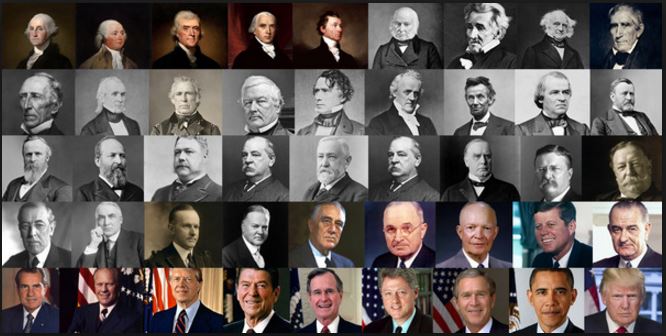 #1. George Washington was a wealthy man, with a fortune in today’s money of an estimated $500 million. But at the time of his inauguration, he didn’t have enough money to get there so he had to borrow $600 from his neighbor.

#2. John Adams was a horrible dancer. As a result, he forced his son to take dance lessons so as to help him avoid a similar fate.

#3. Thomas Jefferson believed that soaking your feet in a bucket of cold water would keep you from catching the common cold, so he bathed them daily.

#4. James Madison was once arrested for taking a carriage ride in Vermont on a Sunday, which was against state law. Thomas Jefferson, who was with him, was also arrested.

#5. James Monroe had a bit of a temper. Once, while wielding a pair of fire tongs, he chased the Secretary of the Treasury out of the White House.

#6. John Quincy Adams liked to skinny-dip in the Potomac. One time, a female reporter sat on his clothes until he agreed to an interview with her.

#7. Andrew Jackson was involved in over 100 duels. He mostly did this to defend the honor of his wife, Rachel, who was divorced before he married her.

#8. In 1836, Congressman Davy Crockett accused Martin Van Buren of wearing women’s underwear. Whether the smear was just that – a campaign smear – or a true fact is still to be determined.

#9. William Harrison holds the record for the longest inauguration speech in history. It was 8,578 words long and one hour and 40 minutes. Unfortunately, he gave the speech during bad weather and a month later, he died from pneumonia, making his the shortest presidency on record at only 33 days.

#10. John Tyler had 15 children with two wives. This is the most children of any president. He was 70 when his last child, Pearl, was born.

#11. James Polk, a reserved Methodist, did not dance or drink alcohol. Thus, when he and his wife arrived at the inaugural ball, the music and dancing were stopped until the first couple departed.

#12. Zachary Taylor ate a bunch of cherries at a 4th of July picnic and washed them down with iced milk. He died a few days later. Bacteria is suspected to have been prevalent in the cherries or the milk, thus causing his death.

#13. Millard Fillmore married his teacher, Abigail. He was 19 years-old and she was 21 when she taught him at the New Hope Academy.

#14. Franklin Pierce lost both of his sons at a young age. The second one lost his balance and fell out of a railroad car – while his parents looked on helplessly.

#15. James Buchanan is the only bachelor president in history. Many suspect that he was gay because of his close relationship with Senator William R. King (AL). They even lived together despite being able to afford to live on their own, and they were given the nicknames “Miss Nancy and Aunt Fancy” as well as “Mr. Buchanan and his wife.”

#16. Before Abraham Lincoln was President, he was a licensed bartender. He was the part owner of the Berry and Lincoln saloon in Springfield, Illinois.

#17. Andrew Johnson was noticeably drunk during his inauguration ceremony after drinking too much whiskey beforehand. He was unable to finish swearing in Senators because he was too intoxicated.

#18. Ulysses Grant got a speeding ticket on a horse. He was charged a $20 fine for riding his horse too fast down a Washington street.

#19. As a young man, Rutherford Hayes had lyssophobia, which is the fear of going insane.

#20. James Garfield would juggle Indian (Native American) clubs to get his exercise in.

#21. Chester Arthur was known for his impeccable attire, and was given the nickname “Elegant Arthur.” It is rumored that he owned 80 pairs of pants.

#22 & #24. Cleveland was the legal guardian to his former law partner’s daughter. She was 11 years old when she came to live with him and he married her 10 years later at the White House.

#23. Benjamin Harrison was the first president to install electricity in the White House, but he was afraid of being electrocuted when turning it on and off, he and his wife would sleep with the lights on in their bedroom.

#25. William McKinley was known to wear a red carnation on his lapel as a good luck charm. Interestingly enough, he was shot after he removed the flower and gave it to a little girl.

#26. Theodore Roosevelt was blinded in one eye after he was boxed in the head during a match.

#27. William Taft was so large that he once got himself stuck in his bathtub, and he had to call for his staffers to help him.

#28. The only president to hold a Ph.D. to date, Woodrow Wilson, did not learn to read until he was 11 years old.

#29. In a single hand of poker, Warren Harding managed to lose all of the White House china.

#30. During his odd morning routine, Calvin Coolidge would force staffers to rub Vaseline on his head while he ate breakfast in bed.

#31. Herbert Hoover told his White House servants that he would fire them if they did not hide and stay out of sight when he walked by them.

#32. Franklin Roosevelt did not have a name for the first seven weeks of his life.

#33. Harry Truman was a dues-paying member of the Ku Klux Klan for about two years in the 1920s.

#34. Dwight Eisenhower, like George W. Bush, took up painting after he retired from the White House. He supposedly commented to a reporter, “They would have burned this **** a long time ago if I weren’t the president of the United States.”

#35. John Kennedy, one month before he died, created a fake James Bond movie in which he was assassinated. He made his wife play herself in the movie and the Secret Service agents play themselves as well.

#36. Lyndon Johnson wanted to be both powerful and time efficient. He would often take White House staffers into the bathroom with him and make them continue meetings, notes, and conversations.

#37. Richard Nixon’s Secret Service agents saw the former president eat a dog biscuit as he was feeding them to his dog one day.

#38. Frat boy, football player, and Navy sailor Gerald Ford was featured on the cover of Cosmopolitan in 1942.

#39. In 1969, before he became president, Jimmy Carter filed a report stating that he had seen a large glowing object in the sky. Apparently, even U.S. presidents can believe in UFOs.

#40. In the 1940s, Ronald Reagan won a prize which consisted of the opportunity to pose nearly nude for an art class. The competition? The University of California’s “Most Nearly Perfect Male Figure Award.”

#41. George H. W. Bush has skydived eight times, with the most recent jump being three years ago on his 90th birthday.

#42. Before he became president, Bill Clinton’s wife told the press that they had a hard time keeping their marriage together because he did not like chocolate even though she did.

#44. When Barack Obama lived in Indonesia, he owned a pet ape which he named Tata.

#45. Donald Trump is a germophobe. In 1997, in his book The Art of the Comeback, he wrote, ““One of the curses of American society is the simple act of shaking hands, and the more successful and famous one becomes the worse this terrible custom seems to get. I happen to be a clean hands freak. I feel much better after I thoroughly wash my hands, which I do as much as possible.”