Communist Clubs Are Sprouting Up in U.S. High Schools Again 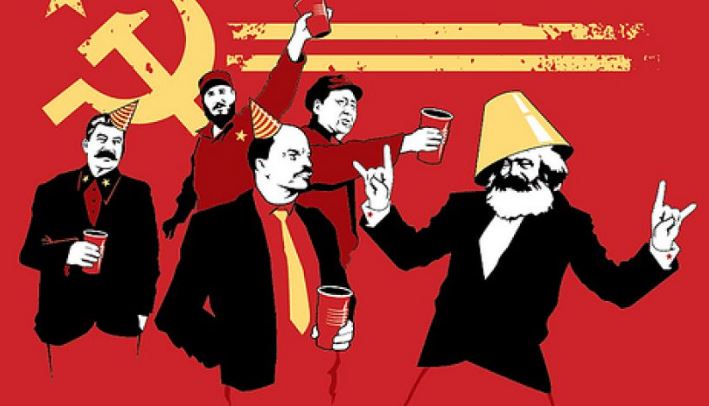 Students at Edina High School in Minnesota say they received an unusual invitation over the loudspeakers on a cold January morning earlier this year.

The announcement was not related to a school play, a pledge drive, or a bake sale. Rather, it was an invitation to join the school’s newly-created student-led group: the Young Marxists Club.

Officials at Edina Public Schools confirmed the existence of the club.

“We did have a Young Marxists Club last year,” said Susan Brott, Director of Communications & Community Engagement at Edina Public Schools. “I think that was the first year they had it.”

School officials said all clubs are student generated and led by faculty advisors. Clubs are not automatically approved. There is an application process, as well protocols and guidelines that must be followed upon creation of a club. Symbols deemed “inappropriate” by school officials are not permitted, for example.

“So long as everyone is welcome to join, clubs are generally approved,” Brott said.

In some ways it’s fitting that a Communist club should sprout up in this affluent Minnesota school district. The Gopher State was the birthplace of Gus Hall (1910-2000), the former chairman of the Communist Party who four times ran for president of the United States as his party’s nominee, peaking in 1976 with 58,709 votes (0.07 percent of the total).

But Minnesota is not the only place where Communist youth clubs are surfacing.

Officials at Norman High School in Oklahoma declined to confirm or deny the existence of a student Communist club. However, a Twitter account (presumably created by a student) claims the NHS Young Marxists “meet every Thursday in room 103.” A Young Marxists group also is listed on the school’s Wikipedia page.

Harvey Klehr, a professor of politics and history at Emory University who has written several books on Communism, said Marxist youth movements in the U.S. are not new, though they are few and far between.

“Communism at its height in 1939 had less than 100,000 members,” said Klehr. “There might have been ten or fifteen thousand in youth movements. That’s not exactly a mass movement in a nation the size of U.S.”

this kid knows what’s up! pic.twitter.com/MpwH4eigcO

Though it was rare for communist clubs to form in schools even during the heyday of Communism in America, it was not unheard of, he said, particularly in socialist-friendly states such as New York and Minnesota.

Parents speaking to Intellectual Takeout on the condition of anonymity expressed frustration that schools would facilitate the formation of student clubs around an ideology that had killed between 85 and 100 million people.

One possible reason schools and students might be inclined to form or allow such groups is that Americans—particularly millennials—are largely ignorant of Communism’s bloody history.

A recent YouGov study found that only 33 percent of millennials are familiar with Lenin—and one-quarter of them view him favorably. The same poll found that one-third of millennials believe the George W. Bush regime killed more people than that of Joseph Stalin.

“This generation essentially has no personal experience with communist or socialist societies,” Klehr said. “It’s no surprise they have little understanding of what these socialist societies are like considering our failure to teach its history.”

Such ignorance could explain why schools and students would condemn one ideology that killed millions of people while embracing another.

Recent polling suggests that about one-third of America’s 18- to 29-year-olds have a favorable view of socialism. However, the socialism and communism of today’s youth looks a bit different than that which was embraced by their grandfathers.

Social media posts from various accounts show relatively little emphasis on economic issues. Gender and race are the primary themes, suggesting that traditional Marxism may have given way to cultural Marxism.

Incredible read. “It is not hyperbole to say that white supremacy is resting at the heart of American politics.” https://t.co/pzP2qRLdz3

There may be a reason for that, Klehr said.

“Economic Marxism was a failure; even most Marxists admit that,” he said. “So today it’s awfully hard to have a Marxism based on economics.”