Charlie Gard’s Parents Have the Right to Try New Treatment 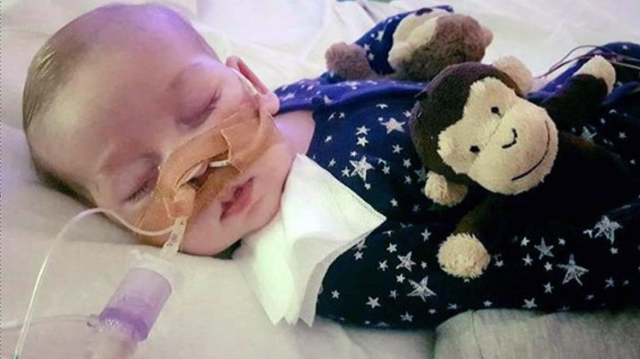 A central issue in the controversy over withdrawal of treatment from British baby Charlie Gard is that of parental rights. Whether to continue life support for 11-month-old Charlie while his parents pursue alternative treatment in the US (or, since a recent offer, Italy) or not, is a question already decided in the negative by the Great Ormond Street Hospital where, because of a rare genetic disorder, he has spent most of his short life.

In the United States the case of Baby Simon Crosier in 2010 revealed that hospitals could make decisions about the “futility” of life sustaining treatments without informing parents, let alone gaining their consent. As a result, a Bill called Simon’s Law, under which parents must be informed of such decisions and have the right to refuse, has been introduced into two state legislatures and was passed by Kansas in April.

But under British law, apparently, parents have the right to make decisions about the treatment of their children unless the treatment is not in a child’s “best interests”. When Charlie’s parents said they wanted to take their son to the US for experimental treatment, the hospital refused, saying that it would not be in his best interests. When the parents insisted on their plan, the hospital went to the courts for a decision, and Britain’s Supreme Court upheld the hospital’s view, allowing it to remove Baby Charlie’s ventilation and feeding.

On June 30 Chris Gard and Connie Yates lost a further appeal to the European Court of Human Rights.

Yesterday, however, the case went back to Britain’s High Court at the request of the hospital, after it received a letter from seven doctors citing new evidence and urging the hospital to reconsider the possibility of treatment. The judge (the same one as for the original hearing) has given Charlie’s parents 48 hours in which to present the new evidence.

Thirty-five years ago I had to fight for the right to treatment for my infant daughter, Karen, who had Down Syndrome and a correctable heart defect. Tragically, Karen died of complications of pneumonia when she was just 5 ½ months old and just before her scheduled open-heart surgery. Today, the legal right to live for children with disabilities and their parents continue to be under attack as with the cases of Simon Crosier and Charlie Gard.

An experimental treatment could also help others

Baby Charlie has a rare genetic disorder affecting his muscles and brain that has caused brain damage, seizures and prevents him from breathing on his own. A neurologist in the US has suggested an experimental nucleoside treatment that might, in theory, offer some benefit although the treatment has not been tried before in a situation like Baby Charlie’s.

On Facebook, Charlie’s parents said that they were “heartbroken” and aghast that the hospital would not even allow them to take their son home to die.

During the months that the couple have been fighting for the right to take their son to the US try this experimental treatment, they have raised $1.7 million through crowdfunding media to cover expenses.

The Charlie Gard case has caused enormous conflict among ethicists, lawyers and even religious leaders across the world as well as the general public.

However, Baby Charlie and his parents gained support from two important people: Pope Francis and US President Donald J. Trump.

At first, a Vatican official issued a statement on Baby Charlie that “We must do what advances the health of the patient, but we must also accept the limits of medicine and, as stated in paragraph 65 of the Encyclical Evangelium Vitae, avoid aggressive medical procedures that are disproportionate to any expected results or excessively burdensome to the patient or the family.

But a few days later and after much criticism of the first statement, Pope Francis expressed hope that the desire of 10-month-old Charlie Gard’s parents “to accompany and care for their own child to the end” will be respected. (Emphasis added)

Then, after a July 3, 2017 offer by President Trump to help, an unnamed US hospital came forward to offer free treatment to Baby Charlie.

If Charlie receives this treatment and it does work like the Dr in America thinks, it won’t be just Charlie’s life that has been saved, it will be many more children in the future, who are born with this horrible disease and it will open up other trials on other mitochondrial depletion syndrome’s.

Over my decades years of nursing experience, I have seen people decide to try experimental treatments because they hoped for a cure, improvement or at least to help doctors learn more that may help someone else later.

Sometimes the treatments worked and sometimes they didn’t but after talking with these patients (or parents), I could not help but admire their love, courage, faith and determination.

May God bless Baby Charlie, Baby Simon and their parents.

Nancy Valko is a registered nurse and a spokesperson for the National Association of Prolife Nurses (www.nursesforlife.org) in the United States. After working in critical care, hospice, home health, oncology, dialysis and other specialties for 45 years, she is currently working as a legal nurse consultant (www.valkogroupalnc.com) and volunteer. This article is adapted from her blog post: 35 Years after Baby Doe Continued: The Simon Crosier and Charlie Gard Cases with permission.