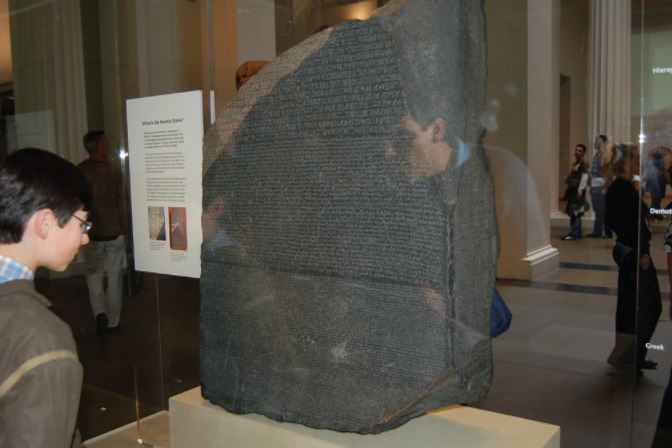 Discovered on July 19 in 1799 by the French, the Rosetta Stone proved to be one of the most important historical discoveries in the history of, well… history. As the most popular artifact in the British Museum, it sees most of the Museum’s 6.8 million visitors each year. Below are eight facts about the now famous finding.

1. The Rosetta Stone, written in 196 B.C. during the Ptolemaic Period, has its name because it was discovered in a temple near el-Rashid, which translates from Arabic to English as “Rosetta.” The town is about 35 miles northeast of Alexandria.

2. The Rosetta Stone was discovered by the French during the Napoleonic Wars. Though the main goal of France was to colonize Egypt, Napoleon knew that the country was rich with history. Thus, he personally ordered historians and scientists to go to Egypt with the military to study the county. Napoleon also ordered all military personnel to pay special attention to historical valuables, which is why Pierre-Francoise Bouchard, a French engineer, took a second look at the stone when he found it.

4. In 1801, the British defeated the French at Alexandria and took many of the artifacts the French had found home with them. Thus, since 1802, the Rosetta Stone has been housed in England. It currently resides in the British Museum. During World War I, it was stored underground in a Postal Tube Railway in Britain to protect it from bombs. It has moved out of the country only once when it was housed in France for one month over the 150th anniversary of its translation in the Louvre de Pairs. In 2003, Egypt asked that the Rosetta Stone be moved back to its country of origin, but the British Museum denied the request and gave Egypt a replica instead.

5. Even though the Rosetta Stone was discovered in 1799, the hieroglyphic code was not cracked until 1824. The Greek and the common Egyptian were easy to translate, but the hieroglyphics were more difficult since translators could not decipher whether the hieroglyphs were symbolic or phonetic. Jean-Francois Champollion finally found them to be phonetic after deciphering non-Egyptian names (Cleopatra, for example). The stone contained 54 lines of Greek, 32 lines of the Egyptian demotic, and only a scant 14 lines of hieroglyphics, but they took 25 years to be translated. Even though the three languages each convey the same message, there are slight variations between them so there is no unambiguous English translation.

6. On the Rosetta Stone is written a decree from King Ptolemy V, known as the Memphis Decree. Other copies of this decree have been found in addition to its text on the Rosetta Stone. Ptolemy V became king when he was five years old after his parents were murdered by their court, and the decree hails the new king in hopes of building support for his reign and for the country. It is essentially ancient propaganda. An English translation of the Greek is available through Fordham University.

7. The Rosetta Stone spent almost 14 centuries trapped inside of an Ottoman fortress. The French excavated it from the remains of that temple in 1799. Prior, it is suspected that it was placed outside of an Egyptian temple so that it would be easily visible.

8. Physically, the stone is about three-and-a-half feet long, two-and-a-half-feet wide, and one foot thick. The rock itself is a slab of pink and grey granodiorite that weighs 1700 pounds. The Rosetta Stone that we have today is only a fragment of the original stone, which is thought to have been about six-and-a-half feet tall.