Without the State, Who Will Handcuff Teens for Selling Water Bottles? 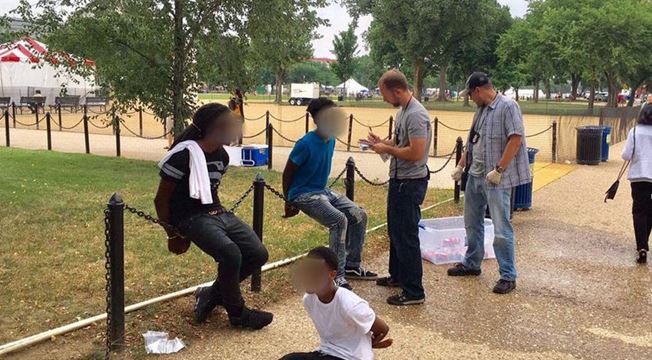 Tourists taking a stroll around the national monuments this past weekend might have wondered what horrible crime was committed by a group of black teenagers sitting handcuffed and detained on the sidewalk. But while imaginations may run wild, the truth of the matter is extremely tame; the only offense these teens were guilty of was selling bottled water without first asking the government for permission.

If this seems like an overreaction on the part of law enforcement, that is because it absolutely is. However, this over-enforcement has become all too common when it comes to youthful attempts at entrepreneurship. During the hot summer months when school-aged children are liberated from their oppressive classrooms, many have discovered the wonders of capitalism only to be shut down by local authorities.

Just a week prior to this appalling scene, a similar instance occurred in the neighboring city of Baltimore, Maryland. A group of young black children, still donning their school uniforms from earlier in the day, were selling snow cones in their community, until police shut them down for not obtaining the proper permits. While these young children were fortunate enough to not have been placed in handcuffs, this national crackdown on child-run businesses is having a far worse impact on the communities where the self-sustaining entrepreneurial spirit is needed the most.

In the District of Columbia, 26 percent of its black residents are below the national poverty line. Equally dismal, for those black residents living in Baltimore, Maryland, 27.6 percent are considered to be living below the the poverty line. And yet, rather than encouraging these communities to become self-sufficient, the state is penalizing those who have the most to gain from entrepreneurial endeavors.

Whether it’s selling lemonade on a neighborhood street corner or, like the young men detained in DC this weekend, selling cold bottles of water to overheated tourists, local law enforcement has cracked down and and penalized minors who would dare start a business without first obtaining a government license. However, in other areas, specifically more affluent communities where the level of those living below the poverty line are not quite as high as Baltimore and Washington, DC, you will rarely find young entrepreneurs placed in handcuffs for making a few extra dollars.

Perhaps, this is what makes the scene on the national mall this weekend so horrific. Officers on the scene claimed that this extreme measure taken against these teens was done in order to ensure police safety, exemplifying yet again how members of lower socioeconomic communities are constantly facing state obstacles.

Not only are these licensing laws not doing anything substantial to actually protect consumers, they are disproportionately impacting the most economically vulnerable communities in negative ways. And as a result, the vicious cycle of poverty becomes incredibly difficult to escape.

For most of these young entrepreneurs, it never once occurred to them that they would even need such a thing before engaging in the economy. And who can blame them? In addition to these permit requirements being absolutely meaningless, the public school system has done nothing to foster an environment where young Americans are encouraged to go out be active participants in the economy.

Compulsory education has mandated that adolescents must sit in a desk for six to eight hours a day, caged away from the rest of society and isolated from critical thought or practical life skills. Instead of teaching students precepts of the free market and allowing them to actually experience capitalism in action, they are kept in a state of dependency until the day they turn 18. Then, after this magical government-sanctioned right of passage has occurred, we throw them out into the real world and expect them to know how to find a job and make money.

Truthfully, it is amazing that these young people even want to get a job and make money after the system has crushed their spirits for 13 years. But in cities with higher levels of poverty, this becomes an even greater problem, especially when college is not a desirable or feasible option. The ability to create a business or learn a practical skill that can be used to cater to market demand is profitable for those of all socioeconomic backgrounds, but especially those eager to break the cycle of poverty.

But for those in more economically vulnerable communities, the system disproportionately impacts their ability to succeed as independent adults. Instead of encouraging their entrepreneurial spirit, we teach them useless skills and prevent them from opting out of school in favor of apprenticeships or other specialized courses of learning.

This was unfortunately exemplified this weekend in Washington DC. the boys who were detained were merely trying to be entrepreneurial. Understanding that tourist season and the summer heat create an enormous demand for cold water, these teens spent their weekend creating value. They weren’t out getting into trouble or committing offenses, they were trying to be financially self-sufficient and instead found themselves handcuffed like common criminals.

The market is a liberator of all people, regardless of their circumstances. It exists to help all those who are willing to utilize it well. When individuals of all ages are allowed to take full advantage of everything free market capitalism has to offer, they are able to better their circumstances, innovate their lives, and rise out of their situations.

When the state is continually building and reinforcing barriers that are put in the way of those who are already facing poverty and other unfortunate circumstances, it keeps them from achieving their full potential and becoming successful individuals. If the state is serious about trying to help those from the most vulnerable communities, the simple solution would be to stay out of the way.

Fortunately for the DC teens, the media they garnered as a result of being handcuffed caught the attention of Raymond Bell. Several years, Bell started the H.O.P.E (Helping Other People Excel) Project whose mission is “an information technology (“I.T.”) training program dedicated to providing technical training and development for young adults.”

After reaching out to two of the four young men in the picture, Bell was able to get them involved in his organization and they will soon be starting their new summer jobs in the tech industry. “I’m an entrepreneur myself,” Bell said, “and I love seeing young people having an interest in working for themselves.” Bell says he plans on reaching out to the other boys as well, but already, his organization has done more to help than the government ever could.

This FEE article was republished with permission. Read the original article.