This is What Happens When Education Loses Its Purpose 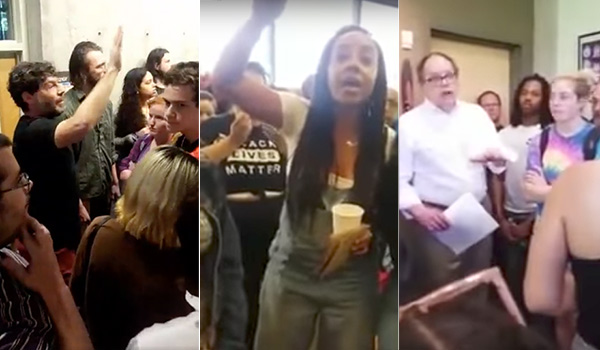 The student protesters at Evergreen State College in Washington are becoming more unreasonable.

In a May 24 meeting with the school’s seemingly spineless president, George Bridges, the protestors demanded (among other things) that he excuse them from their end-of-the-term homework, and that he provide them a gumbo (!) potluck.

Yesterday, an article by my colleague Jon Miltimore described a more recent incident where the Evergreen students demanded that Bridges be escorted to the bathroom, presumably so that he couldn’t escape their haranguing.

These are not the actions of a focused movement passionate about its espoused ideals. Rather, as anyone with half a brain can see, they’re the exploits of disrespectful children who are toying with perceptibly weak and enabling superiors.

As a parent or a teacher, to maintain order with the youth under your charge you need two things: discipline and purpose.

Certainly the colleges have punted on the first of these requirements. Students have tested the boundaries and found that they can get away with petty and violent disruptions of the academic life of campuses with very little in the way of punitive consequences. Just witness the most recent slap on the wrist given to the Middlebury College protesters, whose actions left one professor hospitalized with a concussion.

However, discipline will only get one so far. Disciplinary actions need to be backed up with a deeper purpose that has the buy-in of all parties involved.

But America’s institutions of higher education have lost sense of a greater, universal purpose behind education and human life. The West has substituted its metaphysical foundations for relativism, individualism, and pragmatism. College education has now become just another hoop to jump through in the pursuit of self-interest that primarily aims at either getting a desired job (in the case of students), or keeping a desired job (in the case of professors).

This vision of education—or lack thereof—is being found wanting by a number of students. Many are awakening to the fact that getting a four-year degree is no guarantee of a place on the higher rungs of the economic ladder. It’s even less of a guarantee at a school like Evergreen State, which has a 98% acceptance rate.

Other students are becoming aware that the administration and professors of their colleges possess no meaningful, guiding philosophy into which they can initiate them… that they have no answers to the great existential questions… that they are in many cases foolish people who, despite their age, are still clueless about life.

And so, predictably, the students rebel. And so they use the silly postmodern discourse that they’re been fed by their professors against them. As college professor Anthony Esolen recently wrote, “The students hold the hammer, and they know it.”