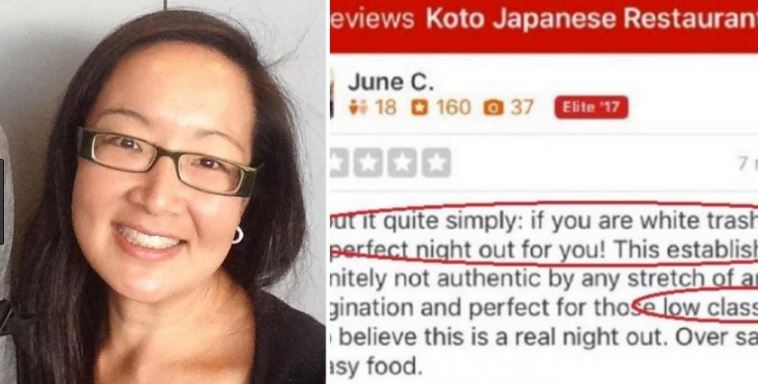 “As the dean of Yale University’s Pierson College, June Chu is responsible for advising about 500 students and fostering ‘a familiar, comfortable living environment’ in keeping with the university’s residential college system.

Chu’s biography states she has a PhD in social psychology and touts a long career in which she has ‘sought to help students not only succeed academically but to support their holistic academic experience and multifaceted identities.’

But the administrator’s seemingly supportive and culturally sensitive persona has been marred since Yale students came across her Yelp account. Images of Chu’s controversial Yelp reviews began circulating among Pierson students in recent months and were published by the Yale Daily News on Saturday.”

Here is a sample of Chu’s reviews (you can read them in their entirety here):

Chu, a champion of cultural sensitivity, has apologized for her remarks, saying they were “wrong” and “insensitive in matters related to class and race.”

The racial overtones of Chu’s posts have garnered the most attention. Less attention has been paid to the sneering elitism in the reviews.

“White trash” is a derogatory thing to say, but it’s a phrase we’ve all heard before. But who complains that the uncultured masses simply don’t know the difference between genuine mochi and “ice cream mochi”?  Who refers to people assisting them as “barely educated morons”? Who complains about having to wait in line “with all the other idiots” to see a movie?

Snobs, that’s who. And the Ivy League is full of them.

Now, I’m not trying to gin of class resentment here or suggest that all Ivy Leaguers are Judge Smails. On the contrary, over the years I’ve become acquainted with people who attended Ivy League institutions, and they have been gracious people almost without exception (and, to my surprise, even bright).

Most of these folks, however, would be the first to admit that there is a prevalence of ISTEE disease (I’m Smarter Than Everyone Else) in these schools. Since homo sapiens are not a naturally humble species, this often evolves into I’m Better Than Everyone Else disease. Chu clearly was infected with both (and with a base meanness, too).

This wouldn’t be such a problem—the world is full of snobs who think they are better and smarter than everyone else—except for one small thing: The philosophy that dominates the Ivy League is one that involves using force or the threat of force to take people’s property and redistribute it more evenly to create a blissful paradise here on earth.

What would happen if the intellectual and moral arrogance of the Ivy League was combined with such a philosophy? Perhaps it would look something like this.