Why the Left Refuses to Talk About Venezuela 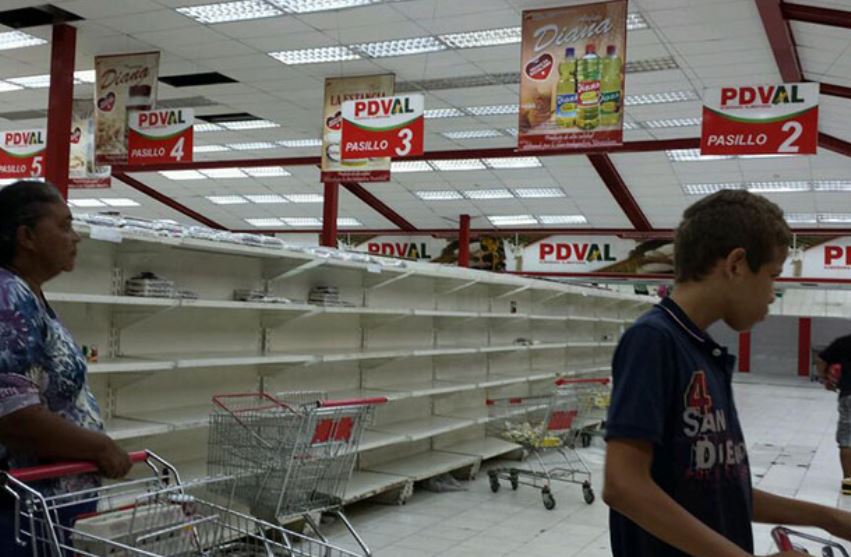 During the 2016 presidential election, Bernie Sanders refused to answer questions about Venezuela during an interview with Univision. He claimed to not want to talk about it because he’s “focused on my campaign.” Many suggested a more plausible reason: Venezuela’s present economy is an example of what happens when a state implements Bernie Sanders-style social democracy.

Similarly, Pope Francis — who has taken the time to denounce pro-market ideologies for allegedly driving millions into poverty — seems uninterested in talking about the untrammeled impoverishment of Venezuela in recent years. Samuel Gregg writes in yesterday’s Catholic World Report:

Pope Francis isn’t known as someone who holds back in the face of what he regards as gross injustices. On issues like refugees, immigration, poverty and the environment, Francis speaks forcibly and uses vivid language in doing so.

Yet despite the daily violence being inflicted on protestors in Venezuela, a steadily increasing death-toll, an explosion of crime, rampant corruption, galloping inflation, the naked politicization of the judiciary, and the disappearance of basic food and medical supplies, the first Latin American pope’s comments about the crisis tearing apart an overwhelming Catholic Latin American country have been curiously restrained.

This virtual silence comes in spite of the fact that the Catholic bishops who actually live in Venezuela have denounced the regime as yet another illustration of the “utter failure” of “socialism in every country in which this regime has been installed.”

Thus, for many Venezuelans, the question is: “Where is Pope Francis?”

As with Sanders, it may very well be that Francis has nothing to say about Venezuela precisely because the Venezuelan regime has pursued exactly the sorts of policies favored by Bernie Sanders, Pope Francis, and the usual opponents of market economics.

And, as Venezuelan president Nicolas Maduro has helpfully explained, “There are two models, the neoliberal model which destroys everything, and the Chavista model which is centered around people.”

The Chavista model is simply a mixture of social democracy and environmentalism which is easily recognizable as the Venezuelan version of the hard-left ideology espoused by a great many global political elites both in the United States and Europe. Neoliberalism, on the other hand — as I’ve noted before — is a vague term that most of the time really just means a system of relatively free markets and moderate laissez-faire.

Indeed, no other regimes in the world, save Cuba and North Korea, have been as explicit in fighting the alleged menace that is neoliberalism.

For this reason, as Venezuela descends into chaos, we are hearing a deafening silence from most of the left, as even some principled leftists have noticed.

In an article at Counterpunch, for example, Pedro Lange-Churion points out:

Venezuela was news while it was good news and while Chávez could be used as a banner for the left and his antics provided comic relief. But as soon as the country began to spiral towards ruination and Chavismo began to resemble another Latin American authoritarian regime, better to turn a blind eye.

Nevertheless, as a dedicated leftist, Lange-Chrion unfortunately still mistakenly thinks that the Venezuelan problem is political and not economic. For him, it’s merely an unfortunate coincidence that the implementation of the Chavismo economic agenda just happened to coincide with the destruction of the nation’s political and economic institutions.

But here’s the thing: it’s not a coincidence.

In fact, it’s a textbook case of a country electing a leftwing populist who undoes years of pro-market reforms, and ends up destroying the economy.

This has been going on for decades in Latin America where, as explained by Rudiger Dornbusch and Sebastián Edwards, the cycle repeats itself again and again.

It’s happened in Argentina and in Brazil most recently, and it goes something like this: first, a relatively neoliberal regime comes to power, moderately reduces government spending, somewhat restrains government power, and ushers in a period of growth. But, even with growth, middle-income countries like those of Latin America remain poor compared to the rich countries of the world, and large inequalities remain. Then, populist social democrats convince the voters that if only the regime would redistribute more wealth, punish greedy capitalists, and regulate markets to make them more “humane,” then everyone would get richer even faster. And even better, the evil capitalists would be punished for exploiting the poor. Eventually, the economy collapses under the weight of the new social democratic regime, and a neoliberal regime is again elected to clean up the mess.

Venezuela is in the midst of this cycle right now. After decades of relatively restrained government intervention, Venezuela became one of the wealthiest nations in Latin America. During the most recent twenty years, though, the Chavistas were able to take that wealth and redistristribute it, regulate it, and expropriate it for the sake of “equality” and undermining capitalist evil. But, you can only redistribute, tax, regulate, and expropriate so much before the productive classes give up and the wealth runs out.

To the leftwing mind, the explosion of poverty that results can’t possibly be the result of bad economic policy. After all, the Chavismo regime got everything it wanted. It redistributed wealth at will. It “guaranteed” a living wage, health care, and plentiful food to everyone. “Equality” was imposed by fiat over the cries of the “neoliberal” opposition.

The only possible answer, the left assumes, must be sabotage by capitalists or — as the Pope reminds us — too much “individualism.”

The problem the global left has in this case, though, is that this narrative simply isn’t plausible. Does Colombia have fewer capitalists and individualists than Venezeuala? It almost certainly has more. So why do Venezuelans wait hours in line to cross the Colombian border to buy basic food items not available in the social-democratic paradise of Venezuela? Has Chile renounced neoliberal-style trade and markets? Obviously not. So why has Chile’s economy grown by 150 percent over the past 25 years while Venezuela’s economy has gotten smaller?

The response consists largely of silence.

This isn’t to say that what the left calls call “neoliberal” is without its faults. Some aspects of neoliberalism — such as free trade and relatively free markets — are the reason that global poverty and child mortality are falling, while literacy and sanitation are rising.

Other aspects of neoliberalism are odious, particularly in the areas of central banking and crony capitalism. But the free-market answer to this was already long-ago voiced by Ludwig von Mises, who, in his own fight against the neoliberals, advocated for consistent laissez-faire, sound money, and far greater freedom in international trade.

For an illustration of the left’s answer to neo-liberalism, however, we need look no further than Venezuela where people are literally starving and will wait hours in line to buy a roll of toilet paper.

And if this is what the the left’s victory against neoliberalism looks like, it’s not surprising the left seems to have little to say.