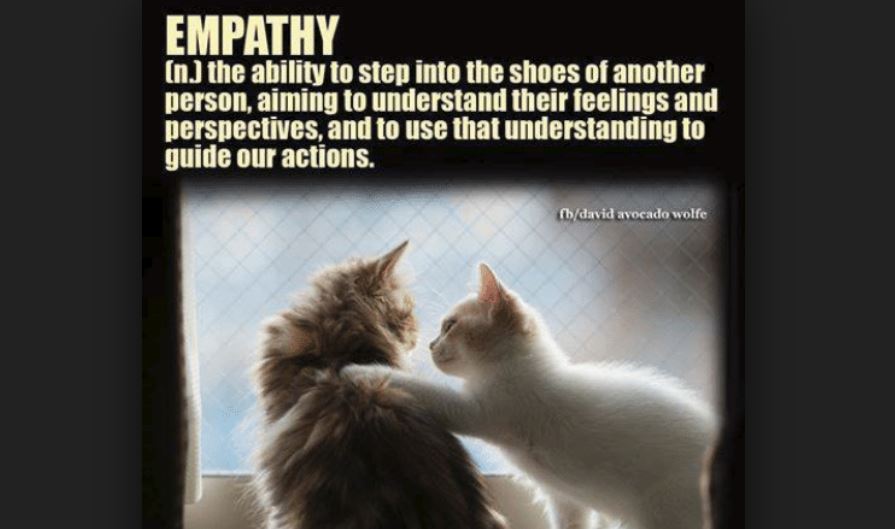 This was what a longtime acquaintance said to me a few months ago after I shared on Facebook a quote from Jeffrey Tucker, a prominent libertarian scholar, which touched on federalism and Donald Trump’s rescinding of an executive order on transgender discrimination.

The comment stuck in my craw.  I place high value on human compassion. And the comment completely sidestepped Tucker’s actual points.

Since that encounter, I began to notice something. People are using that word—“empathy”—an awful lot, sometimes in ways that would seem to run counter to its actual meaning. I noticed it in casual conversations. In news articles. On television.

Was the word empathy really being used more? I decided to consult Google Ngram.

It turns out the 20th century witnessed an enormous upsurge in the use of the word “empathy.” At the turn of the century, the word was barely used in the English language. That began to change—first slowly then rapidly (see below).

What accounts for this change? One reason may be simple linguistics.

The word “empathy” basically means what we once would have called “compassion.” But there’s some confusion on this point.

In a recent article, Jonah Goldberg writes “Empathy is the ability to feel what someone else is feeling … Compassion is when you do something about it.”

Goldberg might be right, but he overlooks that this definition of empathy is precisely what we once understood as compassion, a word that literally means co-suffering; it comes from the Latin prefix “co” (together) combined with the Latin word “passio” (feeling or suffering).

Milan Kundera, in his novel The Unbearable Lightness of Being, beautifully describes compassion, something he calls a sort of “emotional telepathy,” in precisely these terms:

“The secret strength of its etymology floods the word with another light and gives it a broader meaning: to have compassion (co-feeling) means not only to be able to live with the other’s misfortune but also to feel with him any emotion—joy, anxiety, happiness, pain.”

But a simple linguistic explanation seems incomplete. After all, people are using the word compassion much more, too.

What else could be driving the sharp increase in usage of the word empathy? A couple of possibilities: 1) It is a trendy word because it sounds “smart”; 2. It is a form of virtue signaling.

By invoking the term empathy, it is possible that people are signaling both their cultivation and their ability to identify with others. The latter–to feel what others are feeling–is for many people today the ultimate human virtue.

In a similar vein, people may be using the term to signal what they are not. Yale professor Paul Bloom, author of Against Empathy: The Case for Rational Compassion, implies that the term empathy has become, in a sense, the opposite of racism:

“Most people see the benefits of empathy as akin to the evils of racism: too obvious to require justification. I think this is a mistake. I have argued elsewhere that certain features of empathy make it a poor guide to social policy. Empathy is biased; we are more prone to feel empathy for attractive people and for those who look like us or share our ethnic or national background. And empathy is narrow; it connects us to particular individuals, real or imagined, but is insensitive to numerical differences and statistical data. As Mother Teresa put it, “If I look at the mass I will never act. If I look at the one, I will.” Laboratory studies find that we really do care more about the one than about the mass, so long as we have personal information about the one.”

Bloom argues that humans are better off without empathy, noting that “empathetic distress is destructive of the individual in the long run.”

I’m not sure I’m convinced of that, but I think Goldberg has a point when he says that excessive empathy can distract us from rational thought.

In any event, I wonder if many people are using the word empathy because they love the sound and idea of it –  even while they have little interest in genuinely trying to feel or understand people whose perspectives and viewpoints conflict with their own worldview.

By invoking the term, it seems that many are saying, “See, I love and care for people. You should be more like me.” This, of course, is simply a subtler form of moral grandstanding.

What do you think? Does our culture have too much empathy or not enough? Are people who often use the word truly empathetic or are many simply attempting to signal their deep sense of compassion?