Climate Change is Real, The Proof is in the Politics 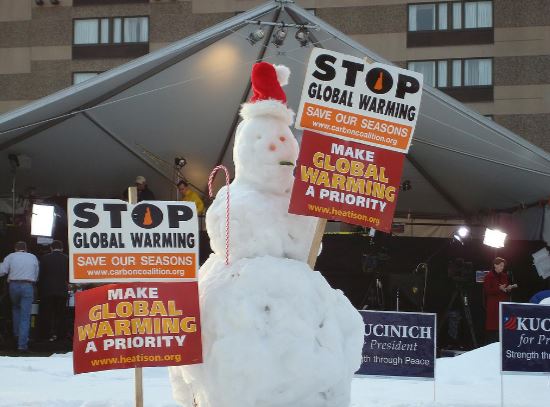 “Most big companies in the U.S. recognize that climate change is real.” So said Geoffrey M. Heal, a professor at Columbia Business School, as quoted in a recent Bloomberg Businessweek article.

Of course climate change is real. It has been for thousands, if not millions of years, long before big companies existed, let alone recognized that climate change was real.

Obviously a response to President Trump’s executive order that rescinds a number of climate-related rules instituted by the Obama administration, the Businessweek article notes that a number of large companies, ranging from Apple to Wal-Mart, will continue their individual pledges to reduce carbon emissions. Such a commitment is commendable as any move to reduce emissions, energy costs and reliance on fossil fuels will pay positive dividends. At least financially. Whether they will have a positive impact on the environment remains to be seen.

Climate change alarmists point almost exclusively to carbon dioxide (CO2) emissions from industrial operations as the root cause of climate change. In 2005 a group of industrialized nations officially implemented CO2-reduction actions as part of the Kyoto Protocols agreement. In spite of the agreement, atmospheric levels of CO2 have not only continued to increase, they have increased at faster rates than prior to the signing.

NASA Climate data specifies that in the 11 years following the signing of the agreement (2005-2016), atmospheric CO2 levels increased from 371.21 parts per million (ppm) to 405.25, an increase of 34.04 ppm. In contrast, according to National Oceanic and Atmospheric Administration data for the 11-year period preceding the Kyoto agreement (January, 1994 through December, 2005) CO2 levels increased only 21.87 ppm, from 358.24 ppm to 380.11 ppm. The rate of increase in atmospheric CO2 levels was therefore 55.65% greater after the Kyoto Protocol agreement went into effect than before.

Additional doubt about the direct relationship between global temperatures and CO2 emissions are raised by the actual data itself. CO2 levels have steadily increased since 1958, yet during that same time period, atmospheric temperatures have both increased and decreased. Such data contradicts a direct cause and effect between CO2 levels and temperature increases.

If rising atmospheric CO2 levels do in fact increase global temperatures by exacerbating the “greenhouse effect”, and if human activity is the primary cause of increased CO2 emissions, why is the industrial use of fossil fuels virtually the sole focus of the science and politics of CO2 emissions reduction?

Referring to a Greenpeace study, Businessweek magazine in 2009 reported, “Carbon released from slash-and-burn techniques, plus the loss of forest themselves, account for some 20% of global greenhouse gas emissions, the study notes, a larger share than that from all the world’s cars, planes, ships, trains, and trucks combined.”

Yet participants in accords such as the Kyoto Protocols appear to have turned a blind eye to the fires raging in what were once pristine jungles.

Models predicting the future climate apocalypse are based on historic patterns. Yet, in its 2007 report, the Intergovernmental Panel on Climate Change (IPCC) states,

“we should recognise that we are dealing with a coupled nonlinear chaotic system, and therefore that the long-term prediction of future climate states is not possible.”

In spite of the IPCC conclusion that climate change is chaotic and nonlinear, governments throughout the world are proceeding as if historic CO2 levels presage a future in which the sky inevitably falls and the planet comes to a boil. All as a result of the burning of fossil fuels. Such is the consequence of politicizing climate science.