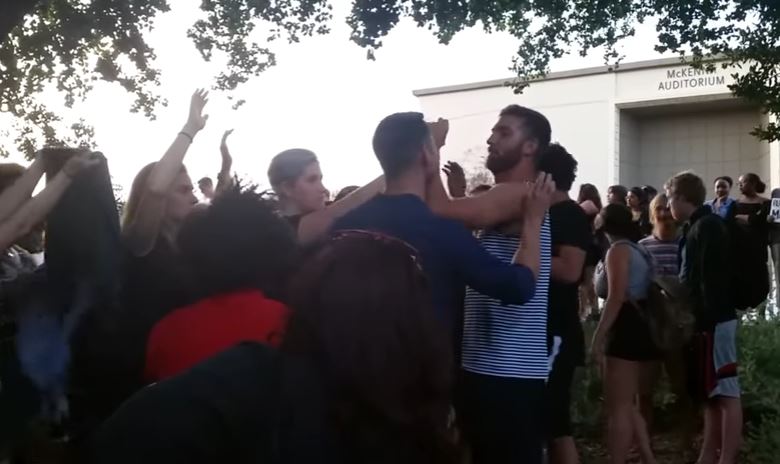 Protesters successfully blocked students and professors from entering an on-campus building to hear Heather Mac Donald’s pro-police speech, as reported by The Daily Signal last Friday. Mac Donald is a senior fellow at the Manhattan Institute, a conservative think tank.

In response, Hiram Chodosh, the president of Claremont McKenna College, or CMC, released a statement Friday, saying, “Blocking access to buildings violates College policy. CMC students who are found to have violated policies will be held accountable.”

Joann Young, director of media relations for CMC, elaborated on Chodosh’s statement, telling The College Fix in an email that students could face a variety of repercussions, including “temporary or permanent separation from the college.”

Steven Glick, a senior at Pomona College, one of the five undergraduate institutions that make up the Claremont Colleges alongside CMC, covered the protests as editor-in-chief of The Claremont Independent, an “independent journal of campus affairs and political thought” that is dedicated to “upholding truth and excellence at the Claremont Colleges,” according to its website. The publication receives no school funding.

“I wasn’t able to speak with many of the protesters and about what they were doing,” Glick said. “Several protesters prevented me from conducting interviews by pushing me, putting their hands and clothing in front of the camera, and shouting over anyone who did try to talk to me. Another correspondent from The [Claremont] Independent was threatened with physical violence while he attempted to interview protesters.”

Glick said it was evident many protesters “had no clue what was going on.”

“They chanted about Palestine for quite a while, which had nothing to do with Heather Mac Donald’s planned lecture,” Glick said. “It seems that protesters simply viewed Ms. Mac Donald as an opponent of progressivism, and felt it apt to chant about any progressive cause they could think of.”

When asked how students have responded to the protest, Glick said, “I get the sense that most students were disappointed that the protests led to the cancellation of the event, whether they agreed with Heather Mac Donald or not.”

As The Daily Signal previously reported, Peter Uvin, vice president of academic affairs for Claremont McKenna College, said in an email to students after the incident that he understands that “words hurt” and “people have strong opinions and different—often painful—experiences with the issues Heather Mac Donald discusses.”

Uvin went on to add that he “could not accept” students’ attempts “to make it impossible for her to speak, for you to listen, and for all of us to debate.”

In reaction to the administration’s response, Glick said:

“The CMC administration should have had a bigger presence at the protest and told the students what consequences, if any, they would face for their actions. By remaining largely absent from the scene, they effectively gave the protesters a free pass.”

This article was republished from the Daily Signal. Read the original article.