New Republic Writer: Blue and Red States Should Go Their Own Ways 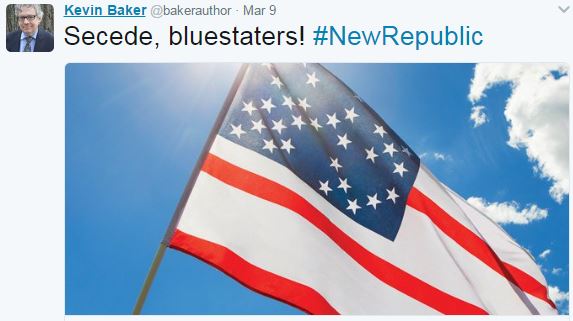 Nearly a week ago in The New Republic, writer Kevin Baker penned an open letter stating that blue and red states should breakup.

In the letter, addressed to “Red State Trump voters,” Baker spends about 4,700 words making an intellectual case for progressivism, insulting people who live in West Virginia and rural Arkansas, and explaining why a Bluexit makes sense for everyone. Here is how the letter opens:

So here’s my modest proposal: You go your way, we go ours.

Baker bluntly states what many progressives might believe but are too tactful (or calculating?) to say: That blue states would be better off without rural America, or what he calls “Food Stamp Red America”:

Truth is, you red states just haven’t been pulling your weight. Not for, well, forever. Red states are nearly twice as dependent on the federal government as blue states. Of the twelve states that received the least federal aid in return for each tax dollar they contribute to the U.S. Treasury, ten of them voted for Hillary Clinton—and the other two were Michigan and Wisconsin, your newest recruits. By the same count, 20 of the 26 states most dependent on federal aid went to Trump.

Baker, whose previous article somewhat ironically was headlined, “The Myth of the Smug Liberal,” continues:

Take Mississippi (please!), famous for being 49th or 50th in just about everything that matters. When it comes to sucking at the federal teat, the Magnolia State is the undisputed champ. More than 40 percent of Mississippi’s state revenue comes from federal funding; one-third of its GDP comes from federal spending; for every dollar it pays out in federal taxes, it takes in $4.70 in federal aid; one in five residents are on food stamps—all national highs. You people—your phrase, not mine—liked to bash Obama for turning America into what you derisively referred to as “Food Stamp Nation.” In reality, it’s more like Food Stamp Red America—something your Trump-loving congressmen will discover if and when they fulfill their vow to gut the program.

If Baker’s argument sounds familiar, it’s probably because you heard it before. It’s essentially the thesis of Thomas Frank’s 2004 work “What’s the Matter with Kansas?”, a book that spent 18 weeks on the New York Times Bestseller List.

Baker and Frank are perplexed as to why red states aren’t more grateful for the federal aid they receive from Washington, D.C. (It never seems to occur to either writer that many people in these states might see federal dollars as a detriment, one that makes people comfortable in their poverty, both economic and intellectual.)

Baker’s plea is not for outright secession. What he proposes is, well, to do what many conservatives and libertarians have pleaded for these many decades:

You want to organize the nation around your cherished principle of states’ rights—the idea that pretty much everything except the U.S. military and paper currency and the national anthem should be decided at the local level? Fine. We won’t formally secede, in the Civil War sense of the word. We’ll still be a part of the United States, at least on paper. But we’ll turn our back on the federal government in every way we can, just like you’ve been urging everyone to do for years, and devote our hard-earned resources to building up our own cities and states. We’ll turn Blue America into a world-class incubator for progressive programs and policies, a laboratory for a guaranteed income and a high-speed public rail system and free public universities. We’ll focus on getting our own house in order, while yours falls into disrepair and ruin.

I suspect that few conservatives or libertarian thinkers would be cowed by this cruel threat, and it’s worth noting that Baker’s essay is getting dinged not from the right, but from the left. The Nation yesterday called his idea “dumb and cruel.” That description was both kind and eloquent compared to the Daily Kos, which said “Blueexit is bullsh*t” and compared Baker to a middleschooler.

Despite the essay’s panning, I’d encourage readers to take the time to read what Baker has to say.

For one, his basic premise is mostly correct: Red states do receive a higher percentage of federal funds. (This doesn’t necessarily make them hypocrites, however.) Second, though Baker’s reasoning and prose are a tad fevered, the essay is well written and highly entertaining. (I appreciated the Virgil “the Turk” Sollozzo reference from The Godfather.) Third, his essay sheds light on some fundamental differences Americans have in respect to its federal government: its proper role; its moral responsibilities; and the constitutional powers it possesses.

The idea of secession sounds crazy. And I imagine this is especially true for those who believe history is essentially a linear march of human progress.Yet trends well before Brexit and Donald Trump suggested that perhaps history was marching in a different direction.

A decade and half ago, when a Trump presidency still seemed an odd, empty threat, Jacques Barzun noted that decentralization, not Globalism, was the prevailing worldwide current as humans entered the 21st century:

Separatism was rampant all over the globe. No sooner was India free of British rule than Pakistan broke away, and no sooner was the new nation separate than Bangladesh freed itself from it. The old Ceylon, a huge Island renamed Sri Lanka, carried on a civil war for more than 20 years, and in the Himalayas, India again fought Pakistan over Kashmir. The East Timorese nearly destroyed Indonesia. Where everyone looked—at Ireland, the Middle East, South America, Southeast Asia, all of Africa, the Caribbean, and the whole ocean speckled with islands, one would find a nation or would-be nation at war to win or prevent independence.

I don’t know if Baker’s Bluexit has hope of succeeding or how seriously he intended his essay to be received.

But one need not wear a tinfoil hat to see that the United States might be heading in that direction.