Media and Trump Share Blame for the Death of Truth 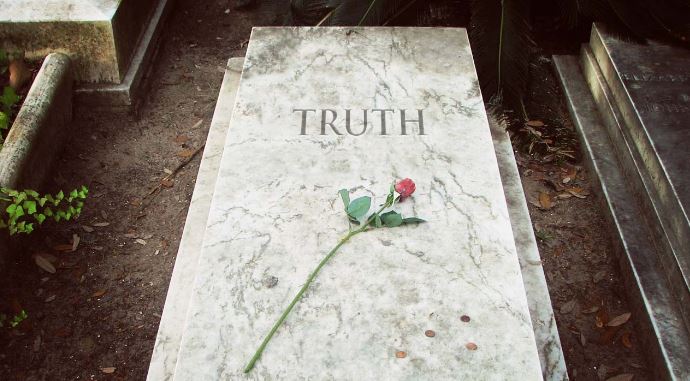 The Washington Post recently criticized President Trump’s Tweetstorm about being wiretapped, mocking his claims as baseless. They argue that he’s sowing dissent and making up facts to distract the media from important issues. The Post neglected to mention that the FBI and other agencies have been surveilling Trump’s advisors, or that in October the FBI obtained a warrant to wiretap Trump’s “associates.”

While the wiretaps were directed at those in Trump’s orbit rather than Trump himself, his accusations have more merit than the Post admits.

This is becoming a trend: the media is eroding its credibility both by publishing factually incorrect stories about Trump and by accusing him of lying even when he’s telling the truth. In short, they’re committing the same heresies against truth that Trump is.

The NBC Fact-Checker, for instance, recently rated Trump’s claim that there were 94 million people out of work as “False.” As economics professor and FEE faculty member Steve Horwitz notes, however, his claim is true.

In similar fashion, when Trump argued that black unemployment was 59%, Politifact rated his claim “Mostly False.” In fact, the numbers check out, as PolitiFact acknowledged when it rated a similar claim by Bernie Sanders as “Mostly True.”

PolitiFact also fact-checks some of Trump’s false statements 5-6 times. This matters because the organization uses aggregates to determine how truthful a politician is and by quintuple-counting Trump’s lies, they’re giving an inflated view of his dishonesty.

One of the longer-lasting and harder-hitting media accusations against Trump has been that Russia manipulated the election in his favor. Yet after months of searching for evidence, not a thing has been found.

However, damage to credibility has already been done. In fact, the resulting public outcry has been so bad that even Democrats – including Michael Morell, former acting CIA chief and public supporter of Hillary Clinton – have been trying to publicize the truth.

Such unreliable reporting also occurs somewhat more subtly in exaggeration, as with Rachel Maddow’s recent reveal of Trump’s 2005 tax return on MSNBC. After nearly three hours of social media-fueled frenzy and monologuing leading to a general hysteria, Maddow disappointed everyone by sharing only two pages of Trump’s tax return and merely stating that Trump did indeed pay an appropriate amount in taxes that year.

Media on both sides have been speaking out against Maddow and her network ever since.

Biased reporting should not come as a surprise. After all, the media is composed of human beings, and we all have biases that color our perspective.

It’s just especially severe in the age of Trump.

As Glenn Greenwald argued, “That prominent journalists are overwhelmingly opposed to Donald Trump is barely debatable; their collective contempt for him is essentially out in the open.”

When prominent media outlets rate Trump’s true statements as false, or invent criticisms of him that leave out crucial facts, they diminish the credibility of legitimate criticisms. When Trump makes unfounded accusations or proposes bad policy, he can deflect criticism by claiming that the media’s lying. This claim carries weight because it’s often true.

Worse, the erosion of credibility within the media can also hurt our democracy.

Many claim that Trump is such a casual liar–lying about things that make little sense, like voter fraud in an election he won–because blurring the line between truth and fiction helps him gain power.

Hannah Arendt, author of The Origins of Totalitarianism, argues that authoritarian regimes tend to prefer subjects who don’t have a handle on the truth, because it leaves them unmoored and more reliant on the nation’s leader for answers. The Economist points out that post-truth politics has been on the rise in Poland, Turkey, and Russia–none known as beacons of freedom.

To the extent that Trump is working from a similar authoritarian impulse, citizens who are growing weary of fact-checking everything are eventually likely to give up and check out instead.

But a media that sabotages its own credibility only makes things worse.

If journalists were more diligent in keeping their own biases in check – by slowing down, following up on extraordinary claims, limiting their reliance on anonymous sources and rumors, and generally approaching their job with extra skepticism when a story feels too good to be true – then it would be much more difficult to turn the United States into a post-truth nation. Instead, major news outlets would anchor us with their solid, high-quality reporting.

It is much easier to see a lie when only one party has a reputation for lying.

The result has been a steady erosion in the very values of truth and objectivity.

This erosion also deepens partisan divides. According to a PEW research poll in January, “Fully 86% describe the country as more politically divided today than in the past.”

Bridging the divide would require common ground, and one way to establish that is with a common set of credible facts. However, when each side lies about the other, this common ground shrinks. Additionally, valid criticisms of both sides inflame the other by making their opponents look post-truth. When Trump supporters can point to bias on the part of fact-checkers like PolitiFact, it makes them less likely to trust these sources.

One core element of a civil society is the extent to which people who disagree ideologically can agree on basic facts. Truth, when it’s accepted by people on both sides of the aisle, moors society and facilitates common ground. Its erosion has far-reaching consequences for everyone.