‘Logan’ and the Challenges of Fatherhood 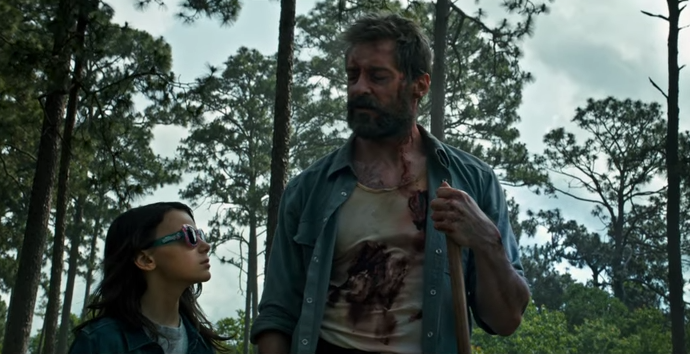 Hugh Jackman has been playing Wolverine for seventeen years and nine films, longer than his young co-star Dafne Keen has been alive. In Logan, his R-rated and final ride as the adamantium-clawed mutant, Jackman embraces his age and experience to play a grizzled, broken-down Wolverine, a man of violence who has lost his way—until a young girl in need offers a chance for something like redemption. Ultimately, Logan tells a story of an age-old fighter taking on a challenge greater than any he has before: fatherhood.

Logan is a violent, even ultra-violent movie. The R-rating is no lie: the film’s bloody battle scenes are not for the faint-hearted. But if Logan is allowed to use his claws to bloodier effect than in any previous film, the toll his life takes on him is also painted vividly. This movie is well aware that even righteous violence brands the souls of its perpetrators—and so is Logan himself, as he pushes his protégée Laura away from the path of becoming a living weapon. In this Western-tinged world of weary, worn-out warriors, there’s a quiet religious streak, a faint hope of a promised land. As Wolverine puts his body on the line for a daughter he never knew, the X-Men’s X has never looked more like a St. Andrew’s Cross.

Wolverine’s healing factor has slowed down in this film, leaving him more physically vulnerable—just as his newfound role as a caretaker makes him more emotionally vulnerable than he was as a growling maverick. The film underlines the traumatic nature of aging with a major role for Patrick Stewart as Professor Xavier, once the X-Men’s leader, now a danger to everyone around him thanks to the combination of his degenerative brain disease and his psychic powers. Logan, the most unruly of Xavier’s surrogate mutant children, is now the last one left to care for him. Some sparse but effective world-building hints at why Logan, Xavier, and the albino Caliban are the last vestiges of the X-Men. These men, with their deteriorating minds and bodies, are an odd fit for the power fantasy of the superhero genre—which makes the film far more interesting, as it becomes instead about whether tarnished and wounded people can nonetheless do good.

Back in 2000, Jackman, Stewart, and the first X-Men film ushered in the era of superhero films in which we now live. We should count ourselves fortunate that they have stuck around long enough to film this send-off in a genre that is now wide enough to include such an intimate, melancholic film about fatherhood and sacrifice.

Logan wears its influences on its sleeve: Director James Mangold has his characters watch scenes of Shane on a hotel TV, and Johnny Cash plays over the credits. Here is the superhero as aging gunslinger, a midnight rider who knows God’s gonna cut him down. And it works. The scenes of familial bonding among the odd trio of Logan, Xavier, and Laura are surprisingly touching. The best part is seeing Logan, once a feral berserker, gruffly instruct the lab-raised Laura on the niceties of social interaction, like using silverware, and not shoplifting.

Though Logan’s world is dark, there’s a defiant decency in many of the side characters, from the nurse who saved Laura from scientific captivity to the farm family that offers the heroes a home-cooked meal. Like our protagonists, the setting is scarred but not irretrievably broken—there are forms of love and service humble enough that no dystopian future or scientific regime can stamp them out.

One of those humble, persistent loves is the responsibility of fatherhood. The film provocatively suggests that it can be easier to harden yourself to fight for someone than to soften your heart enough to give them care. The story calls on old man Logan both to protect his cub and to open up to her—even if the latter is, for him, much more wrenching.

There’s even an idealistic aura surrounding comic books themselves in the movie. In this dusty-hued film, a few brightly-colored X-Men comic books figure in the plot—and though Logan scoffs at them as fabrications, it turns out even the fictional example of comic book heroism can inspire real virtue in the next generation. In the moody landscape of Logan, that’s a welcome ray of hope.