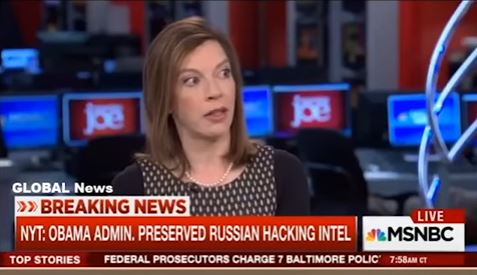 I’ve been loath to write a word on Russia-gate because there is too much fevered chatter across the political spectrum.

Here is what Farkas, a former assistant defense secretary under President Obama, told Mika Brzezinski in regards to efforts to gather, expose, and disseminate information on the Trump Campaign:

“I was urging my former colleagues, and, frankly, speaking the people on the Hill, it was more actually aimed at telling the Hill people, get as much information as you can, get as much intelligence as you can, before President Obama leaves the administration…

Because I had a fear that somehow that information would disappear with the senior [Obama] people who left, so it would be hidden away in the bureaucracy … that the Trump folks – if they found out how we knew what we knew about their … the Trump staff dealing with Russians – that they would try to compromise those sources and methods, meaning we no longer have access to that intelligence.

So I became very worried. Because not enough was coming out in the open and I knew that there was more. We have very good intelligence on Russia. So then I had talked to some of my former colleagues and I knew that they were also trying to get information to the hill….

That’s why you have the leaking. People are worried.”

Farkas, who served as advisor to Hillary Clinton during the 2016 election, is quite clear on several points: 1. The government was gathering intel on the Trump Campaign; 2. Former and current officials in the Obama administration were working to disseminate the intel; 3. Efforts were made to conceal how the intelligence was gathered; 4. She and others believe Donald Trump or members of his team had nefarious ties to Russia.

If you ask most Americans, I suspect a majority would say they already know the truth about Russia-gate. Trump critics would say he’s guilty and going down. Trump defenders are likely to say the whole story is fake news orchestrated by a tired and reeling Democratic establishment.

The truth is we have no idea right now. Former Acting CIA Director Michael Morell, a Clinton supporter, was quite clear on this point in a recent interview with NBC:

“On the question of the Trump campaign conspiring with the Russians here, there is smoke, but there is no fire, at all…

It’s quite possible Farkas and company will be vindicated in their efforts. If the intelligence on Russia is as good as she claims, and shenanigans did indeed occur, it’s only a matter of time before there is a revelation that sinks Donald Trump or someone in his inner circle. (It’s a shame Brzezinski didn’t actually ask Farkas for some of the juicy intel she alluded to.)

On the other hand, the prudent mind must consider the possibility that Russia-gate was a self-fulfilling prophecy. Think about it for a minute.

Government officials (presumably) requested and received warrants to spy on a presidential contender. The contender went on to win the presidency. Government and White House officials officials see vast amounts of circumstantial evidence (“smoke,” to use Morell’s term). They act quickly, disseminating the intel and concealing how it was gathered.

At that point these folks are what we call in poker “pot committed”. They are now invested in the idea that a Trump-Russia conspiracy truly exists, because it could be quite problematic for them if that conspiracy does not and did not exist.

“That’s why you have the leaking,” Farkas said at the end of her interview. “People are worried.”