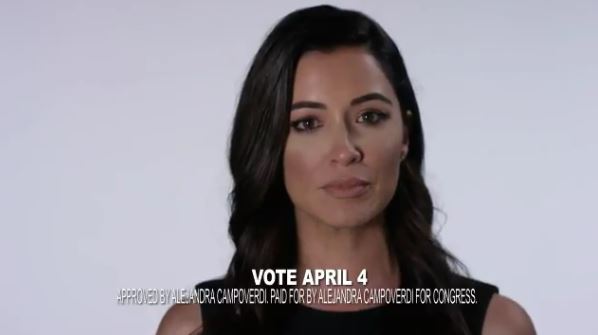 “If Donald Trump wants to have a conversation about women’s bodies,” says Alejandra Campoverdi, “let’s start with mine.”

WATCH: I refuse to let @realDonaldTrump & Republicans play politics with our lives – healthcare is a fundamental human right. #CA34 pic.twitter.com/VC829oe0FJ

It turns out there is already a discussion about Campoverdi’s body happening—just not the one she wants.

The 37-year Harvard graduate posed for the men’s magazine Maxim in 2004 (see pic below). She explains in Cosmo:

Almost 15 years ago, I worked as a model. My time as a model was short and it helped me pay some bills.

After President Obama was elected, I was appointed to work in the White House, initially in the chief of staff’s office and later serving as the first ever White House deputy director of Hispanic media. This moment was the fulfillment of dreams that a younger me could have never conceived, and I felt a deep sense of responsibility to translate that perspective into action at the highest level.

Then the photos hit.

Campoverdi wrote that she cried for a week when the photos went viral. Now, eight years later, she is upset that the subject is coming up again.

[W]hen I recently found myself forced to answer questions about Maxim by a reputable newspaper in my official announcement for Congress, I knew I had to speak out about this double standard. Enough already.

Men get to be broad and complicated and contradictory. Yet as women, we aren’t granted the whole person. We get typecast as the Sexy One, the Brainy One, the Girl Next Door. We don’t create these boxes for ourselves and usually don’t agree to them, so why should we have to live within them? Women shouldn’t need to choose between being intelligent and being feminine. Female sexuality and intelligence are not inversely related.

Campoverdi is correct that “female sexuality and intelligence are not inversely related.” But is there really a double standard?

I seem to recall a certain contender for U.S. Senate in Massachusetts (Scott Brown) roundly mocked for some steamy photos he posed for while a young man, images that naturally resurfaced during his run for U.S. Senate.

“I’m not ashamed of my body,” the young Brown said. “I work hard enough to keep it in shape. When you go to the beach, you automatically seek out the best bodies, female and male. Why should it be different in a magazine?”

From what I can see, if there was a double standard, it was that some media saw fit to mock the physical characteristics of Brown’s body.

Jezebel, for example, suggested that Brown’s genitalia was small since it was “coyly” hidden behind his wrist. I suspect that a writer at any mainstream publication who made critical comments about Campoverdi’s body would find himself on the employment line the next day.

Is it big deal that Campoverdi posed for Maxim more than a decade ago? No, not in my opinion; not in the least.

But her indignant response to a question about posing in Maxim strikes me as over the top, as does her suggestion that such a question manifests the misogynistic nature of our culture. It’s yet another example of people seeking empowerment through victimhood.

If you allow people to take sexy photos of you, it’s empowering to an extent. You can make money. You can become famous. Maybe you can even marry someone rich. But you also give others power over you, at least to some degree–just ask Melania Trump.

It’s always been that way, and it applies for both men and women. At least Campoverdi doesn’t have to put up with media jokes about her genitalia.