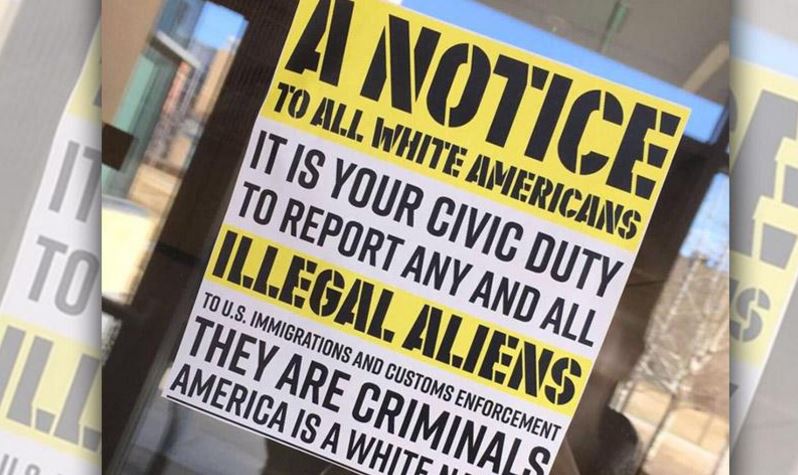 At Gustavus Adolphus College, the Diversity Leadership Council (DLC), with the help of several student-led social justice groups, decided to try a social experiment. They posted fake flyers with racially provocative messages on the theory that they would generate respectful dialogue about hate, intolerance, discrimination and diversity.

The flyers read:  “A Notice to All White Americans. It is Your Civic Duty to Report Any and All Illegal Aliens to U.S. Immigrations and Customs Enforcement. They are Criminals. America is a White Nation.”

It sounds like a hoax. However, the DLC experimenters said they sincerely believed that the posters would evoke a positive reaction. Through duplicity, they hoped to create a learning moment. Research shows, however, that negative diversity experiences can undermine a college student’s learning.

According to The College Fix, several students experienced fits of rage upon seeing the messages, leading them to tear the posters down. Anger was not the reaction the experimenters expected. Eventually the DLC members confessed that they posted the fake posters and apologized for their poor judgment:

“We understand that the language in these images may be hurtful — we apologize to those who were negatively impacted. [ … ]  We want to help put an end to bias-related incidents that happen on our campus, social media, and in our communities by forcing individuals to have dialogues about forms of hate and bias. [ … ] We hope that members of the campus community will reflect on today’s events and join us in ensuring that no one student or group of students are ever a victim of this form of discrimination.”

The DLC’s social experiment could give the term ‘race-baiting’ a whole new meaning.

Merriam-Webster defines race-baiting as “the unfair use of statements about race to try to influence the actions or attitudes of a particular group of people.” Traditionally, race-baiting was used in America to incite fear and hate against marginalized racial minorities, particularly African-Americans (see below).

However, conservatives today claim race-baiting is more often used to smear others as racist. According to Conservapedia, for example, ‘race-baiting’ is defined as the following:

“… a unique, deliberate and hypocritical focus on race in an attempt to discredit others as ‘racist’. An important component of race baiting is for the indictor to appear ‘factual’, ‘neutral’, ‘unbiased’, a person truly above racism’s perversion. Others are unapologetic about racial bias, referring to groups whether guilty or innocent, as rotten people that have to be exposed.”

Now it’s uncertain whether the DLC’s intention was to bait Gustavus Adolphus College students with conservative views on immigration into agreeing with the fake flyer messages. Most likely, the posters were so outrageous that no intelligent, young conservative student would take the bait. Nevertheless, the trickery is a clear misrepresentation of an important and divisive issue.

So, does this social experiment serve any purpose besides provoking outrage and undermining student learning?  How might the DLC’s members have created a genuine opportunity for tolerant and respectful dialogue among their fellow students?